The Paralympic symbol consists of three agitos, coloured red, blue and green, the three colours that are most widely represented in national flags around the world.

The symbol of the Paralympic Games is composed of three "agitos", coloured red, blue, and green, encircling a single point, on a white field. The agito ("I move" in Latin) is a symbol of movement in the shape of an asymmetrical crescent. The Paralympic symbol was created by the Scholz & Friends agency and approved in April 2003.[1][2]

The colours of the agitos with the white background stand for the three colours that are most widely represented in national flags around the world. The three agitos encircle a centre point, to emphasize "the role that the International Paralympic Committee (IPC) has of bringing athletes from all corners of the world together and enabling them to compete". The shape also symbolises the Paralympic vision "To Enable Paralympic Athletes to Achieve Sporting Excellence and to Inspire and Excite the World".[1][2]

The first designated Paralympic logo was created for the 1988 Summer Paralympics in Seoul and based on a traditional Korean decorative component called a pa {Hangul: 파; Hanja: 巴}, two of which make up the taegeuk symbol at the center of the flag of South Korea. The first Paralympic flag used five pa arranged similarly to the Olympic Rings, but not interlocking, and in identical colors to the Olympic rings: blue, black, red, yellow and green.[1][2]

Picture of the emblem for the 2012 Summer Paralympics in London. 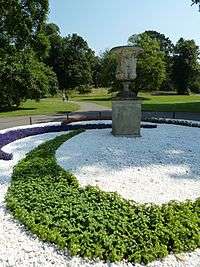 Floral display in Kew Gardens of the Paralympic symbol during the 2012 Summer Paralympics in London.

The current Paralympic flag was first flown during the Closing Ceremony of the Athens Paralympic Games in 2004.

Until the 2010 Winter Paralympics, the host country chose the site and the method through which the Paralympic Torch was lit.[17] Since the 2012 Summer Paralympics, the concept of the Paralympic Torch Relay has changed and the Official Paralympic Flame is always created in the Games host city by uniting different regional flames. For London 2012 four regional flames from the national capitals of London, Belfast, Edinburgh and Cardiff were brought together in Stoke Mandeville, the birthplace of the Paralympic movement, on 29 August 2012 to create the London 2012 Paralympic Flame. In the future not only flames from regions of the host country will be united, but also other international flames.[18] As such Stoke Mandeville will feature in all future Paralympic Torch Relays with the lighting of the Heritage Flame which will then travel to the host city to join all other flames.[19] During the final 1–2 days the torch follows a linear relay route and, on the day of the Opening Ceremony, the flame reaches the main stadium and is used to light a cauldron situated in a prominent part of the venue to signify the beginning of the Games. Then it is left to burn throughout the Games till the Closing Ceremony, when it is extinguished to signify the end of the Games.

For the first time, on 1 March 2014, Stoke Mandeville ran the first ever Heritage Flame lighting ceremony in advance of the Sochi 2014 Winter Paralympics. An Armillary Sphere has been created which will be used at all future Heritage Flame events to create the spark by human endeavor of a wheelchair user. London 2012 paralympian Hannah Cockroft was the first person to create the spark where Caz Walton lit the Sochi Torch and Cauldron, Andy Barlow transferred the flame to Sochi and finally Denise Knibbs lit the Paralympic lantern.[20] 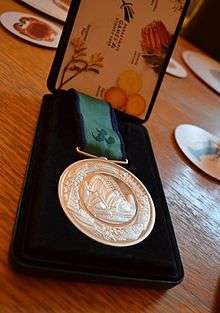 The Paralympic medals awarded to winners are another symbol associated with the Paralympic Games. The medals are made of gold-plated silver (commonly described as gold medals), silver, or bronze, and awarded to the top 3 finishers in a particular event.

For each Paralympic Games, the medals are designed differently, reflecting the host of the games.

The Paralympic Anthem, also known as the Paralympic Hymn, is played when the Paralympic Flag is raised. It is a musical piece, "Hymn de l’Avenir" (en. "Anthem of the Future") composed by Thierry Darnis. The anthem was approved by the IPC in March 1996.[21]

Australian country singer Graeme Connors wrote the lyrics for the anthem in 2001.[22]

The athlete, from the team of the organizing country, holds a corner of the Paralympic Flag while reciting the oath:

In the name of all the competitors I promise that we shall take part in these Paralympic Games, respecting and abiding by the rules which govern them, committing ourselves to a sport without doping and without drugs, in the true spirit of sportsmanship, for the glory of sport and the honour of our teams.[23]

The judge, also from the host nation, holds a corner of the flag but takes a slightly different oath:

In the name of all the judges and officials, I promise that we shall officiate in these Paralympic Games with complete impartiality, respecting and abiding by the rules which govern them in the true spirit of sportsmanship.[24]

The coach, from the host nation, holds a corner of the flag but takes a slightly different oath:

In the name of all coaches and other members of the athletes entourage, I promise that we shall commit ourselves to ensuring that the spirit of sportsmanship and fair play is fully adhered to and upheld in accordance with the fundamental principles of the Paralympic movement.

Athletes and judges that have taken the Paralympic Oath are listed below.[23][25]

See also: List of recipients of the Paralympic Order

Each Paralympic Games have a mascot, usually an animal native to the area or occasionally human figures representing the cultural heritage. Nowadays, most of the merchandise aimed at young people focuses on the mascots, rather than the Paralympic flag or organization logos.