The Brazil Independence Cup was an international football tournament held in Brazil, from 11 June to 9 July 1972, to commemorate the 150th anniversary of the Brazilian Declaration of Independence. It was called the Minicopa by the Brazilians and the final was between Brazil and Portugal, in the Maracanã Stadium. Brazil won 1-0, with Jairzinho scoring in the 89th minute.

Pelé no longer played for Brazil. Brazil had Jairzinho, Tostão and Rivelino, who also played in the 1974 FIFA World Cup, in West Germany.

Despite Portugal's quality results and team, including Benfica players such as Eusébio, Jaime Graça, José Henrique, Humberto Coelho, Rui Jordão, and Toni, the team missed the World Cup 1974 and 1978 qualifying matches, so this tournament was their best result until the 1984 European Football Championship. 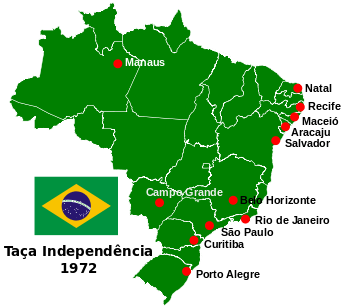 Host cities of the Taça Independência