The Mexican Football Federation (Spanish: Federación Mexicana de Fútbol Asociación, A.C., FMF, MFF or FEMEXFUT) is the governing body of association football in Mexico. It administers the Mexico national team, the Mexican league and all affiliated amateur sectors, and is in charge of promoting, organizing, directing, spreading, and supervising competitive football in Mexico. 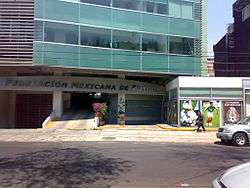 The Mexican Football Federation's governing body is the General Assembly that conforms with the participation of the Primera Division with 55% of the votes; Liga De Ascenso with 5%; Segunda División, with 18%; Tercera División, with 13%, and the Amateur sector, with 9%. Its executive and administrative body is the National Council, which comprises five members, one from each of the divisions mentioned, and are elected every four years.[2]

The league is composed of four professional divisions: Liga MX, Ascenso MX, Segunda División, and Tercera División. The Superliga is the top level of women's football in Mexico.

The issue of multi-team ownership has been a highly debated one within the owners of the professional football clubs and the Femexfut. Out of Mexico’s 33 clubs in the top two divisions, seven ownership groups control almost half the teams. Group Televisa (Club América, Necaxa), Grupo Salinas (Atlas, Morelia), Oceanografía (Querétaro, Delfines), the Lopez Chargoy brothers (Puebla, Chiapas), Grupo Caliente (Club Tijuana, Dorados de Sinaloa) and Grupo Pachuca-Grupo Carso (León, Pachuca, Estudiantes Tecos) wield much influence. Most of the owners that have more than one team have them split between the first and second divisions and are in place partly to promote player development.[3]

In May 2013, the owners of the 18 Liga MX clubs voted in favor of a proposal to ban one person or company from owning more than one team. The proposal was introduced after Carlos Slim, whose telecommunications company América Móvil owns a 30% stake in Grupo Pachuca,[4] was rumored to want to acquire Guadalajara (a move he ultimately ruled out). The ruling will not require club owners to sell one of their current Liga MX teams, but will prevent them from acquiring any more.[5]

The issue was once again prevalent in November 2013 when TV Azteca, owner of Monarcas Morelia, paid out 124 shareholders of Club Atlas US$50 million to acquire the club which for years had been struggling financially.[6]