For other uses, see DFB (disambiguation).

The German Football Association (German: Deutscher Fußball-Bund [ˈdɔʏ̯t͡ʃɐ ˈfuːsbalbʊnt]; DFB [deːʔɛfˈbeː]) is the governing body of football in Germany. A founding member of both FIFA and UEFA, the DFB has jurisdiction on the German football league system and is in charge of the men's and women's national teams. The DFB headquarters are based in Frankfurt am Main. Sole members of the DFB are the German Football League (German: Deutsche Fußball Liga; DFL), organising the professional Bundesliga and the 2. Bundesliga, along with five regional and 21 state associations, organising the semi-professional and amateur levels. The 21 state associations of the DFB have a combined number of more than 25,000 clubs with more than 6.8 million members, making the DFB the single largest sports federation in the world.

Historical logo of the DFB ca. 1911, in National colours of Germany of the time

From 1875 to the mid-1880s, the first kind of football played in Germany was according to rugby rules. Later, association-style football teams formed separate clubs, and since 1890, they began to organise on regional and national levels.

The DFB (Deutscher Fußball-Bund) was founded on 28 January 1900 in Leipzig by representatives of 86 clubs. The vote held to establish the association was 62:22 in favour (84 votes). Some delegates present represented more than one club, but may have voted only once. Other delegates present did not carry their club's authority to cast a ballot. The DFB consolidated the large number of state-based German regional competitions in play for a single recognized national title for the season 1902/03. Germans were not present in Paris when FIFA was founded by seven nations in May 1904, but by the time the FIFA statutes came into effect on 1 September, Germany had also joined by telegram as the eighth nation. The German national team played its first game in 1908.

Before 1914, the German Empire was much larger than today's Germany, comprising Alsace-Lorraine and the Eastern provinces. The borders of the regional associations were drawn according to suitable railway connections. Also, teams based in Bohemia, then part of Austria-Hungary, were eligible, as they were German Football clubs and thus considered German. Thus, a German team from Prague was runner-up in the German championship. On the other hand, clubs of the Danish minority in Northern Schleswig refused to join the DFB. This area after World War I voted to join Denmark. Due to borders changes imposed by the Treaty of Versailles, the DFB had to adopt its structure. The Saarland, Danzig, and the Memelland were detached from Germany and East Prussia was cut off from the main part by the Polish Corridor.

The role of DFB and its representatives like Felix Linnemann under Nazi Germany was documented in 100 Jahre DFB and by Nils Havemann in Fußball unterm Hakenkreuz.[1] According to Gleichschaltung policy, the DFB, with its large membership from all political sides, and strong regional structures compared to weak national ones, submitted to new rulers and new Gau structures. On a short general meeting on 9 July 1933 in Berlin, the DFB did so, at least formally. Later, the Hitler salute was made compulsory; Marxists and Jews were expelled. A new organization, Deutscher Reichsbund für Leibesübungen (German Reich League for Physical Exercise), was established and Linnemann was appointed leader of its Fachamt Fußball (Football section), which took over the operational affairs, whereas the DFB lost most of its duties until it was formally dissolved in 1940.

On the pitch, Germany had done well in 1934, but after a 0–2 loss in the 1936 Summer Olympics, with Adolf Hitler attending, the DFB and football fell from grace. Reichsjugendführer Baldur von Schirach and the Hitler Youth took over youth football (under 16) from the clubs following a deal with Reichssportführer Hans von Tschammer und Osten, who had been in charge of all sports in Germany since 1933, making DFB officials even more powerless. Germany had made a bid to host the 1938 World Cup, but it was withdrawn without comment.

Following the Anschluss in March 1938 that made Austria part of Germany, the Austrian Football Association became part of the German federation. New coach Sepp Herberger was told on short notice to use also Austrian players in his team, which was eliminated in the first round of the World Cup, weakening the situation of football within Nazi politics to near meaninglessness. Four Germans (Hans Jakob, Albin Kitzinger, Ludwig Goldbrunner, and Ernst Lehner) represented West Europe in a FIFA friendly on 20 June 1937 in Amsterdam, and another two (Kitzinger again and Anderl Kupfer) represented a FIFA continental team on 26 October 1938 in London, England. During the war, Germany played international games until 1942.

In the aftermath of World War II, German organisations were disbanded by the allies. FIFA decided in November 1945 to ban the no longer existing DFB (and Japan's football association) from international competition. Internationally, Germans were still represented, with Zürich-based Ivo Schricker serving as General Secretary of FIFA from 1932 to December 1950. In 1948, Switzerland requested FIFA to lift the ban on games against Germans, but this was denied. Swiss clubs played German clubs anyway, but had to cease doing so due to international protests. This was only changed in 1949 when The Football Association requested FIFA to lift the ban on club games. FIFA did so on 7 May 1949, two weeks before the Federal Republic of Germany was founded, thus games required permission by the military governments of the time.

Due to partition into several occupation zones, and states, the DFB was legally re-founded in Stuttgart on 21 January 1950 only by the West German regional associations, without the Saarland Football Association in the French occupied Saarland, which on 12 June 1950 would be recognized by FIFA as the first of three German FAs after the war. At the FIFA congress held on 22 June prior to the 1950 FIFA World Cup in Brazil, the Swiss Football Association requested that the DFB be reinstated with full FIFA membership, which was granted on 22 September 1950[2] in Bruxelles. Thus, Germany was excluded from the 1950 FIFA World Cup and could resume international games only in late 1950.

In the early years of the division of Germany, West Germany claimed exclusive mandate of all of Germany. Unlike the IOC, which granted only provisional recognition to the East Germans in 1955, demanding they participate in an All-German Olympic team (Unified Team of Germany), FIFA fully recognized the East German Football Association in 1952. Winning the 1954 World Cup was a major success for the DFB, and the popularity of the sport in Germany.

The teams of the DFB and the Saarland were squared off in the Qualifiers for the 1954 WC before the Saarland and its FA was permitted to rejoin Germany and the DFB in 1956.

Due to that success, and due to regional associations fearing to lose influence, the old amateur structure, in which five regional leagues represented the top level, remained in effect longer than in many other countries, even though a Reichsliga had been proposed decades ago. Also, professionalism was rejected, and players who played abroad were considered "mercenaries" and not capped (perhaps most famously Bert Trautmann). The conservative attitude changed only after disappointing results in the 1962 World Cup when officials like the 75-year-old Peco Bauwens retired. According to the proposals of Hermann Neuberger, the DFB finally introduced a single nationwide professional league, the Fußball-Bundesliga, for the 1963–64 season.

The DFB has hosted the World Cup in 1974 and 2006. Germany also hosted the 1988 European Championship. Upon reunification in 1990, the East German Deutscher Fußball-Verband der DDR (DFV) was absorbed into the DFB.

The DFB has also overseen the rise of Germany as a world power in women's football. The national team has won World Cups in 2003 and 2007—the latter without conceding a goal in the final tournament, making them the only World Cup champions for men or women to do so. Furthermore, the women's national team's victory in 2003 made Germany the only nation to have won both the Men's and Women's World Cups. They have also won eight UEFA Women's Championships, including the last six in succession.

In 1990, mere months before reunification became official, the DFB founded the women's Bundesliga (Frauen-Bundesliga), directly modeled after the men's Bundesliga. Initially, it was played in north and south divisions, but became a single league in 1997. Bundesliga teams have enjoyed more success in the UEFA Women's Champions League than those from any other nation; four different clubs have won a total of seven titles, with the most recent being 2015 champions 1. FFC Frankfurt. 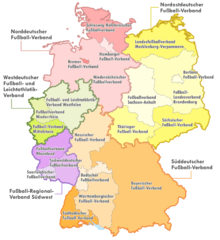 The DFB is organised into five regional associations, which themselves are sub-divided into 21 state associations. These associations typically have their boundaries run along the borders of the German states, with the exception of some states (North Rhine-Westphalia, Rhineland-Palatinate and Baden-Württemberg) having up to three state associations covering different areas of such state.

The Southern German Football Association (German: Süddeutscher Fußball-Verband; SFV) covers the states of Baden-Württemberg, Bavaria and Hesse. The SFV, formed on 17 October 1897 under the name of Verband Süddeutscher Fußball-Vereine, originally administered the Southern German football championship, until it was dissolved by the Nazis in 1933. Reformed in the American occupation zone after the Second World War, it operated the Oberliga Süd, the regional division of the former lop level German Oberliga until the introduction of the Bundesliga in 1963. Since the 2012–13 season, the SFV, except its member Bavarian FA, along with the Football Association of the Southwest is in charge of the Regionalliga Südwest, a step 4 division in the German football league system. The SFV itself is formed by the following state associations:[3]

The Regional Football Association South West (German: Fußball-Regional-Verband Südwest; FRVS) covers the states Rhineland-Palatinate and Saarland and was formed after the Second World War in the French occupation zone in Germany. Its highest league until the introduction of the Bundesliga in 1963 was the Oberliga Südwest, the regional division of the former lop level German Oberliga. Since the 2012-13 season, the FRVS, along with the Southern German football association is in charge of Regionalliga Südwest, a step 4 division in the German football league system. Additionally, the FRVS administrates the Oberliga Rheinland-Pfalz/Saar, a step 5 division. The FRVS itself is formed by the following state associations:[4]

The Western German Football Association (German: Westdeutscher Fußballverband; WDFV) covers the state of North Rhine-Westphalia. The association was known as WFLV from 2002 to 2016 and used to administer the Western German football championship until 1933. From 1947 to 1963, its highest league was the Oberliga West, the regional division of the former lop level German Oberliga. Since the 2008-09 season, the WDFV is in charge of the Regionalliga West, a step 4 division in the German football league system. The WDFV itself is formed by the following state associations:[5]

The Northern German Football Association (German: Norddeutscher Fußball-Verband; NFV) covers the states of Bremen, Hamburg, Lower Saxony and Schleswig-Holstein. The association used to administer the Northern German football championship until 1933. From 1947 to 1963, its highest league was the Oberliga Nord, the regional division of the former lop level German Oberliga. Since the 1994-95 season, the NFV is in charge of the Regionalliga Nord, a step 4 division in the German football league system. The NFV itself is formed by the following state associations:[6]

The Northeastern German Football Association (German: Nordostdeutscher Fußball-Verband; NOFV) covers the states of Berlin, Brandenburg, Mecklenburg-Vorpommern, Saxony, Saxony-Anhalt and Thuringia. The association is the youngest of the five regional associations, having been formed after German reunification in 1990 as a successor of the disbanded German Football Association of the GDR. Since the 2012-13 season and previously from 1994 to 2000, the NOFV administers the Regionalliga Nordost, a step 4 division in the German football league system, and the step 5 Oberliga Nordost. The NOFV itself is formed by the following state associations:[7] 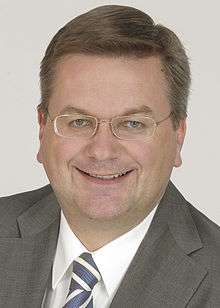 The official mascot is an eagle with black feathers and yellow beak called "Paule" (since 26 March 2006).