3GP (3GPP file format) is a multimedia container format defined by the Third Generation Partnership Project (3GPP) for 3G UMTS multimedia services. It is used on 3G mobile phones but can also be played on some 2G and 4G phones.

3G2 (3GPP2 file format) is a multimedia container format defined by the 3GPP2 for 3G CDMA2000 multimedia services. It is very similar to the 3GP file format, but has some extensions and limitations in comparison to 3GP.

3G2 is defined in the 3GPP2 technical specification.[6] 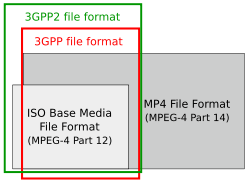 Relations between ISO Base Media File Format, MP4 File Format, 3GPP file format and 3GPP2 file format. Based on the 3GPP2 technical specification published on 18 May 2007.[7]

3GP and 3G2 are similar standards, but with some differences:

Some cell phones use the .mp4 extension for 3GP video.

A 3GP file is always big-endian, storing and transferring the most significant bytes first.

3GP files can be encoded and decoded with open source software FFmpeg.[14]