WebP is an image format employing both lossy[6] and lossless compression. It is currently developed by Google, based on technology acquired with the purchase of On2 Technologies.[7] 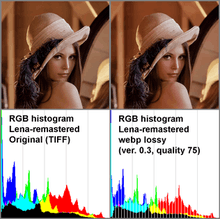 Lenna test image compressed using version 0.30 lossy WebP compression at quality 75 with accompanying RGB histograms. Note the breaks in the histogram of the compressed image compared to the source.

As a derivative of the VP8 video format, it is a sister project to the WebM multimedia container format.[8] WebP-related software is released under a BSD license. [9]

On November 18, 2011 Google began to experiment with lossless compression and support for transparency (alpha channel) in both lossless and lossy modes; support has been enabled by default in libwebp 0.2.0 (August 16, 2012).[12][13] According to Google's measurements, a conversion from PNG to WebP results in a 45% reduction in file size when starting with PNGs found on the web, and a 28% reduction compared to PNGs that are recompressed with pngcrush and PNGOUT.[14]

Google has proposed using WebP for animated images as an alternative to the popular GIF format, citing the advantages of 24-bit color with transparency, combining frames with lossy and lossless compression in the same animation, and as well as support for seeking to specific frames.[15] Google reports a 64% reduction in file size for images converted from animated GIFs to lossy WebP, and a 19% reduction when converted to lossless WebP.

WebP's lossy compression algorithm is based on the intra-frame coding of the VP8 video format[16] and the Resource Interchange File Format (RIFF) as a container format.[2] As such, it is a block-based transformation scheme with eight bits of color depth and a luminance-chrominance model with chroma subsampling by a ratio of 1:2 (YCbCr 4:2:0).[17] Without further content, the mandatory RIFF container has an overhead of only twenty bytes, though it can also hold additional metadata.[2] The side length of WebP images is limited to 16383 pixels.[5]

WebP is based on block prediction. Each block is predicted on the values from the three blocks above it and from one block to the left of it (block decoding is done in raster-scan order: left to right and top to bottom). There are four basic modes of block prediction: horizontal, vertical, DC (one color), and TrueMotion. Mispredicted data and non-predicted blocks are compressed in a 4×4 pixel sub-block with a discrete cosine transform or a Walsh–Hadamard transform. Both transforms are done with fixed-point arithmetic to avoid rounding errors. The output is compressed with entropy encoding.[17] WebP also has explicit support for parallel decoding.[17]

The reference implementation consists of converter software in the form of a command-line program for Linux (cwebp) and a programming library for the decoding, the same as for WebM. The open source community quickly managed to port the converter to other platforms, such as Windows.[18]

Amongst web browsers, Google Chrome, Opera and Pale Moon natively support WebP while Mozilla has announced plans to implement WebP natively in Firefox.[19][20][21][22] All WebM-compatible browsers can also display WebP via a JavaScript shim.[23][24] WebP can also be displayed in all major browsers using the WebPJS JavaScript library, although support in Internet Explorer 6 and above is achieved using Flash.[25]

Amongst graphics software, Picasa (from version 3.9),[26] PhotoLine,[27] Pixelmator,[28] ImageMagick,[29] XnView,[30] IrfanView,[31] GDAL [32] and Aseprite[33] all natively support WebP. Telegraphics has released a free plug-in that enables WebP support in Adobe Photoshop.[34] The plugin was last updated in 2013 so it saves using an older revision of the WebP format. A more current beta Photoshop plugin has also been released by fnordware.[35] GIMP[36] and Paint.NET[37] support WebP via plugins. Google has also released a plug-in for Microsoft Windows that enables WebP support in Windows Photo Viewer, Microsoft Office 2010, FastPictureViewer,[38] and any other application that uses Windows Imaging Component.[39]

Telegram Messenger uses WebP for their Stickers, claiming they are displayed 5 times faster compared to the other formats usually used in messaging apps.[42]

Like VP8 on which it is based, former lossy WebP only supports 8-bit YUV 4:2:0 format,[44] which may cause color loss on images with thin contrast elements (such as in pixel art and computer graphics) and ghosting in anaglyph. To overcome this restriction, new lossless WebP supports VP8L encoding that works exclusively with 8-bit ARGB color space.[45][46]

In September 2010, Fiona Glaser, a developer of the x264 encoder, wrote a very early critique of WebP.[16] Comparing different encodings (JPEG, x264, and WebP) of a reference image, she stated that the quality of the WebP-encoded result was the worst of the three, mostly because of blurriness on the image. Her main remark was that "libvpx, a much more powerful encoder than ffmpeg's jpeg encoder, loses because it tries too hard to optimize for PSNR" (peak signal-to-noise ratio), arguing instead that "good psycho-visual optimizations are more important than anything else for compression."[16]

Pascal Massimino, developer of the cwebp encoder, reports improvements to the WebP encoder with a number of defects resolved since the preview releases. As WebP (and the WebM standard upon which it is based) is an open-source format[47] under active development, issues can be expected to both resolve and regress as they are addressed on an ad-hoc basis.

In October 2013, Josh Aas from Mozilla Research published a comprehensive study of current lossy encoding techniques[48] and was not able to conclude WebP outperformed JPEG by any significant margin.[49]