The CELP algorithm is based on four main ideas:

The original algorithm as simulated in 1983 by Schroeder and Atal required 150 seconds to encode 1 second of speech when run on a Cray-1 supercomputer. Since then, more efficient ways of implementing the codebooks and improvements in computing capabilities have made it possible to run the algorithm in embedded devices, such as mobile phones. 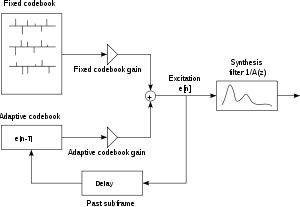 Before exploring the complex encoding process of CELP we introduce the decoder here. Figure 1 describes a generic CELP decoder. The excitation is produced by summing the contributions from an adaptive (aka pitch) codebook and a stochastic (aka innovation or fixed) codebook:

is the adaptive (pitch) codebook contribution and

is the stochastic (innovation or fixed) codebook contribution. The fixed codebook is a vector quantization dictionary that is (implicitly or explicitly) hard-coded into the codec. This codebook can be algebraic (ACELP) or be stored explicitly (e.g. Speex). The entries in the adaptive codebook consist of delayed versions of the excitation. This makes it possible to efficiently code periodic signals, such as voiced sounds.

is called the prediction filter and is obtained using linear prediction (Levinson–Durbin algorithm). An all-pole filter is used because it is a good representation of the human vocal tract and because it is easy to compute.

The main principle behind CELP is called Analysis-by-Synthesis (AbS) and means that the encoding (analysis) is performed by perceptually optimizing the decoded (synthesis) signal in a closed loop. In theory, the best CELP stream would be produced by trying all possible bit combinations and selecting the one that produces the best-sounding decoded signal. This is obviously not possible in practice for two reasons: the required complexity is beyond any currently available hardware and the “best sounding” selection criterion implies a human listener.

Most (if not all) modern audio codecs attempt to shape the coding noise so that it appears mostly in the frequency regions where the ear cannot detect it. For example, the ear is more tolerant to noise in parts of the spectrum that are louder and vice versa. That's why instead of minimizing the simple quadratic error, CELP minimizes the error for the perceptually weighted domain. The weighting filter W(z) is typically derived from the LPC filter by the use of bandwidth expansion: