For the lunar crater, see Al-Biruni (crater). For the university, see Al-Beroni University.

Al-Biruni is regarded as one of the greatest scholars of the medieval Islamic era and was well versed in physics, mathematics, astronomy, and natural sciences, and also distinguished himself as a historian, chronologist and linguist.[9] He was conversant in Khwarezmian, Persian, Arabic, Sanskrit, and also knew Greek, Hebrew and Syriac. He spent a large part of his life in Ghazni in modern-day Afghanistan, capital of the Ghaznavid dynasty which was based in what is now central-eastern Afghanistan. In 1017 he traveled to the Indian subcontinent and authored Tarikh Al-Hind (History of India) after exploring the Hindu faith practised in India.[lower-alpha 1] He was given the title "founder of Indology". He was an impartial writer on customs and creeds of various nations, and was given the title al-Ustadh ("The Master") for his remarkable description of early 11th-century India.[9] He also made contributions to Earth sciences, and is regarded as the "father of geodesy" for his important contributions to that field, along with his significant contributions to geography.

He was born in the outer district of Kath, the capital of the Afrighid dynasty of Khwarezm (now in Uzbekistan)[12] (or Chorasmia).[13] The word Biruni means "from the outer-district" in Persian, and so this became his nisba: "al-Bīrūnī" = "the Birunian".[13] He spent the first twenty-five years of his life in Khwarezm where he studied Islamic jurisprudence, theology, grammar, mathematics, astronomy, medics and other sciences.[13] The Iranian Khwarezmian language, which was the language of Biruni,[14][15] survived for several centuries after Islam until the Turkification of the region, and so must some at least of the culture and lore of ancient Khwarezm, for it is hard to see the commanding figure of Biruni, a repository of so much knowledge, appearing in a cultural vacuum.[16] He was sympathetic to the Afrighids, who were overthrown by the rival dynasty of Ma'munids in 995. He left his homeland for Bukhara, then under the Samanid ruler Mansur II the son of Nuh. There he corresponded with Avicenna[17] and there are extant exchanges of views between these two scholars.

In 998, he went to the court of the Ziyarid amir of Tabaristan, Shams al-Mo'ali Abol-hasan Ghaboos ibn Wushmgir. There he wrote his first important work, al-Athar al-Baqqiya 'an al-Qorun al-Khaliyya (literally: "The remaining traces of past centuries" and translated as "Chronology of ancient nations" or "Vestiges of the Past") on historical and scientific chronology, probably around 1000 A.D., though he later made some amendments to the book. He also visited the court of the Bavandid ruler Al-Marzuban. Accepting the definite demise of the Afrighids at the hands of the Ma'munids, he made peace with the latter who then ruled Khwarezm. Their court at Gorganj (also in Khwarezm) was gaining fame for its gathering of brilliant scientists.

In 1017, Mahmud of Ghazni took Rey. Most scholars, including al-Biruni, were taken to Ghazni, the capital of the Ghaznavid dynasty.[1] Biruni was made court astrologer[18] and accompanied Mahmud on his invasions into India, living there for a few years. Biruni became acquainted with all things related to India. He may even have learned some Sanskrit.[19] During this time he wrote the Kitab ta'rikh al-Hind, finishing it around 1030.[20]

An illustration from al-Biruni's astronomical works, explains the different phases of the moon. 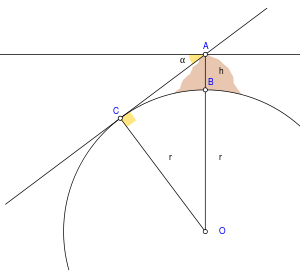 Ninety-five of 146 books known to have been written by Bīrūnī were devoted to astronomy, mathematics, and related subjects like mathematical geography.[21] Biruni's major work on astrology[22] is primarily an astronomical and mathematical text, only the last chapter concerns astrological prognostication. His endorsement of astrology is limited, in so far as he condemns horary astrology[23] as 'sorcery'.

In discussing speculation by other Muslim writers on the possible motion of the Earth, Biruni acknowledged that he could neither prove nor disprove it, but commented favourably on the idea that the Earth rotates.[24] He wrote an extensive commentary on Indian astronomy in the Kitab ta'rikh al-Hind, in which he claims to have resolved the matter of Earth's rotation in a work on astronomy that is no longer extant, his Miftah-ilm-alhai'a (Key to Astronomy):

[T]he rotation of the earth does in no way impair the value of astronomy, as all appearances of an astronomic character can quite as well be explained according to this theory as to the other. There are, however, other reasons which make it impossible. This question is most difficult to solve. The most prominent of both modern and ancient astronomers have deeply studied the question of the moving of the earth, and tried to refute it. We, too, have composed a book on the subject called Miftah-ilm-alhai'a (Key to Astronomy), in which we think we have surpassed our predecessors, if not in the words, at all events in the matter.[25]

In his description of Sijzi's astrolabe he hints at contemporary debates over the movement of the earth. He carried on a lengthy correspondence and sometimes heated debate with Ibn Sina, in which Biruni repeatedly attacks Aristotle's celestial physics: he argues by simple experiment that vacuum must exist;[26] he is "amazed" by the weakness of Aristotle's argument against elliptical orbits on the basis that they would create vacuum;[27] he attacks the immutability of the celestial spheres;[28] and so on.

In his major extant astronomical work, the Mas'ud Canon, Biruni utilizes his observational data to disprove Ptolemy's immobile solar apogee.[29] More recently, Biruni's eclipse data was used by Dunthorne in 1749 to help determine the acceleration of the moon[30] and his observational data has entered the larger astronomical historical record and is still used today[31] in geophysics and astronomy.

Al-Biruni contributed to the introduction of the experimental scientific method to mechanics, unified statics and dynamics into the science of mechanics, and combined the fields of hydrostatics with dynamics to create hydrodynamics. 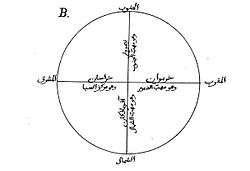 Bīrūnī also devised his own method of determining the radius of the earth by means of the observation of the height of a mountain and carried it out at Nandana in Pind Dadan Khan (present-day Pakistan).[32]

Biruni's most important work was a major pharmacopoeia, the "Kitab al-saydala fi al-tibb" (Book on the Pharmacopoeia of Medicine), describing essentially all the medicines known in his time. It lists synonyms for drug names in Syriac, Persian, Greek, Baluchi, Afghan, Kurdi, and some Indian languages.[33][34]

Due to an apparatus he constructed himself, he succeeded in determining the specific gravity of a certain number of metals and minerals with remarkable precision.[35]

Biruni's main essay on political history, Kitāb al-musāmara fī aḵbār Ḵᵛārazm (Book of nightly conversation concerning the affairs of Ḵᵛārazm) is now known only from quotations in Bayhaqī’s Tārīkh-e masʿūdī. In addition to this various discussions of historical events and methodology are found in connection with the lists of kings in his al-Āthār al-bāqiya and in the Qānūn as well as elsewhere in the Āthār, in India, and scattered throughout his other works.[36]

Bīrūnī is one of the most important Muslim authorities on the history of religion.[37] Al-Biruni was a pioneer in the study of comparative religion. He studied Zoroastrianism, Judaism, Hinduism, Christianity, Buddhism, Islam, and other religions. He treated religions objectively, striving to understand them on their own terms rather than trying to prove them wrong. His underlying concept was that all cultures are at least distant relatives of all other cultures because they are all human constructs. "What al-Biruni seems to be arguing is that there is a common human element in every culture that makes all cultures distant relatives, however foreign they might seem to one another."[38]

Al-Biruni divides Hindus into an educated and an uneducated class. He describes the educated as monotheistic, believing that God is one, eternal, and omnipotent and eschewing all forms of idol worship. He recognizes that uneducated Hindus worshipped a multiplicity of idols yet points out that even some Muslims (such as the Jabiriyya) have adopted anthropomorphic concepts of God.[39]

Bīrūnī’s fame as an Indologist rests primarily on two texts.[40] Al-Biruni wrote an encyclopedic work on India called “Tarikh Al-Hind” (History of India) in which he explored nearly every aspect of Indian life, including religion, history, geography, geology, science, and mathematics. He explores religion within a rich cultural context. He expresses his objective with simple eloquence:

I shall not produce the arguments of our antagonists in order to refute such of them, as I believe to be in the wrong. My book is nothing but a simple historic record of facts. I shall place before the reader the theories of the Hindus exactly as they are, and I shall mention in connection with them similar theories of the Greeks in order to show the relationship existing between them.(1910, Vol. 1, p. 7;1958, p. 5)

An example of Al-Biruni’s analysis is his summary of why many Hindus hate Muslims. He explains that Hinduism and Islam are totally different from each other. Moreover, Hindus in 11th century India had suffered through waves of destructive attacks on many of its cities, and Islamic armies had taken numerous Hindu slaves to Persia which, claimed Al-Biruni, contributed to Hindus becoming suspicious of all foreigners, not just Muslims. Hindus considered Muslims violent and impure, and did not want to share anything with them. Over time, Al-Biruni won the welcome of Hindu scholars. Al-Biruni collected books and studied with these Hindu scholars to become fluent in Sanskrit, discover and translate into Arabic the mathematics, science, medicine, astronomy and other fields of arts as practiced in 11th century India. He was inspired by the arguments offered by Indian scholars who believed earth must be globular in shape, which is the only way to fully explain the difference in daylight hours by latitude, seasons and earth's relative positions with moon and stars.[41] At the same time, Al-Biruni was also critical of Indian scribes who he believed carelessly corrupted Indian documents while making copies of older documents.[42] Al-Biruni's translations as well as his own original contributions reached Europe in 12th and 13th century, where they were actively sought.

The dispassionate account of Hinduism given by Al-Biruni was remarkable for its time. Mohammad Yasin compares it to "a magic island of quiet, impartial research in the midst of a world of clashing swords, burning towns, and plundered temples.”[43]

Most of the works of Al-Biruni are in Arabic although he wrote one of his masterpieces, the Kitab al-Tafhim apparently in both Persian and Arabic, showing his mastery over both languages.[44] Bīrūnī’s catalogue of his own literary production up to his 65th lunar/63rd solar year (the end of 427/1036) lists 103 titles divided into 12 categories: astronomy, mathematical geography, mathematics, astrological aspects and transits, astronomical instruments, chronology, comets, an untitled category, astrology, anecdotes, religion, and books of which he no longer possesses copies.[45] His extant works include:

Biruni wrote most of his works in Arabic, as the scientific language of his age, however, his Persian version of the Al-Tafhim[44] is one of the most important of the early works of science in the Persian language, and is a rich source for Persian prose and lexicography.[44] The book covers the Quadrivium in a detailed and skilled fashion.[44] 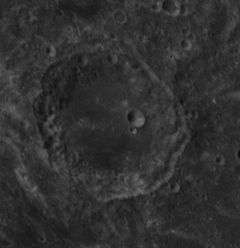 Lunar crater Al-Biruni, on the far side of the Moon, as seen by Apollo 14

The lunar crater Al-Biruni and the asteroid 9936 Al-Biruni were named in his honour.

In June 2009 Iran donated a scholar pavilion to United Nations Office in Vienna which is placed in the central Memorial Plaza of the Vienna International Center.[46] The Persian Scholars Pavilion at United Nations in Vienna, Austria is featuring the statues of four prominent Iranian figures. Highlighting the Iranian architectural features, the pavilion is adorned with Persian art forms and includes the statues of renowned Iranian scientists Avicenna, Abu Rayhan Biruni, Zakariya Razi (Rhazes) and Omar Khayyam.[47][48] 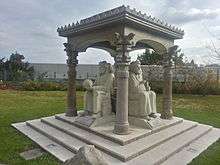 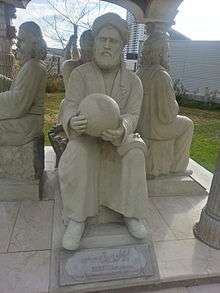