Acacia Fraternity (Ακακία) is a social fraternity founded at the University of Michigan at Ann Arbor in Ann Arbor, Michigan. The fraternity has 28 active chapters and 4 colonies throughout Canada and the United States. Membership was originally restricted to those who had taken the Masonic obligations, but in 1933 the International Conclave elected to dispense with the Masonic prerequisite. In 1988, at the 45th Conclave, the fraternity elected to use "International" rather than "National" when referring to the fraternity. 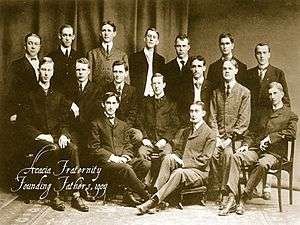 The founding members of the Acacia fraternity

Acacia Fraternity was founded on May 12, 1904, by a group of 14 Freemasons attending the University of Michigan at Ann Arbor. From the time of its founding members of other fraternities were eligible for membership in Acacia. However, the fraternity's rapid growth allowed it to stand on its own as a separate and co-equal fraternity, and in 1921 it dropped the provision that allowed men of other fraternities to join.

During the first two decades of the 20th century, Acacia was evolving from its roots as a successful Masonic club into the more standardized model of the other collegiate fraternities of the day. While maintaining its history and the symbolism derived from the Masonic fraternity, because of what Baird's cites (pIII-1) as a decline in the number of student Masons in undergraduate schools, Acacia opted in 1931 to relax the requirement that members must be Masons, removing the provision entirely in 1933.[2][3]

Early chapters were named alphabetically using Hebrew letters; these first 26 chapters at their option continue to use their historical designations today, while younger chapters are named after the institution at which they are located.[2]

The fraternity officially became International in 1988 at the 45th Conclave after the addition of the University of Western Ontario Chapter and the petition of the Carleton University Chapter.[2][3]

The founders of Acacia fraternity were:

Acacia is the only general fraternity to be founded at Michigan.[2]

The Sprig of Acacia is one of many Acacia symbols with roots in the Masonic Brotherhood. The Sprig of Acacia, symbolically, is a symbol of immortality among Masons, giving assurance that death is not the end. It is used by that organization during or after a funeral service, to honor a brother who has died. According to tradition, the symbol also reminds participants of the obligation that Masons must provide for the widow and children of their fallen brother. The Acacia fraternity has adopted this and other Masonic symbols, retaining them in linkage to its heritage.[3]

The Acacia flag was adopted in 1950. It consists of a vertical triband of gold-black-gold with the fraternity coat of arms on the center (or on a fess cotised sable three right triangles of the field) and the name in gold Old English lettering in an arc at the top.[3][4]

The main symbol and representation of Acacia occurs within a 3-4-5 (base-altitude-hypotenuse) right triangle of the first quadrant. This triangle holds very special significance to the fraternity and its members, symbolizing the imperfect nature of man as well as the struggle to approach an ideal, which symbolically is occasionally represented as a circle. Unless specified otherwise, whenever a triangle is mentioned in this article, a 3-4-5 right triangle of the first quadrant is what is meant.[3]

The present Acacia badge is a right triangle of the first quadrant whose sides are of the proportions 3, 4, 5, with the shortest side being the base. The sides are set with twelve pearls—three on the base, four on the altitude, and five on the hypotenuse. The corners are set with garnets. Within the triangle are three small right triangles of the same proportion, outlined in gold on a black enamel background. The badge of Acacia as it appears today was adopted at the second Grand Council of Acacia, which was held on December 6, 1913.[2][3]

The crest of Acacia depicts a three taper candelabrum surrounded by a wreath of Acacia. Below a shield of old gold, on fess cottised sable three 3-4-5 right triangles. Below the shield is a blue ribbon holding the motto of the fraternity in Greek: ΩΦΕΛΟΥΝΤΕΣ ΑΝΘΡΩΠΟΥΣ ("Human Service" or "In Service of Humanity").[3]

The Acacia Fraternity Foundation (AFF)[5] founded in 1989, is Acacia Fraternity's non-profit educational foundation. A 501(c)(3) tax-exempt organization, the AFF exists to provide scholarships to student Acacians and to support the worthy educational and leadership activities of the fraternity.[3]

The leadership of each chapter of Acacia is composed of at least five major officers: the Venerable Dean, Senior Dean, Junior Dean, Treasurer, and Secretary. Most chapters also include in some capacity a Director of Service and Philanthropy, Director(s) of Recruitment, and Risk Manager. The Venerable Dean is often referred to out of the house as the president of the chapter and performs such duties as running meetings and overseeing general house operations. The Senior Dean acts as the vice president of the chapter, stepping in for the Venerable Dean in his absence. In most cases, the Senior Dean is also the pledge educator. The Junior Dean is in charge of all socials including brotherhood events, formals, and mixers. The other two officers perform such functions as are normal for their positions. Some chapters assign additional responsibilities to various officers, so there may be slight variations from chapter to chapter.[2]

In even-numbered years, the Acacia Fraternity hosts the biennial Conclave, forming the legislative body of the fraternity. Each chapter in good standing is allowed two votes (usually the Venerable Dean and Chapter Advisor). In odd-numbered years, Acacia's Indiana Chapter hosts the Acacia Leadership Academy (ALA).[3]