Chi Omega (ΧΩ) is a women's fraternity and the largest member of the National Panhellenic Conference. Chi Omega has over 180 active collegiate chapters and over 240 alumnae chapters. Chi Omega's national headquarters is located in Memphis, Tennessee.[3]

Chi Omega was founded April 5, 1895 at the University of Arkansas by Ina May Boles, Jean Vincenheller, Jobelle Holcombe, and Alice Simonds, with the help of Dr. Charles Richardson (an initiate of the Kappa Sigma Fraternity). It first expanded in Fall 1898 with Chi chapter at Jessamine College; located in Nicholasville, Kentucky and Hellmuth Ladies' College, located in London, Ontario.[4] Both chapters were transferred to other schools in 1903.[5] By its 10th anniversary, in 1905, and with the support of Alumnae and Dr. Richardson, Chi Omega had installed 17 chapters throughout the United States.

From 1947-1973, Chi Omega's headquarters were in the private home of two alumnae in Cincinnati, Ohio. In 1973, Chi Omega moved to the 33rd floor of Carew Tower, the tallest building in Cincinnati. Chi Omega was the first women's Fraternity to have an Executive Office in an Office Building. In 1986, the Chi Omega Executive Office was moved to the 31st floor of the same office building, Carew Tower, until their move to the present location in Memphis, Tennessee in December 1993. 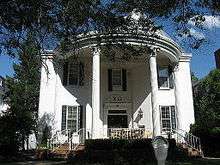 Chi Omega Fraternity members have supported philanthropy since the fraternity's inception in 1895. In the late 1990s, the leadership in Chi Omega researched opportunities for a partnership with a national philanthropy. The Make-A-Wish Foundation has been chosen as Chi Omega's official philanthropy since 2002.[7] Since the start of this alliance, Chi Omega has raised more than 14 million dollars and has volunteered over half a million hours for Make-A-Wish, being a sponsor of more than a million dollars annually.[8]

Despite being a women's organisation, Chi Omega only refers to itself as a women's fraternity instead of a sorority.[9] As such, Chi Omega is the largest women's fraternal organization in the world with over 330,000 initiates and 180 collegiate chapters.[3] The 300,000th member was initiated in 2013.

Chi Omega is an inter-generational women's organization committed to the ideals of pursuing friendship, personal integrity, service to others, academic excellence and intellectual pursuits, community and campus involvement and personal and career development.[1]

The ethos of the fraternity is embodied in a document known as the Chi Omega Symphony, composed in 1904 by Ethel Switzer Howard of the Xi Chapter at Northwestern University.[9]

Chi Omega's crest was adopted in 1902. Centered on the crest is a white carnation, with the Chi to the left and the Omega to the right of the flower. Above these symbols are both the skull and crossbones and the owl mascot. Beneath the carnation are the five letters, Rho, Beta, Upsilon, Eta and Sigma. The symbol is surrounded by a laurel wreath.[10]

The badge of Chi Omega was regulated and adopted in 1906, allowing only fourteen pearls or diamonds, no other stones to be used. It is a monogram of the Greek letter "Chi" superimposed over "Omega." That badge is to be worn only when wearing professional clothing, above all other pins and over the heart.[11]

Both badge and crest may only be used or worn by initiated members.

The fraternity's day-to-day business activities are overseen by the Governing Council; which consists of five elected alumnae, volunteer members, who are elected every two years.[12] Each chapter of Chi Omega receives at least an annual visit from a National Consultant who aids in the development of the members.

Since 1899, The Eleusis is the official newsletter magazine of Chi Omega, named after the Greek myth.[10] It was in 1899 edited by Ida Pace Purdue and delivered to less than 100 members. The subscription price was $1/year. An account of the founding, histories and pictures of the chapters, and a directory of the members were all included in the first issue. In 2013, over 200,000 copies of The Eleusis were mailed out three times per year to collegiate and alumnae members.[13]

The Nancy Walton Laurie Leadership Institute of Chi Omega is a leadership training program for collegiate and alumnae members. It strives to promote personal growth by exploring empowerment. Their goal is to create professionals who will pass on what they have learned to others whether it is on campus and/or in the community. The sessions include a variety of topics based on personal development. Training is available multiple ways including at national meetings and Flagship weekend at the Executive Headquarters. The Chi Omega Foundation supports the Laurie Leadership Institute.[14]

In 2014, a member at the University of Alabama was kicked out of the sorority after releasing a racially offensive picture that included a racial slur on social media.[15] The university's president and fraternity's leadership both released statements condemning the photo and acknowledging the importance of embracing diversity.[16]

In 2013, the chapter at Pennsylvania State University was shut down after the sorority threw an offensive party insulting Mexican-American culture. National leadership of the sorority stated the offensive party was not congruent with Chi Omega's values and purpose.[17]