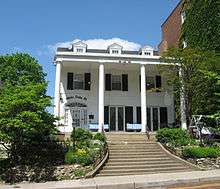 University of Illinois chapter house, listed in the NRHP

Alpha Delta Pi (ΑΔΠ) is a National Panhellenic sorority founded on May 15, 1851 at Wesleyan College in Macon, Georgia.[1] Alpha Delta Pi is known for being the first secret society for college women at Wesleyan Female College.

Alpha Delta Pi, nicknamed ADPi, was founded as the first girl's sorority on May 15, 1851 at Wesleyan Female College in Macon, Georgia. It was first named the Adelphean Society, a secret society focused on fellowship and scholarship for girls. Alpha Delta Pi was the first secret society for women. The sorority was founded on the principles of scholarship, leadership, service to others, and sisterhood. These principles still guide the policies and programs of the sorority today.

The open motto of ADPi is "We Live for Each Other," and its colors are azure blue and white. The official flower is the woodland violet; however, since woodland violets are found in the wild and not available for purchase, people often substitute the African violet. The mascot for Alpha Delta Pi is a lion with the nickname of Alphie and the official symbol is the diamond.[2] Alpha Delta Pi currently has 155 chapters in the United States and Canada, with the majority concentrated in the southern United States, and over 140 alumnae associations. Their Executive Office is located in Atlanta, Georgia. Its national philanthropy is the Ronald McDonald House Charities.

Wesleyan College, the first college for women in the world, was chartered to grant degrees to women. Young women fortunate enough to receive a college education were from progressive and educated families. A typical day for a Wesleyan student was highly regulated. There was a precise schedule for waking, eating, attending classes, taking fresh air and exercising, studying, attending chapel and sleeping. They had few personal liberties and little time for free thinking and socializing.

Alpha Delta Pi is a member of the National Panhellenic Conference, which is the governing council of the 26 member sororities.

The symbols of Alpha Delta Pi are:

The Adelphean Society was founded on May 15, 1851 by Eugenia Tucker Fitzgerald. The society was founded for the purpose of mental, moral, and social and domestic improvement. In 1904, a committee of three, led by Jewel Davis, conferred with Attorney Dupont Guerry, the President of Wesleyan, about to the procedure to become a national organization. They secured a charter of incorporation from the state of Georgia. In 1905, the Adelphean Society changed its name to Alpha Delta Phi. At the time of nationalization, Alpha Delta Phi had 60 active members and 3,000 alumnae.

In 1905, Beta Chapter was established at Salem College in Winston-Salem, North Carolina by two members of Alpha Chapter. The chapter has seven members and fifteen new initiates. It thrived for three years until the administration abolished sororities. In 1906, the Gamma Chapter was founded at Mary Baldwin Seminary. Visitors were not allowed at the school, so the chapter charter and special instructions were delivered to the new group by mail. In 1906, Jewel Davis entered The University of Texas at Austin as a graduate student, organized a group, and installed them as Delta Chapter, the fourth chapter of Alpha Delta Phi. Jewel Davis is listed as a charter member as there was no precedent for affiliation. Today, the Delta Chapter at The University of Texas at Austin is the oldest surviving chapter of Alpha Delta Pi. Between 1906 and 1912, eight more chapters were founded at various universities.

In 1913, Alpha Delta Phi officially changed its name to Alpha Delta Pi. The Convention body changed the name of the organization, adopted a recognition pin, and appointed a standardization committee. [3]The trustees at Wesleyan Female College voted to abolish sororities.[4] Chi Chapter, at Wittenberg University was the first chapter to bear the new name. In 1948, Mrs. Carolee Strock Stanard retired as Grand President and part of her keynote address became The Creed of Alpha Delta Pi. In 1960, Alpha Delta Pi's 100th chapter, Delta Omicron, was installed at East Carolina University. In 1971, the Zeta Gamma Chapter was adopted as the first sorority at the University of North Carolina Charlotte's campus.

The first mascot was a griffin.

In 1979, Alpha Delta Pi adopted Ronald McDonald Houses as the National Philanthropy. In 1983, Alpha Delta Pi Foundation was established. In 2001, Alpha Delta Pi celebrated its 150th Anniversary in Atlanta, Georgia, and in 2006, the Delta chapter, the oldest open chapter of ADPi, celebrated its 100th anniversary at The University of Texas at Austin. In 2009, Theta Theta Chapter at Quinnipiac University in Hamden, Connecticut was installed. Theta Theta was the 200th chapter of ADPi to be installed. Chapters continue to be installed and anniversaries celebrated at numerous university campuses. In 2014, the Delta Sigma Chapter was reinstalled at The University of Mississippi.

The Adelphean of Alpha Delta Pi

A member of the Delta Delta chapter of Alpha Delta Pi Sorority started a partnership with the Ronald McDonald House Charities (RMHC) in 1979. RMHC mission is to create, find, and support programs that directly improve the health and well-being of children. The partnership between ADPI and RMHC has contributed more than $7.8 million to the organization of the Ronald McDonald House. There are over 300 Ronald McDonald Houses in 52 countries that supporters, sisters, and alumni of Alpha Delta Pi help to serve. The goal of the houses is to provide comfort to families who have seriously ill children in nearby hospitals. Besides donating money to the Ronald McDonald Houses, members of the ADPi collegiate chapters volunteer their time and energy serving those staying at the facilities. Sisters of ADPi will cook meals for families, clean and repair the houses, and play and interact with children and adults living at the houses.