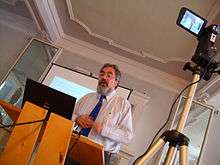 Anthony Thomas Grafton (born May 21, 1950) is one of the foremost historians of early modern Europe and the current Henry Putnam University Professor at Princeton University. He is also a corresponding fellow of the British Academy and a recipient of the Balzan Prize. From January 2011 to January 2012, he served as the President of the American Historical Association.[1]

Grafton was born in New Haven, Connecticut. He was educated at Phillips Academy (Andover).

After a brief period teaching at Cornell's history department, he was appointed to a position at Princeton University in 1975, where he has subsequently remained. Since January 2007, he has been a co-editor of the Journal of the History of Ideas.

Anthony Grafton is noted for his studies of the classical tradition from the Renaissance to the eighteenth century, and in the history of historical scholarship. His many books include a profound study of the scholarship and chronology of the foremost classical scholar of the late Renaissance, Joseph Scaliger (2 vols, 1983–1993), a revisionist account (with Lisa Jardine) of the significance of Renaissance education (From Humanism to the Humanities, 1986), and, more recently, studies of Girolamo Cardano as an astrologer (1999) and Leon Battista Alberti (2000). He is co-author of an article on the marginalia of Gabriel Harvey that is one of the founding pieces of scholarship in the new field of the history of reading.

The best introduction to his preoccupation with the relations between scholarship and science in the early modern period is perhaps (still) Defenders of the Text (1991), one of his several essay collections, the most recent of which is Worlds Made by Words. In some ways his most original and accessible book is The Footnote: A curious history (1997; published in German as Die Tragischen Ursprünge der deutschen Fußnote), a case study in what might be called the history of history, from below.

He also writes on a wide variety of topics for The New Republic, The American Scholar, and The New York Review of Books. He owns a bookwheel which he keeps at hand in his home.