James Henry Breasted (/ˈbrɛstɪd/; August 27, 1865 – December 2, 1935) was an American archaeologist, Egyptologist, and historian. After completing his PhD at the University of Berlin in 1894, he joined the faculty of the University of Chicago. In 1901 he became director of the Haskell Oriental Museum at the university, where he continued to concentrate on Egypt. In 1905 Breasted was promoted to professor, and was the first chair in Egyptology and Oriental History in the United States. In 1919 he became the founder of the Oriental Institute at the University of Chicago, a center for interdisciplinary study of ancient civilizations. Breasted was a committed field researcher, and had a productive interest in recording and interpreting ancient writings, especially from sources and structures that he feared may be lost forever.

James Henry Breasted was born on Aug. 27, 1865, the son of a small hardware business owner, in Rockford, Illinois.[1] He was educated at North Central College (then North-Western College), graduated in 1888, and attended Chicago Theological Seminary but transferred to Yale University to study Hebrew. He received a master's degree from Yale in 1891 and, on the advice of William Rainey Harper, went to University of Berlin, where he studied under the instruction of Adolf Erman. Erman had just established a new school of Egyptology, concentrating systematically on grammar and lexicography. Breasted received his doctorate in 1894. He was the first American citizen to obtain a PhD in Egyptology.

In 1894 Breasted married Frances Hart. Hart and her sisters were in Germany at the same time as Breasted, learning the German language and studying music.[1] The couple honeymooned in Egypt. It was a working vacation as Breasted had been recruited to build a collection of Egyptian antiquities for the University of Chicago.[2]

Hart died four decades later in 1934, after which Breasted married one of her sisters.[1] 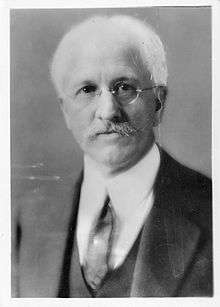 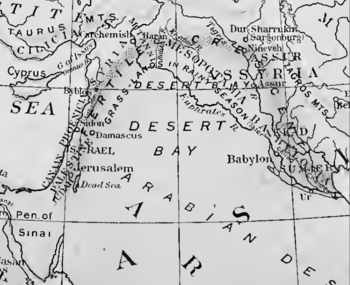 Breasted became an instructor at the University of Chicago in 1894 soon after earning his doctorate. Five years later the university agreed to his accepting an invitation from the Prussian Academy of Sciences to work on its Egyptian dictionary project. From 1899 to 1908 he did field work in Egypt, which established his reputation. He began to publish numerous articles and monographs, as well as his History of Egypt from the Earliest Times Down to the Persian Conquest in 1905. At that time he was promoted to Professor of Egyptology and Oriental History for Chicago (the first such chair in the United States).

In 1901 Breasted was appointed director of the Haskell Oriental Museum (forerunner of the Oriental Institute), which had opened at the University of Chicago in 1896. Though the museum contained works of art from both the Near East and the Far East, Breasted's principal interest was in Egypt, and he began to work on a compilation of all the extant hieroglyphic inscriptions, which was published in 1906 as Ancient Records of Egypt, and continues to be an important collection of translated texts; as Peter A. Piccione wrote in the preface to its 2001 reprint, it "still contains certain texts and inscriptions that have not been retranslated since that time."

Through the years, as Breasted built up the collection of the Haskell Oriental Museum, he dreamed of establishing a research institute, “a laboratory for the study of the rise and development of civilization” that would trace Western civilization to its roots in the ancient Middle East.[4] As World War I wound down, he sensed an opportunity. He wrote to John D. Rockefeller Jr., son of the major donor to the University, and proposed founding what would become the Oriental Institute. He planned a research trip through the Middle East, which he suggested was ready to receive scholars. Rockefeller responded by pledging $50,000 over five years for the Oriental Institute. He separately assured the University of Chicago President Judson to pledge another $50,000 to the cause. The University of Chicago contributed additional support and, in May 1919, the Oriental Institute was founded.

Breasted had two key objectives for the field trip: to purchase antiquities for the Oriental Institute and to select sites for future excavation. The group ultimately consisted of Breasted and four of his students (or former students): Ludlow Bull, William Edgerton (both graduate students in Egyptology); Daniel Luckenbill (professor of Assyriology at the University of Chicago), and William Shelton (a former student who was a professor of Semitic languages at Emory University).

The general itinerary of the expedition was:

As Breasted scouted future archaeological sites and visited antiquities dealers, he came to know many of the British political figures and scholars working in Egypt. These included Gertrude Bell, Howard Carter, Lord Carnarvon, Lord Allenby, and the Arab leader Faisal, who would become king of Iraq. Due to Breasted's extensive travels and knowledge of the political situation throughout the Middle East, Lord Allenby, at that time the High Commissioner for Egypt, requested that he inform the British Prime Minister and Earl Curzon about the hostility of the western Arabs to the occupying British forces before returning to America.[5]

Breasted's acquisitions were significant for the growth and scope of the collections of the Oriental Institute and the Art Institute of Chicago. One of his most well-known purchases was the mummy of Meresamun, a singer in the interior of the Temple of Amun at Karnak.

The first excavation of the Oriental Institute was in Egypt at Medinet Habu, one of the sites which he had recommended. Breasted returned to Egypt frequently; in 1922 and 1923 he aided Howard Carter in deciphering the seals from the recently discovered Tomb of Tutankhamun. [5] On April 25, 1923, Breasted became the first archaeologist to be elected to membership in the National Academy of Sciences. The honor helped to legitimize the struggling profession of archaeology in American academic circles. He served as the president of the History of Science Society in 1926.[6]

Breasted died in New York City on December 2, 1935 of a streptococcus infection after returning from his last expedition.[7][8]

"If one were asked to name a scholar who, above all others, stimulated the development of ancient historical studies in the United States during the earlier part of the twentieth century, that honor would have to fall to the colossal figure of James Henry Breasted."

While at Chicago, Breasted had a home built near the university. Its carriage house was designed to look like a mastaba. The house is now used as the fraternity house of Phi Gamma Delta.

Breasted is buried in Greenwood Cemetery, in Rockford, Illinois. His grave site is marked with a large Aswan granite cube, marked simply with his name and “historian and archaeologist.”[9]

The James Henry Breasted Prize was established in 1985 by the American Historical Association. It is awarded annually to a book in English that covers any period of history prior to 1000 AD.[10]

The Dawn of Conscience

Breasted's Dawn of Conscience (1933) was a major influence on Sigmund Freud, who completed his Moses and Monotheism in London in 1938.[11]

It has now become a sinister commonplace in the life of the post-war generation that man has never had any hesitation in applying his increasing mechanical power to the destruction of his own kind. The World War has now demonstrated the appalling possibilities of man's mechanical power of destruction. The only force that can successfully oppose it is the human conscience - something which the younger generation is accustomed to regard as a fixed group of outworn scruples. Everyone knows that man's amazing mechanical power is the product of a long evolution, but it is not commonly realized that this is also true of the social force which we call conscience - although with this important difference: as the oldest known implement-making creature man has been fashioning destructive weapons for possibly a million years, whereas conscience emerged as a social force less than five thousand years ago. One development has far outrun the other; because one is old, while the other has hardly begun and still has infinite possibilities before it. May we not consciously set our hands to the task of further developing this new-born conscience until it becomes a manifestation of good will, strong enough to throttle the surviving savage in us? That task should surely be far less difficult than the one our savage ancestors actually achieved: the creation of a conscience in a world where, in the beginning, none existed.
— James Henry Breasted, The Dawn of Conscience, (1933) Prologue[12]