Rajahmundry (officially: Rajamahendravaram) is one of the major cities in the Indian state of Andhra Pradesh. It is located on the banks of the Godavari River, in East Godavari district of the state. The city is the mandal headquarters to both Rajahmundry (rural) and Rajahmundry (urban) mandals. It is also the divisional headquarters of Rajahmundry revenue division and one of the two municipal corporations in the district, alongside Kakinada.[4] As of 2011 census, it is the sixth most populous city in the state, with a population of 341,831.[5]

In its earlier days, it was called Rajamahendravaram.[1] But later, it was referred as Rajahmundry. On 10 October 2015, the government made the official announcement to rename the city with its original name, Rajamahendravaram.[7] 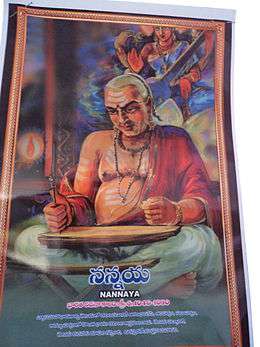 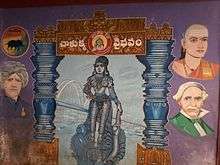 The city can be traced back to the rule of the Eastern Chalukya king Raja Raja Narendra who reigned around 1022 AD, after whom it is named – Rajamahendri or Rajamahendravaram. Remains of 11th century palaces and forts still exist. However, new archaeological evidence suggests that the town may have existed much before the Chalukyas.

Rajahmundry is acclaimed as the birthplace of the Telugu language — its grammar and script evolving from the pen of the city-born poet, Nannayya. Also known as 'Adi Kavi' (the first poet) of Telugu, Nannayya, along with Tikkana and Yerrana, translated the Sanskrit version of Mahabharata into Telugu. Kandukuri Veeresalingam — a social reformer and the author of Rajashekhara Charithra, the first Telugu novel — was also from Rajahmundry.

Rajahmundry was one of the biggest cities in South India in the 19th century. It was the hotbed of several movements during India's freedom struggle and acted as a base for many key leaders. When the Indian National Congress had its first meeting in Bombay (Mumbai), two leaders from Rajahmundry, Nyapathi Subba Rao and Kandukuri Veeresalingam participated in it. Subba Rao, founder of Hindu Samaj in Rajahmundry, was also one of the six founders of India's noted English daily, The Hindu.

The rebirth of culture in Andhra Pradesh started in Rajahmundry. Kandukuri Veeresalingam Pantulu is known as the father of reforms in Andhra Pradesh. He started a monthly magazine, Vivekavardhini, a school for girls at Dowleswaram in 1874. The first widow remarriage took place on 11 December 1881. A society with 16 members was started on 22 Jun 1884, which used to look after widow remarriages in Rajahmundry. The town hall in Rajahmundry was established in 1890 by Veeresalingam.

Annie Besant visited Rajahmundry twice. First, she came when the foundation of a branch of the Divya Gyan Samaj building at Alcot Gardens was being laid. She came again during the opening ceremony of the building.

Ramakrishna Mission was established in 1950–51 near Kambal tank. The place is now the Ayakar Bhavan (Income Tax Office).

Vande Mataram Movement was started in the year 1905 against the partition of Bengal. Bipin Chandra Paul visited Rajahmundry in April 1905 for the same. During his visits to Rajahmundry, he used to address the public in "Paul Chowk" (the present-day Kotipalli Bus Stand).

The area comprising the Old Godavari Railway Station, the statue of Mrityunjaya (Lord Siva), the statue of Potti Sriramulu and Hotel Ajanta is called Fort Gate. Today, the Fort Gate is not there, but a wall (only a part) covering the main street (through which elephants, horses etc. were taken for a bath) is found. This wall is slanted on both sides.

During the construction of the Havelock Bridge (named after the then Madras Governor) in 1900, one of the fort walls was demolished. The fort was constructed between the 8th and 11th centuries during the reign of the Chalukyas. Even today, we see the Kandakam Street (Kandakam – moat or a big canal dug around a fort and filled with water to stop the enemy entering – generally 20 feet (6.1 m) deep and 50 feet (15 m) wide).

The present municipal water works department (formerly Municipal High School) was famous as Ratnangi and Chitrangi palaces and was an underground escape route (Surangamu or way to escape when enemy forces attack the palace from all the sides).

The fort of the Dutch

The Rajahmundry traps, part of the Deccan Traps, are located on the Godavari river and are of particular interest to geologists.[10]

The weather is hot and humid, with a tropical climate and, thereby, no distinct seasons. The mean maximum temperature is 32 °C. The hottest season is from April to June, with temperature ranging from 34 °C to 48 °C with maximum of 51 °C recorded in May 2002 and May 2007. The coolest months are December and January, when it is pleasant at 27 °C to 30 °C. There is heavy monsoon rain at the end of summer, with depressions in the Bay of Bengal.

The Mayor of the corporation is Pantam Rajini Sesha Sai and the commissioner is Vijay Rama Raju.V.[17][18] 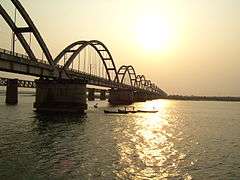 The bridge, built by the Hindustan Construction Company for the Indian Railways, was designed by Bureau BBR, Switzerland and checked by Leonard Andrea and Partners, Germany.[19][20] Construction on the bridge began in 1991 and lasted till 1997. It was commissioned for passenger traffic in March 1997 and became fully operational for running trains by the Indian Railways from 2003.[6]

The construction of the bridge commenced on 11 November 1897 and opened for traffic on 30 August 1900. The bridge was named after Sir Arthur Elibank Havelock, the then Governor of Madras. Frederick Thomas Granville Walton served as the Engineer-in-Chief, assisted by executive engineers R A Delanougerede, F D Couchman and J E Eaglesome.[21] It has 56 spans, each of 45.7 metres (150 ft) and is 2,754 metres (9,035 ft) long. Having served its full life span of 100 years, it was decommissioned in 1997, and Godavari Arch Bridge was built as a replacement.[6] 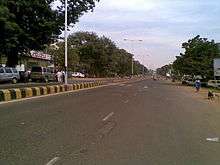 Rajahmundry is well connected to all parts of the state. NH-5 passes through Rajahmundry providing road connectivity to all major cities and towns. The city has a total road length of 472.28 km.[22] The Andhra Pradesh State Road Transport Corporation operates bus services from Rajahmundry bus station.[23] 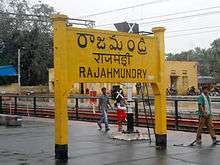 Rajahmundry is an A–category station in the Vijayawada railway division.[24] It is located on the Howrah-Chennai main line of South Central Railway zone.

National Waterway 4 was declared on 24 November 2008, which connects the Indian states of Telangana, Andhra Pradesh, Tamil Nadu, and the union territory of Puducherry. It passes through Kakinada, Eluru, Commanur, Buckingham Canal and also part of Krishna and Godavari rivers rivers.[25] It is being developed by Inland Waterways Authority of India, and is scheduled for completion in 2013.[26] 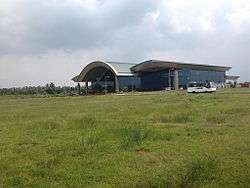 Rajahmundry Airport, situated near Madhurapudi 18 km away from the heart of the city. Jet Airways, Spicejet, and TruJet are major airliners. A new terminal building was inaugurated on 16 May 2012. Runway is being expanded from the 1,749 m to 3,000 m to facilitate the landing and takeoff of bigger aircraft.[27] 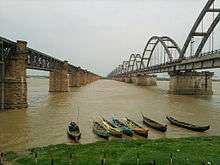 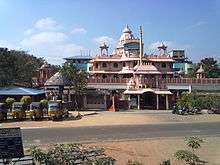 The river Godavari and its bridges, Sir Arthur Cotton museum etc. are some of the attractions in the city. Rajahmundry is a major Hindu pilgrimage sites, with a number of temples. It hosts holy congregations called Pushkaram held once every 12 years and considered auspicious to take sin-ridding holy dips—with the last in July 2015, when around 100 millions are said to have taken the bath. Krishna temple constructed by the ISKCON foundation on the banks of Godavari.[28] Popularly called as Gowthami Ghat, it is a major attraction for young people as a recreational centre.

Sir Arthur Cotton Museum in Dowleswaram (beside barrage) is the only museum for Civil engineering in the state. The Museum houses several rare photographs of Sir Arthur Cotton and of the construction of the dam. The tools used to construct the dam are still preserved here. The Dowleswaram Barrage is an irrigation structure which is built on the lower stretch of the Godavari River before it empties into the Bay of Bengal.

Rajahmundry is a commercial hub for east and west Godavari districts. It is a well-known destination for cloth and bullion business. Cloth market in the city is one of the largest markets in India with many co-operative handloom houses. Rajahmundry is home for many cloth merchants.

Rajahmundry is one of the largest bullion markets in India which consists hundreds of gold, silver and platinum shops throughout the city. Important business locations are the Mahatma Gandhi Wholesale Cloth Market (MGC) complex, Thadithota), Mainroad (Fortgate) Market and Devi Chowk.

Durga Cinetone was the first south Indian film studio, to be built in Rajahmundry in the year 1936 by Nidamarthi Surayya.[29]

Damerla Rama Rao Art Gallery of the city has various paintings such as, Krishna Leela, Godavari of Eastern Ghats and Milkmaids of Kathiawar etc.[30]

The city plays a major role in education for the rural students of the nearby villages.The primary and secondary school education is imparted by government, aided and private schools, under the School Education Department of the state.[31] As per the school information report for the academic year 2015–16, the city limits (including the merged villages) have more than 54,143 students enrolled in over 228 schools.[32][33]

The Government Arts College, in Rajahmundry was founded more than 150 years ago and is a NAAC accredited (A) Institution. The institutes founded by the great reformer Kandukuri Veeresalingam Panthulu have now grown into large colleges and organisations. SKR Women's college is famous for its campus and teaching facilities. The BEd Training Institute is one of the oldest in India. St. Ann's (EM) School, APPM Model High School, Bala Vigjana Mandir (B.V.M.), Sri Satya Sai Gurukulam, etc. being among the better known schools.

Adikavi Nannaya University is established in March 2006 through the Government of Andhra Pradesh Act No. 28 of 2006 at Rajahmundry. Named after an 11th-century poet Nannayabhatta, who is revered as Adikavi (the first poet) of Telugu literature. Other major universities in the city include Sri Potti Sri Ramulu Telugu University, Acharya NG Ranga Agricultural University, Dr. B.R. Ambedkar Open University Study Center (govt. college).

Godavari Institute of Engineering and Technology was established in 1998 to offer engineering education of world-class standards. BVC Educational Society which was registered on 8 July 1992 under the district registrar, East Godavari District, Andhra Pradesh. GSL Medical College Rajahmundry Established in 2002 under the aegis of GSL Educational Society, GSL Medical College is one of the top private medical institutions in India. There is also a Godavari Chapter of Institute of Cost and Works Accountants of India for those aspiring to have cost and works accountancy as their profession, which provides regular coaching for the ICWA courses since 1993.