pronunciation ), also known as Masulipatnam and Bandar, is a city in Krishna district of the Indian state of Andhra Pradesh. It is a municipal corporation and the administrative headquarters of the Krishna district.[3] It is also the mandal headquarters of Machilipatnam mandal in Machilipatnam revenue division of the district.[4][5] The ancient port town served as the settlement of European traders from 14th century and it was a major trading port for the British, Dutch and French in the seventeenth century.[6]

During seventeenth century, it was known with the name Masulipatnam, Masula and also Bandar (translates to port).[7][8][9] The port town in the ancient times was also referred with the name Maesolia.[10] 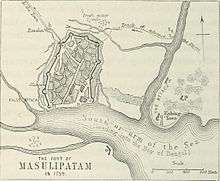 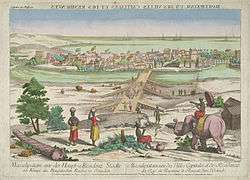 View of Masulipatnam in 1676

The town has existed since the 3rd century BCE (Satavahana period) when, according to Ptolemy, it was known as Maisolos. The Periplus of the Erythraean Sea calls it Masalia in the 1st century BCE.[11] The port is located on the southeastern, or Coromandel Coast, of India. Situated in the mouth of the River Krishna on the Bay of Bengal, the Masula port saw flourishing sea trade. Muslin clothes were traded by ancient Greeks from the town and the word muslin originated from the name Maisolos.[12] Muslin was an important source of income for the town, being a favourite of Roman traders for domestic consumption. Several Roman coins were found during excavations of Buddhist towns located near Machilipatnam.[13]

The town was the district headquarters of the then, Masulipatnam district and now to the Krishna district, which was formed in 1859 in the composite Madras state.[5]

Machilipatnam city gets most of its annual rainfall due to the southwest monsoon. It has a tropical savanna climate (Köppen climate classification Aw) with hot summers and moderate winters. The hottest months are between April and June. The average normal rainfall in the district is 959 millimetres (37.8 in).

Machilipatnam city is frequently hit by cyclones originating in the Bay of Bengal. The Andhra Pradesh coast between Ongole and Machilipatnam is vulnerable to high surges of the sea due to cyclones. The 1977 Andhra Pradesh cyclone crossed the coast near Nizampatnam and took approximately 10,000 lives. As the storm approached the coast, gale winds reaching 200 km/h lashed Prakasam, Guntur, Krishna, East Godavari and West Godavari districts. A storm surge, 5 metres high, inundated the Krishna estuary and the coast south of Machilipatnam city (Bandar)

On 8 December 2004, a high capacity S-Band Doppler cyclone warning radar was installed, commissioned and made operational at the city.[16] It was purchased from a German manufacturer, Gematronik. With the installation of the radar, the state will be better equipped to track cyclones by the onset of monsoon, according to an official from the State Met Office talking to the newspaper The Hindu. This facility will monitor the 960 km long coastline of the state.[17]

Machilipatnam Municipal Corporation is the civic body of the city. It was constituted as a municipality in the year 1866 and was upgraded to corporation from special grade municipality on 9 December 2015.[21][22] It covers an area of 26.67 km2 (10.30 sq mi) under its jurisdiction. The present commissioner of the corporation is A.S.N.V.Maruthi Diwakar and the municipal chair person is Motamarri Venkata Baba Prasad.[23]

Machilipatnam is known for its handloom industry, which produces Kalamkari textiles exported to United States and other Asian countries. The other notable industries are the boat building and fishing.[27] Machilipatnam was a trading base for the Europeans in the 17th century and known for minting copper coins, exporting diamonds, textiles etc., through the port.[28] The state government is taking certain measures to bring back the glory of the former port city. It has planned to set up Machilipatnam deep sea port and its associated industrial corridor under Machilipatnam Area Development Authority. This move is expected to generate employment to over 25,000 people.[29][27] 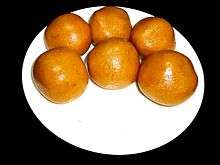 Machilipatnam Kalamkari is a handcrafted dyed block-painting of a fabric.[30] It is performed at the nearby town of Pedana and was registered as one of the geographical indication from Andhra Pradesh.[31] Machilipatnam and Srikalahasti style are the only two existing Kalamkari style of works present in India.[32]

The city is well known for a sweet known as Bandar Laddu.[33]

The city has many religions with their worship centres in and around the city such as, Panduranga Temple at Chilakalapudi, Agastheeswara Temple etc. Dattashram is a pilgrimage site on the coast and home to ancient Shiva and Datta temples. Manginapudi is popularly known as "Datta Rameswaram" due to the consecration of 12 wells for bathing (recalling those at Rameswaram).[34] 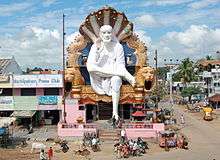 The Manginapudi Beach is located at the coast of the city.[35]

Machilipatnam port was damaged by a giant ocean wave on 1 November 1864.[28] Since, then there were many efforts to build a new port. Navayuga Engineering Company Limited is in the process of building a deep water port at Gilakaladinne of the city.[39] The nearest domestic airport is Vijayawada Airport.

The primary and secondary school education is imparted by government, aided and private schools of the School Education Department of the state.[40][41] The medium of instruction followed by different schools are English, Telugu.

Machilipatnam is an ancient and famous educational centre. The Noble College Machilipatnam is one of the first four colleges in India and the first college in Andhra Pradesh. There are two other colleges with histories related to India's fight for independence, namely The Hindu College and The National College (Andhra Jateeya Kalasala). Kendriya Vidyalaya is the only school maintained by Government of Indiain Machilipatnam which was established in 1994. Krishna University has been established in Machilipatnam as the Headquarters of Krishna District in 2008 for Higher education.