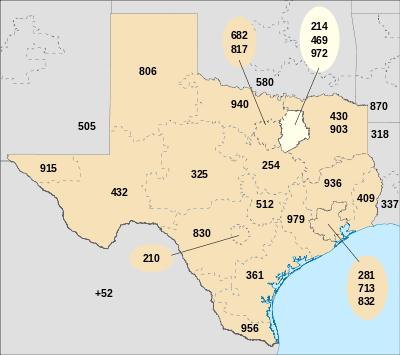 214, 469, and 972 are the North American telephone area codes for Dallas, Texas and most of the eastern portion of the Metroplex.

The 1990 split was intended as a long-term solution, but within five years 214 was close to exhaustion due to the rapid growth of the Metroplex as well as the popularity of cell phones, fax machines and pagers. Additionally, the entire Metroplex is a single LATA, so several numbers in 817 weren't available for use. To solve this problem, in 1995 all of the old 214 territory outside of the Dallas Central Business District was split off as area code 972. Within only two years, however, both 214 and 972 were on the verge of exhaustion. To solve the problem, area code 469 was introduced on July 1, 1999 as an overlay for most of the eastern portion of the Metroplex. At the same time, the 214-972 boundary was "erased," and 972 was converted into an additional overlay for the entire region. The result was three area codes overlaying the same area, with ten-digit dialing required for all calls.

Counties served by these area codes:

Towns and cities served by these area codes: