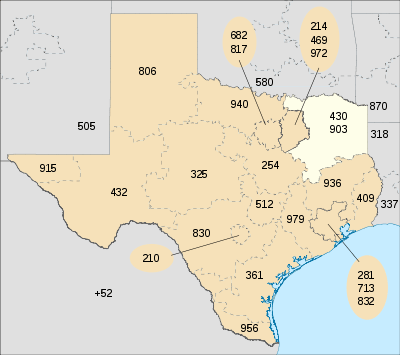 North American area codes 430 and 903 are state of Texas telephone area codes for numbers in the Northeast Texas area, including Texarkana, Tyler, and Sherman. Area code 903 was created November 4, 1990 as a split from area code 214. Area code 430 was created February 15, 2003, as an overlay for area code 903. The 903/430 overlay region begins just north and east of the Dallas–Fort Worth metroplex and extends to the Oklahoma, Arkansas, and Louisiana borders.

Counties Served by this area code:

Before its implementation in Texas in 1990, from 1962 until October 18, 1980, 903 was an actual area code for parts of northwestern Mexico served by Telefónica Fronteriza, which homed on AT&T lines in the United States rather than Telefonos de Mexico (Telmex). Telmex and the Mexican government forcibly acquired the TF exchanges, and in 1980, Telmex reorganized the area codes of the country, assigning 6 as the initial digit of 8-digit numbers in the northwest. At this point, 903 was withdrawn from use and replaced with 706 as one of two area codes used for alternative dialing into certain parts of Mexico from the United States. The other area code used for this was 905. While 903 was a genuine NANP area code, 706 and 905 were dial-around codes that replaced +52(5) for Mexico City and +52(6) for northwestern Mexico. 706 and 905 were withdrawn in February 1991 pending assignment within the NANP service area.