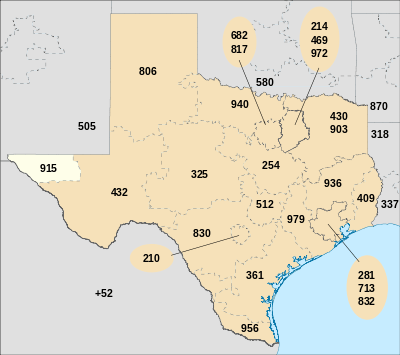 North American area code 915 is a state of Texas area code for telephone numbers in the El Paso area. It is one of the original area codes established in October 1947. Originally, it covered the north-western part of the state, north of Austin and west of Fort Worth, and stretched from the Oklahoma border to the Mexican border.

This once-vast area code was split three times, as follows:

Counties currently served by area code 915 are Culberson, El Paso, and Hudspeth. It is the only area code in Texas that is predominantly in the Mountain Time Zone.