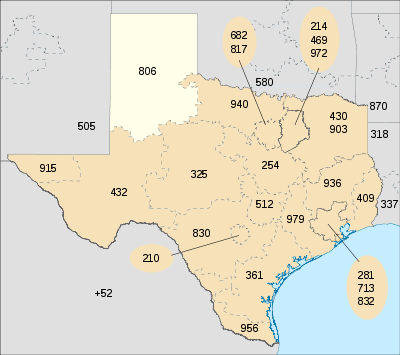 North American area code 806 is a state of Texas telephone area code for numbers in the Texas Panhandle and South Plains, including the cities of Amarillo and Lubbock. 806 was created as a flash-cut sometime during 1957, but available databases do not indicate from which area code it was split, as all original area codes were created in October 1947. Based on proximity, however, it was probably split from the 915 area code. In a message posted to the Telecom Digest mailing list and newsgroup comp.dcom.telecom, Carl Moore reports that this area code was created mostly in part from area code 915 as well as a small part from area code 817.