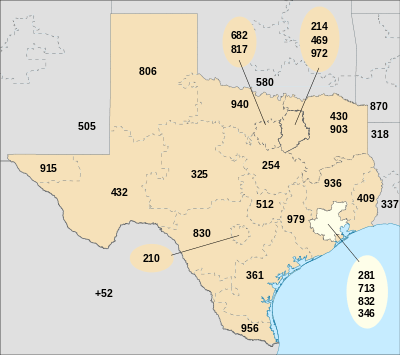 Area code 713, was one of the original area codes established with the North American Numbering Plan in October 1947. It originally covered the entire southeastern quadrant of Texas, from the Sabine River to the Brazos Valley.

On March 19, 1983, the area was divided for the first time. The immediate Houston area retained area code 713 while the northern, eastern and western portions of the old 713 territory became area code 409.

On November 2, 1996, area 713 was split again, with most of Houston's suburbs switching to area code 281. The dividing line roughly followed Beltway 8. Generally, Houston itself and most of the suburbs inside the beltway kept area code 713, while everything outside it became area 281. Area code 713 was retained by all cellphone customers in the Houston area.

This was intended as a long-term solution, but within two years both area codes 281 and 713 were close to exhaustion due to Houston's rapid growth and the proliferation of cell phones and pagers. On January 16, 1999, area code 832 was created as an overlay for the entire Houston area. At the same time, area code 281 was also turned into an overlay for the entire region, effectively erasing the 713–281 boundary. The result was three area codes covering the Houston metro area, with ten-digit dialing required for all calls.

On May 9, 2013, the Texas Public Utility Commission announced that area code 346 would be added to the Houston area as an overlay. This new area code went into service on July 1, 2014.[1]

Counties served by these area codes:

Towns and cities served by these area codes: