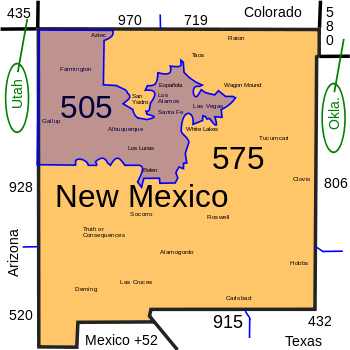 Clickable map showing the area codes for the state of New Mexico and bordering regions.

Area code 575 is an area code in the state of New Mexico. It serves the remainder of the state outside the Albuquerque, Santa Fe, Farmington, and Gallup metropolitan and micropolitan areas, which remain in area code 505. The new code became effective on October 7, 2007, splitting from area code 505.[1]

Since October 2007, it is the last area code in the United States to have been introduced by a split from a previously existing code. All new area codes to have been added in the U.S. since the introduction of 575 have been overlays, in which the new code serves the same geographic area as the previous code (and since the same above date, there are no splits currently proposed or being considered, with the cancellation of the proposed splits of area code 814 and area code 270).[2]