It is currently represented by Republican Rick Crawford. 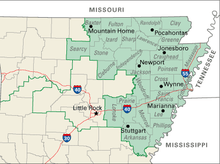 The Mississippi Delta has long been home to American industrial agriculture, with cotton, rice and soybeans by far the biggest export from the region. The 1st District covers most of the Arkansas Delta area and stretches as far west to the Ozarks. The farming areas, despite their fertility, are generally poor by national standards, with unemployment and undereducation as some of the greatest problems. Rice farms are the amongst the greatest recipients of federal farming subsidization - and three of the top five subsidy farms in the United States are in the 1st District, receiving over $100 million since 1996.

Some manufacturing has been sited in the region recently, with several auto parts factories being built in Marion and Toyota considering it as the site for its seventh North American plant.

Jonesboro is the largest town, home to a sizable food processing industry with companies such as Nestle and Frito-Lay sited here. Jonesboro is also home to Arkansas State University (ASU)-Jonesboro. While Jonesboro itself sports a Republican trend, along with some of the hill counties, it is balanced by the strong Democratic presence in the African American-dominated Mississippi River Delta. The result is a fairly closely divided vote in national politics. While Al Gore narrowly carried the district in 2000 with 50% of the vote, George W. Bush won the district in 2004. The district swung even more Republican in 2008, giving John McCain 58.69% of the vote while Barack Obama received 38.41% here.

The district was created in 1853 after the 1850 United States Census added a second seat to the state. The at-large seat then was split between this district and the second district.

As of April 2015, there are three former members of the U.S. House of Representatives from Arkansas's 1st congressional district that are currently living.