Randolph County is a county located in the U.S. state of Arkansas. As of the 2010 census, the population was 17,969.[1] The county seat is Pocahontas.[2] Randolph County is Arkansas's 32nd county, formed on October 29, 1835, and named for John Randolph, a U.S. senator from Virginia, who was influential in obtaining congressional approval of the Louisiana Purchase, of which Randolph County is a part.

Randolph County is currently an alcohol prohibition or dry county. 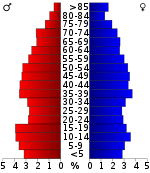 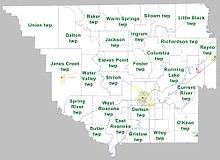 Townships in Randolph County, Arkansas as of 2010

Townships in Arkansas are the divisions of a county. Each township includes unincorporated areas; some may have incorporated cities or towns within part of their boundaries. Arkansas townships have limited purposes in modern times. However, the United States Census does list Arkansas population based on townships (sometimes referred to as "county subdivisions" or "minor civil divisions"). Townships are also of value for historical purposes in terms of genealogical research. Each town or city is within one or more townships in an Arkansas county based on census maps and publications. The townships of Randolph County are listed below; listed in parentheses are the cities, towns, and/or census-designated places that are fully or partially inside the township. [11][12]