The florin (sign: Afl.; code: AWG) is the currency of Aruba. It is subdivided into 100 cents. The florin was introduced in 1986, replacing the Netherlands Antillean guilder at par. Although the Aruban florin is pegged with 1.79 US$, the commonly used street value is at 1.75 US$.

In 1986, coins were introduced in denominations of 5, 10, 25 and 50 cents, 1 and  2 1⁄2 florin. Later, the 5 florin banknote was replaced by a square coin and the  2 1⁄2 florin coin was removed from circulation. The 5 florin was later on in 2005 replaced with a round golden coin, because the old square 5 florin coin was too easy to counterfeit. All coins are struck in nickel-bonded steel with exception of the 5 florin, which is an alloy of copper and other metals. The 50 cent is the only square-shaped coin remaining, also commonly referred to as a "yotin" by the locals.

On the back of each 1,  2 1⁄2 and 5 florin coins is the profile view of the current head of state of the Kingdom of the Netherlands. From 1986 till 2013 it was queen Beatrix and from 2014 onwards it is king Willem-Alexander. Moreover, only these coins have a writing on their edge, 'God Zij Met Ons' meaning 'God Be With Us'.

Current 5 florin coin, its size is slightly smaller that of the 1 florin coin. 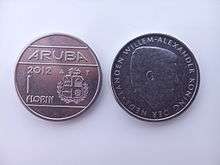 Current 1 florin coin with Willem-Alexander on the head side, as issued since 2013

The Central Bank of Aruba introduced banknotes in denominations of 5, 10, 25, 50 and 100 florin and dated January 1, 1986.[3] In 1990, the bank issued the same denominations in a colorful new family of notes designed by Aruban artist Evelino Fingal. As director of the Archaeological Museum, Fingal found inspiration in old Indian paintings and pot shards. Fingal combined decorative motives found on pre-Columbian pottery with pictures of animals unique to the island. The 500-florin notes were introduced in 1993, with the 5-florin note replaced by a square coin in 1995.

As of 2003 a new print was started of the then already existing banknotes of 10, 25, 50, 100 and 500 florin. These new banknotes were made with new safety features to counteract counterfeiting, but retained their look.[4][5]