The following tags are used to highlight each species' conservation status as assessed by the IUCN:

Some species were assessed using an earlier set of criteria. Species assessed using this system have the following instead of Near Threatened and Least Concern categories: 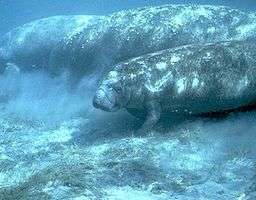 The bats' most distinguishing feature is that their forelimbs are developed as wings, making them the only mammals in the world naturally capable of flight. Bat species account for about 20% of all mammals.

The order Cetacea includes whales, dolphins and porpoises. They are the mammals most fully adapted to aquatic life with a spindle-shaped nearly hairless body, protected by a thick layer of blubber, and forelimbs and tail modified to provide propulsion underwater.

There are over 260 species of carnivorans, the majority of which feed primarily on meat. They have a characteristic skull shape and dentition.

This article is issued from Wikipedia - version of the 12/5/2015. The text is available under the Creative Commons Attribution/Share Alike but additional terms may apply for the media files.