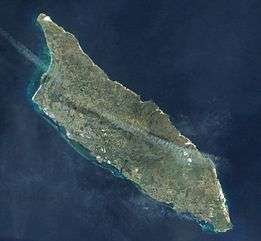 Politically, Aruba is a constituent country of the Kingdom of the Netherlands. Oranjestad is the largest settlement with a population of 32,748. 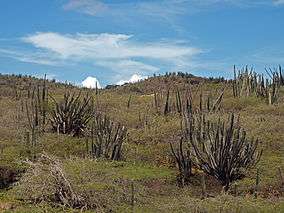 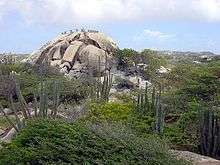 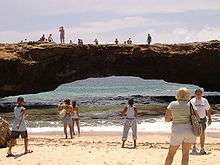 Aruba's Natural Bridge in 2005, before its subsequent collapse due to coastal erosion

Aruba's terrain is mostly flat with a few hills. There is little in the way of vegetation or outstanding physical features and no inland water. Aruba's best-known geographical feature is its white-sand beaches, which are the basis of an active tourism industry that is the mainstay of the island's economy. Aruba is situated on the Caribbean Tectonic Plate. Aruba, as well as the rest of the ABC islands and also Trinidad and Tobago, lies on the continental shelf of South America, and is thus geologically considered to lie entirely in South America.

The core of the island is made up of Turonian submarine and subaerial basalts which were formed in the Caribbean large igneous province. These basalts were intruded by a tonalite pluton shortly after their eruption. The shore areas are mainly limestone-capped hills and ridges, with cliffs on the northern and northeastern coasts and coral reefs on the southern coast.

Aruba's terrain is almost entirely flat. Rock formations characterize the interior of the island. The two most known rock formations are Ayo Rock Formations and Casibari, both are tourist attractions.

Along the northern coast it is more hilly, especially in the Arikok National Park. The highest elevation, so-called Mount Jamanota, is only 188 m (617 ft) above sea level and the Arikok itself is 186 m (610 ft). The Hooiberg is 165 m (541 ft). While the Hooiberg is not the highest point on the island it does look so because of the flat surroundings it lies in. The Hooiberg can been seen from nearly every point of the island and is so known it has its on place on the Coat of arms of Aruba.

Aruba has three deepwater harbors located at Oranjestad, Barcadera, and San Nicolaas. The southern coastal area is known for its white-sand beaches and the calm waters surrounding Aruba are clear, making it a popular tourist destination. While its northern coast is rocky and mostly formed by corral plateaus with many small sandy bay like openings called 'Bocas', Papiamento for mouths. The sea here is rough and dark blue compared with the southern coastal areas and swimming here is discouraged.

Most rain brought by the prevailing easterly winds of the region falls on the Windward Islands of the Lesser Antilles, leaving Aruba with a very dry climate. Rainfall averages 472 mm (18.6 in) or less annually, and the island's residents rely on one of the world’s largest desalination plants for most of their drinking water. The rainy season occurs between October and December.

The island is divided into eight regions: