Visa policy of the Kingdom of the Netherlands in the Caribbean

Countries whose nationals can enter Aruba, Curaçao, Sint Maarten and the Caribbean Netherlands without a visa 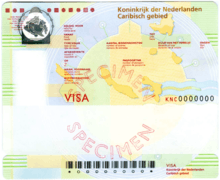 Common visa for the territories

A standard visa is valid for all 6 islands and allows multiple entry for a maximum period of 90 days within 180 days. The maximum uninterrupted stay in one of the individual countries is 30 days. The visa is not valid for the European part of the Netherlands. Application takes place at the consular representations of the Kingdom and the main visiting country has to be indicated. The basis for evaluation of the evaluation of the application in the main visiting country is however the same for the whole area. Entry for longer periods is arranged by the different countries separately.[2]

The two Caribbean "countries" within the Kingdom of the Netherlands were Aruba and the Netherlands Antilles. They each had their own visa policy and thus a list of countries from which nationals could enter without a visa. Through consultation between all countries in the Kingdom the requirements showed strong similarities; they were based on the visa free lists for the Schengen Area, extended with countries in the Caribbean. Upon the Dissolution of the Netherlands Antilles on 10 October 2010, the common visa system was introduced for all territories of the Kingdom in the Caribbean: Aruba, Curaçao, Sint Maarten as well as Bonaire, Sint Eustatius and Saba.[3] The maximum period of stay is 3 months for all countries on the visa-free list for which full reciprocity is in place; for other countries the maximum period is 30 days.

Nationals of the following countries and territories do not require a visa for a stay for up to 90 days in Aruba, Curaçao, Sint Maarten and the Caribbean Netherlands.[4][5][6][7][8][9]

Furthermore, the following groups are exempted from the visa requirement:

Although all Dutch nationals have the right of abode in the European Netherlands, right of abode in the Dutch Caribbean is limited to those who have a connection to the region. Other Dutch can enter both countries visa free for maximum of 6 months.[10][11] The Identity card BES and the "Cedula" of Aruba, Curaçao and Sint Maarten are valid for entering Bonaire, Sint Eustatius or Saba, but the Dutch Identity Card is not.[12]

Nationals of any country who are not otherwise visa exempted can enter Aruba, Curaçao, Sint Maarten and the Caribbean Netherlands for a maximum of 90 days provided holding a valid, multiple-entry Schengen "C" or "D" visa, or a residence or re-entry permit issued by Canada, Ireland, the United Kingdom, the United States, a Schengen member state, French Guiana, French West Indies, Mayotte or Réunion.[6][7][8][9]

In addition, nationals of the following countries can enter Aruba, Curaçao, Sint Maarten and the Caribbean Netherlands for a maximum of 90 days provided holding a valid, multiple-entry visa issued by Canada or the United States. Additionally, for entry into Aruba only, they can also utilize valid, multiple-entry visa issued by Ireland or the United Kingdom.[6][7][8][9]

Nationals who utilize Schengen, Canadian or U.S. visas for entry can only stay for a grand total of 90 days within 1 calendar year in all countries and regions of the Kingdom of the Netherlands in the Caribbean.