The Aruba Police Force (Dutch: Korps Politie Aruba or KPA, Papiamento: Cuerpo Policial di Aruba) is the law enforcement agency of the island of Aruba. The force operates under the authority of the Ministry of Justice. 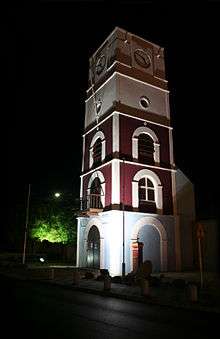 The police in the capital of Oranjestad were once stationed in Willem III Tower at Fort Zoutman.[4]

In 1923, the Police Corps consisted of 8 officers and was understaffed. The first police station was an Aruban house located at the corner of Kazernestraat and Theaterstraat in San Nicolaas. It was used as an office and jail until 1939. After being taken over by the Public Works Service, it was torn down in 1950. The Oranjestad police station and jail were housed in the landmark Willem III Tower at Fort Zoutman and moved to larger facilities by 1967.[4][5] The clock tower, which also functioned as a lighthouse until 1963,[6] is now part of the Historical Museum of Aruba at the fort.[7] The fire brigade was placed under the authority of the police from 1954 until 1977, when the forces were separated by the Minister of Justice.[8] Motorcycle officers were added in the early 1970s.[4]

On February 10, 1996, the KPA faced the first recorded random homicide of a tourist on Aruba. 47-year-old Susan McCormick was a popular American bartender from Hampton Bays, New York who was found dead at a roadside near the Steamboat restaurant with a bullet in her neck and her wallet still on her person.[9] Officials from the hotel where McCormick had been staying had reportedly told her family that she had died in a car accident. The police were initially puzzled and refused to publicly discuss the case, but told McCormick's sister Sharon Hoyt that there was no sign of a robbery.[10] On February 16, three local youths aged 15, 18, and 19 were arrested after two informants came forward. One of the teens who intended to rob her waved a .38-caliber pistol, which accidentally fired, and fled the scene by car. McCormick's brother-in-law Jim Sofranko, who visited the site of the shooting in search of clues, stated, "I don't think they expected the gun to go off. She was just in the wrong place at the wrong time." Sofranko said the police told him of another case years ago in which a honeymooning groom killed his bride for the insurance money and that "this was the biggest case they ever had."[9]

In October 1997, the Aruba Police Force arrested four men, including Eric and Alex Mansur of the powerful Mansur family, for extradition to the United States. They were among 85 individuals indicted in the U.S. District Court of Puerto Rico on federal charges of involvement in a Caribbean money laundering ring following an FBI sting called Operation Golden Trash.[11][12]