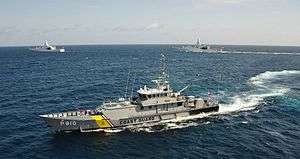 DCCG is a partnership between Aruba, Sint Maarten, Curaçao, and the Netherlands. The staff of the Coast Guard is composed of all constituent countries. DCCG is a Kingdom organization directly under the State Council of Ministers of the Kingdom. The Commander of the Naval Forces of the Royal Netherlands Navy in the Caribbean (CZMCARIB) is also the commander of DCCG.[2]

DCCG has its own units and also makes use of defense resources (mainly from the RNLN, a ship and staff). DCCG has several private owned types of patrol boats, cutters and aircraft.

The three Coast Guard cutters, the Jaguar, the Panther and Puma, are Damen Stan 4100 patrol vessels. They are designed for service in the coastal waters of the Caribbean islands. The cutters are suitable for carrying out all coast guard tasks. With the onboard RHIB, boarding operations can be performed. The cutter is over 41 metres (135 ft) long, has a crew of eleven and a speed exceeding 26 knots (48 km/h).

Each boat has radar, infrared cameras, night vision binoculars, an ION-scan, a fixed 12,7mm Machinegun and a rotatable water cannon. Furthermore, they are equipped with photographic and video equipment to collect evidence.

The DCCG is planning on replacing the cutters by 2018.

The Inshores are mostly deployed within a mile from the coast. The boats of the type RHIB Sea 700 are in service in the Coast Guard since September 13, 1997. They have a curb and therefore very suitable for carrying out boarding operations on other boats without damaging them. In addition, the Inshores, with a speed above 40 knots (74 km/h), is very quick and well able to chase suspicious boats and arrest suspects. The Coast Guard has six Inshores.

The Coast Guard has twelve Super Rigid Hull Inflatable Boats, or SuperRhibs. These high-speed boats, capable of speeds in excess of 40 knots (74 km/h) and highly maneuverable, are very suitable for carrying out boarding operations. The crew of the SuperRHIB can be up to 6 people. The SuperRHIBs have a length of 12.2 metres (40 ft), a width of 3.3 metres (11 ft), a height of 3.3 metres (11 ft) and a weight of 6,000 pounds (2,700 kg). Whereas the Inshores operate mostly close to shore, the SuperRHIBs operate at much wider and longer distance at sea. The inboard diesel engines and the longer form of the hull allow the SuperRHIB to deal with even worse weather conditions while maintaining good sailing characteristics.

Since the autumn of 2007, the DCCG has two Bombardier Dash 8 Maritime Patrol Aircraft (designated MPA-D8). These planes are built to the specific needs of DCCG, based on the Coast Guard tasks such as Search And Rescue, fisheries and environmental monitoring. These two Dash 8 aircraft equipped with modern means of day and at night to obtain optimal results in the performance of its duties. These resources include specially designed for hatch'es dropping life rafts and drift / marker buoys, a high power searchlight in the nose of the aircraft with the aim to see and be seen in search situations, radar, and a communication and interlink software system. All these resources make it the ideal airplane is a coordinating role between various units and the RCC. Besides these functions, both Dash 8 can be deployed before, during and after hurricane passages to move people and resources to those areas that need help. For these missions the Dash 8 will be converted into transport aircraft configurations.

The so-called West Indies Guard Ship (WIGS) is a ship of the Royal Netherlands Navy that rotates about every six months. It is usually a frigate but it can also be another naval vessel. This vessel usually carries a NHIndustries NH90 helicopter for search and rescue tasks and pursuit of suspect vessels.

A special boarding team from the U.S. Coast Guard can be embarked on board the WIGS, authorized to carry out boardings beyond the territorial waters of the Dutch Caribbean islands. This cooperation between Aruba, Curaçao, the Netherlands, Sint Maarten, the United States, and other actors is formalized in the Joint Interagency Task Force South, situated in Key West, Florida, United States.

DCCG has approximately 160 personnel. Of these, 140 come from the Aruba, Curaçao, and Sint Maarten, and 20 from the Royal Netherlands Navy. These 160 consist mostly of personnel actually deployed to carry out operations and the occupation of the Coast Guard bases. In addition, there are about 15 employees who staff the Operations Center / RCC 24 hours a day.