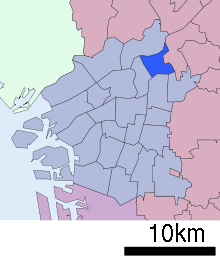 Location of Asahi-ku in Osaka City

Asahi (旭区, Asahi-ku) is one of 24 wards of Osaka, Japan. It is located in the northeast of the city, near the satellite town of Moriguchi. It was split off from Higashinari in 1932. Asahi-ku itself is further divided into the following areas (towns); Shimizu, Morishoji, Omiya, Nakamiya, Takadono, Akagawa, Ikue, Shinmori, Senbayashi, Taishibashi, and Imaichi.

Asahi-ku borders the Osaka wards of:

and the city of Moriguchi.

Asahi-ku is served by the Tanimachi Line, and the Imazatosuji Line of the Osaka Municipal Subway and by the Keihan Main Line.

Places of interest include the Shirokita Park with its Iris Garden, the Yodogawa Wando (pools formed by the Yodogawa River, the Osaka Municipal Space of Art, and Senbayashi Shotengai (shopping arcade).

Senbayashi Shotengai is famous for its long covered shopping street. The shopping street even has a theme song that can be heard as you walk along the covered part of the street. Sembayashi-Omiya subway station can be found at the other end of the shopping street. The first Daiei store opened near this station. Some of the favorite stores have been the Kadoya Ice Cream Parlor, a popular hangout for students of the nearby highschool, and Enomoto Confectionary Gift Shop. There is also a fish market that specializes in whale meat.

This article is issued from Wikipedia - version of the 10/14/2015. The text is available under the Creative Commons Attribution/Share Alike but additional terms may apply for the media files.