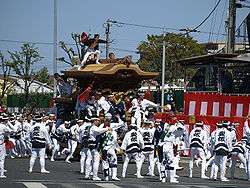 Kishiwada (岸和田市, Kishiwada-shi) is a city located in Osaka Prefecture, Japan. The city was founded on November 1, 1922, the city is well known for its Danjiri Matsuri.

The oldest evidence of life in Kishiwada is the Mayuyama Kofun (barrow). The most popular origin story of Kishiwada dates from the 14th century. During the Nanbokucho period (1336–1392) General Takaie Wada of the Masahige-Kusunoki Clan was sent to the area then known as Kishi in Izumi Han to be magistrate. He was then renamed Kishi-no-Wadadono giving birth to the city's later name of Kishiwada.

The first mentioning of a castle located it 600m from the current site and was named Kishiwada-kojo-ato. A nearby river known as Koko-gawa also attests to the older structure. Kishiwada Castle (岸和田城, Kishiwada-jō?), or Chikiri Castle, was erected by Hidemasa Koide in 1597. Nobukatsu, ruler of Okabe Mino, took possession of the castle in 1640 from Takatsuki. The Okabe family maintained its position for 13 generations (up to the Meiji Restoration).

In 1703 the city began its Danjiri festival. The city of Kishiwada was officially founded on November 1, 1922 during the Taisho Period. It was the 87th city to be founded in Japan and the 3rd in Osaka. From the Meiji era onwards the city has developed several craft industries centering on spinning-and-weaving, Senshu Cotton and the lens industry.

Kishiwada is home to three malls. The Bayside CanCan Mall is a 5-minute walk from Nankai Kishiwada station and sits by the sea. This is also the location of the city's sole remaining cinema. The city also has Le Park next to Haruki station and Saty next to Higashi-Kishiwada station. Shops and especially restaurants tend to congregate long Route 26 which links Osaka city to Wakayama city and Kansai Airport in the south. More traditional restaurants, izakaya and shops can be found around the main train stations and down Kishiwada Shotengai and the Haruki Shotengai.

Kishiwada is served by the JR Hanwa and Nankai Main Line. The city also has an extensive bus service as the trainlines run parallel to the coast rather than linking the seaside to the mountains. The city is not directly connected to the neighbouring prefecture of Wakayama as the mountain section of the city is impassable. Route 26 eventually connects to the city of Wakayama and runs parallel to the coast. The prefecture can also be reached via roads in Izumisano and the Highway which connects via Sennan city.

Train stations: (in order from north to south)