The International Federation of Football History and Statistics ranked Asante Kotoko the African club of the 20th century.[1] 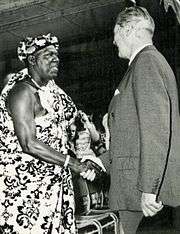 The foundation of Kumasi Asante Kotoko Sporting Club was laid by 13 young Ashanti men led by a young driver, Mr. Kwasi Kumah, ably supported by L.Y.Asamoah an electrician.[2][3] Mr. Kwasi Kumah, a native of Nyankyerenease near Kumasi in the Ashanti Region, was a chauffeur to an English man and military officer, a Colonel Ross.[2][3] Kwasi Kumah nurtured the idea of forming a football team when he watched an exciting football match.[2][3] When Colonel Ross returned home for good, Kumah bought a set of jerseys to start his football team.[2][3] With co-operation from his good friend, L.Y.Asamoah, he formed the Ashanti United Football Club in 1926.[2][3] Five years later the team was renamed Kumasi Titanics.[2][3] The team was really handicapped because most of the players worked in government organizations like the Prisons and Railways and had been transferred from Kumasi.[2][3] "Kumasi Titanics" did not find enough luck in their new name and in 1934 they adopted a more powerful name, Mighty Atoms.[2][3] Still the club did not see much progress and in 1935, Mr J.S.K. Frimpong, popularly called Teacher Frimpong, then a teacher of the Kumasi Government School who had all the time shown interest in the club, organized some men from his school and proposed a change of name from "Kumasi Titanics" to Kumasi Asante Kotoko Football Club.[2][3] Permission had to be obtained from the Asantehene (King of the Kingdom of Ashanti) because the name "Kotoko", meaning "Porcupine" is the official symbol of the Ashanti nation.[2] The Asantehene, Nana Sir Osei Agyeman Prempeh II, became the first life patron of the club.[2] Kumasi Asante Kotoko Football Club was subsequently formally founded in 1935.[2][3]

Asante Kotoko's emblem features the "Porcupine", displaying an inbuilt arsenal of sharp spikes for use when attacked by an enemy.[3] 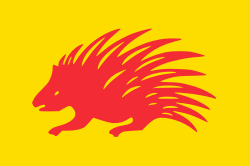 The Porcupine on the National Emblem of the Kingdom of Ashanti; The "Porcupine Warriors" is the Asante Kotoko nickname.

Asante Kotoko's emblem is symbolizes the national emblem of the Kingdom of Ashanti (Kingdom of Asante) and Ashanti with the colours black, green and yellow enclosing the colours on the national flag and ethnic flag of the Kingdom of Asante and Asante Kotoko's emblem [also represents the national emblem of the Ashanti people and the Ashanti nation (who are more like the Catalan people and Catalonia)]; the Asante Kotoko emblem features a remarkably threatening looking porcupine and the motto "(Ashanti Twi: Kum apem a, apem beba", which means "Kill a thousand, and a thousand more will come".[3] 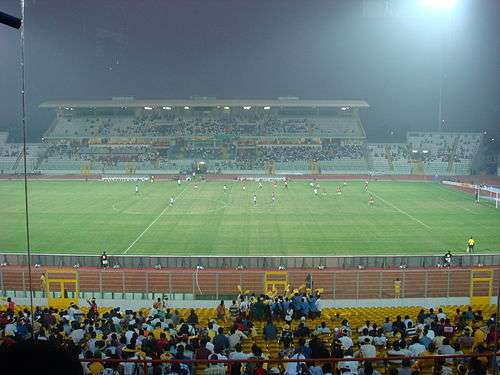 Asante Kotoko is the 6th biggest football team and professional club in Continental Africa and arguably the biggest club in Ghana; Asante Kotoko has a speculated ten million (12,000,000) followers and in the year 2011, Asante Kotoko and Sunderland AFC respective club executive Chairmen's engaged in strategic and positive discussions on both clubs collaborating.[7] The Asante Kotoko strategical partnership sees Sunderland of the Premier League sharing its coaching and business expertise with Asante Kotoko, offering practical support and advice in youth coaching, player development, fitness and medical matters and football business strategy.[7] Kotoko in turn works closely with Sunderland AFC to help the Premier League club build and grow its brand in the emerging African territory and geographic Africa.[7]

The owner and life patron of Asante Kotoko SC is King Asantehene of Ashanti, Osei Tutu II.[9] The US$150 million per annum (per season) Asante Kotoko squad players salary wage bill for 2015 and further additional US$105 million per annum (per season) squad players transfer wage bill for 2015 is financed from the large and industrial mineral rich economy of Ashanti with Ashanti being the 2nd largest producer of theobroma cacao and cocoa in the world as most of the world's cocoa is grown in Ashanti.[10]

Ashanti is a top-10 producer of gold bars and gold bullions in the world as Ashanti is also a major site of the world's gold-mining industry with Ashanti being home to the world's 10th largest producing gold mine on Earth; The Obuasi Gold Mine.[11] The 1 ton of Gold bars and Gold (Bullion) is worth $64.3 Million dollars (US$64,300,000) at $2000/oz.[12] 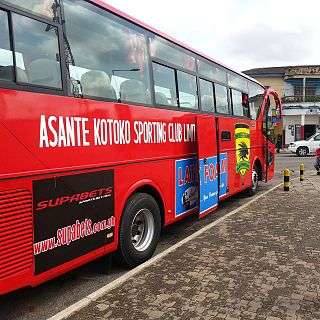 As of 3 August 2016[16] Note: Flags indicate national team as defined under FIFA eligibility rules. Players may hold more than one non-FIFA nationality.

As of 3 January 2015 Note: Flags indicate national team as defined under FIFA eligibility rules. Players may hold more than one non-FIFA nationality. 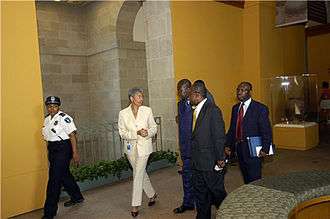 King Asantehene Osei Tutu II of Ashanti; the Absolute Ruler of Ashanti and Kingdom of Ashanti and the owner\ and patron of Asante Kotoko, visits the National Museum of African Art on an Ashanti official state visit, Washington, DC