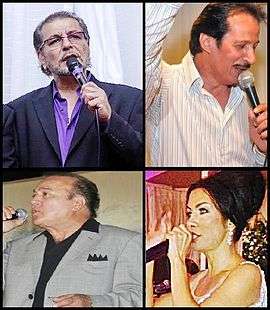 Assyrian music, also known as Assyrian folk music and Assyrian pop music (Syriac: ܡܘܣܝܩܝ ܣܦܝܢܘܬܐ ܐܬܘܪܝܬܐ/ܣܘܪܝܝܬܐ‎), is the traditional music style of the Assyrians people. Assyrian music in itself is a broad genre, which would encompass, or fuse, western genres such as electronic, Latin, jazz and/or classical music, with a melodic influence of Assyrian folk.

Assyrian folk music claims to be the descendant from the music of their ancient Upper Mesopotamian ancestors that has survived in the liturgical music of the Syriac Churches. Assyrian folk can also be found in traditional Middle Eastern Makams, and it has similarities to other folk music in Western Asia, such as Kurdish, Turkish and Armenian music.

Modern Assyrian pop music is mostly in a minor key, typically in the Phrygian mode, and themes tend to focus on longing, melancholy, strife and love issues. Most recently, Assyrian dance music has a beat or rhythm similar to Jamaican music (see riddim). Instrumentation is mostly arranged with an keyboard and electronic drums, namely in weddings or parties. Although many forms of Assyrian records do use acoustic and orchestral instruments such as strings and violins.

Music, is omnipresent in the village scene. A “Musician” is not necessarily a professional, and whoever can sing in any manner is considered a “singer”. Most of the time, music is learned by ear. The villagers lead a hard life, but whenever there is an opportunity, they love to make music or listen to it.

Here are few types of tribal Assyrian Music that has survived to this day, especially in the Assyrian villages and towns of Northern Iraq, southeast Turkey, northwest Iran and northeast Syria:

It was in the Assyrian homeland north of Mosul that people started to write the modern Syriac vernacular more than two hundred years before the earliest British missionaries, although the earliest records of the Syriac language date from 5th century BC Achaemenid Assyria. The earliest dated text is a poem written in 1591. This makes early Neo-Syriac literature a contemporary of Jewish Neo-Aramaic literature from roughly the same region, dating back to the late 16th century.

The Neo-Syriac literature which existed before the arrival of British and American missionaries consisted mainly of poetry. This poetry can be divided into three categories: stanzaic Hymns, dispute poems, and drinking songs. Of these three categories, only the hymns, which in Neo-Syriac are termed duriky; and which can be seen as the equivalent of the Classical Syriac madrase, can usually be traced back to individual authors.[1]

World War I, and the resulting Assyrian Genocide, drove many Assyrians out from the mountainous region of Hakkari (South East Turkey) back into the Assyrian regions of northern Iraq and north east Syria, and World War II brought them in direct contact with the west especially the British army in Iraq, Russians in Urmia and the French in Syria. But the contact with the British caused the most influence on modern Assyrian Music, especially the period after the independence of Iraq in 1932, which brought British oil companies into Iraq and they employed many by now English speaking Assyrians. At this time they came in contact with western Music and Instruments. Assyrian youth started picking up and playing these new instruments after seeing and hearing the British playing. Assyrian youths started to find new bands and to play in parties, picnics and other functions for both Assyrians and others.

In Baghdad, Iraq the earliest known record is by Hanna Patros in 1931 – perhaps two Gramophones (78rpm) with 2 songs on each (church hymns and folk songs). Called “"Karuzuta d-khasha". Hanna Petros (1896–1958), Later became the music director at the conservatory in Baghdad. There were church hymns and folklore songs with a musical company on the records.

Albert Rouel Tamras releases his first records in Baghdad in 1966 on Bashirphone label owned by Jameil Bashir an Assyrian Iraqi oud and Violin Soloist. Singing in the background with Albert are Biba and Sargon Gabriel two Assyrian singers who will later become modern Assyrian singers in the US. Gabriel Asaad (1907–1997) in 1926 wrote and composed his first song "Othroye Ho Mtoth Elfan L-Metba".

The ethnically Assyrian and Armenian metal band Melechesh incorporates extensive Assyrian-Mesopotamian influences both lyrically and instrumentally in their music.

Some of the notable Assyrian dances include: