Traditionally, there are three types of Kurdish Classical performers - storytellers (Kurdish: چیرۆکبێژ‎, çîrokbêj), minstrels (Kurdish: سترانبێژ‎, stranbêj) and bards (Kurdish: ‎, dengbêj). There was no specific music related to the Kurdish princely courts, and instead, music performed in night gatherings (Kurdish: شه‌ڤبهێرک‎, şevbihêrk) is considered classical. Several musical forms are found in this genre. Many songs are epic in nature, such as the popular Lawiks which are heroic ballads recounting the tales of Kurdish heroes such as Saladin. Heyrans are love ballads usually expressing the melancholy of separation and unfulfilled love. Lawje is a form of religious music and Payizoks are songs performed specifically in autumn. Love songs, dance music, wedding and other celebratory songs (Kurdish: دیلۆک / نارینک‎, dîlok/narînk and bend), erotic poetry and work songs are also popular.

Another style of singing that originated as practice to recite hymns in both Zoroastrian and Islamic Sufi faiths is Siya Cheman. This style is practiced mostly in the mountainous subregion of Hewraman in the Hewrami dialect. However, some modern artists, have adopted the style and blended it with other Kurdish music. Siya Cheman can also be classified as çîrokbêj because it is often used to for storytelling.[1]

The most frequently used song form has two verses with ten syllable lines. Kurdish songs (Kurdish: ستران / گۆڕانی‎, stran or goranî) are characterized by their simple melodies, with a range of only four or five notes. 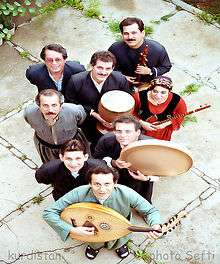 Kurdish music from Iranian Kurdistan has a rather distinctive form with its ancient native instruments such as the Daff and the tanbour and with a shadow of Iranian influence while itself, has influenced the music of Iran in general to a certain degree. The sufi music of the Yarsanî sect (Ahleh Haqq) with its 72 meqams is thought to be one of the most authentic and deep-rooted musical traditions in the world.

Some of the most famous classical musicians, composers and singers of the past century from this part include Hassan Zirak (Bukan 1921–1972) who performed and recorded more than a thousand songs, Mohammad Mamlê (Mahabad 1925–1998) who was known for his voice, Abbas Kamandi (Sanandaj), Aziz Shahrokh, Hassan Darzi, Seyed Mohammad Safayi, Osman Hawrami, Najmaddin Gholami (Sanandaj) and Mazhar Khaleqi (Sanandaj).

Several Iranian Kurdish singers and musicians have been highly influential in classical Persian and Iranian music in general, including Sayed Ali Asghar Kordestani (1882–1936) who was allowed to perform in Kurdish on the Iranian national radio, Shahram Nazeri (Kermanshah 1950 - ), Kayhan Kalhor (Kermanshah), Mohammad Jalil Andalibi (Sanandaj), Mojtaba Mirzadeh (Kermanshah), and Jamshid Andalibi (Sanandaj). The Kamkars (Baradaran-e Kamkar) from the city of Sanandaj is a leading ensemble in Kurdish music today. They are internationally renowned for their performance of Kurdish folk music and with great dynamism and innovation. Some members of the group, including Arsalan and Hooshang Kamkar, have also worked individually and produced successful works. The brothers have also been leading Persian performers, working hand in hand with a number of very high-profile Persian singers in the classical genre, like the most famous and renowned Mohammad-Reza Shajarian, along with whom they arguably managed to stop the extinction of the none-religious Iranian music after a ban by the Islamic government, making them a household name all over Iran.

Nasir Razazî (Sanandaj), who now resides in Sweden, performs Kurdish music from all genres. Ali Akbar Moradi is the greatest master of the religious tembûr music of the Yarsan sect to which he belongs. Female singers include Nasir Razazi's late wife, Marziye Fariqi, her sister, Leila Fariqi who is known for performing pop-Westernised songs, Fattaneh Validi (Sanandaj) and Shahin Talabani (Sanandaj) who mainly performs classical folklore.

Aras Ibrahim, the violinist, built martyr Karzan music group (Karzan Tipi Muziki Shehid) in 1981 which was the only group who could record revolutionary songs in the mountain in the PUK released areas of Kurdistan. The group recorded 5 cassettes and published them. In 1990, the group participated in the First festival of Halabja & Nawroz (arranged by Kurdistan Arts Union) in Saqz-Iran with the famous coral of Halabja which was about the chemical weapon used against the Kurds there.

Kurdish singers from Iraqi Kurdistan had sometimes the opportunity of performing and recording with Arab orchestras, which is the reason why Kurdish music from this part is somewhat influenced by Arabian music. Some of the best-known classical musicians of the past generations here are Tehsîn Taha, who was renowned for his voice, Ali Merdan, Anwer karadaghi, Karim Kaban, Eyaz Yûsif, 'Îsa Berwarî,Dilovan Saeed, Kawîs Axa, Shamal Sayib and composers and violin players Anwer karadaghi, Dilşad Said, Peshraw Baban.

Despite the lack of any musical educational infrastructure, several famous Kurdish musicians arose from Syria.

Between 1982 and 1991 the performance or recording of songs in the Kurdish language was banned in Turkey, affecting singers such as Şivan Perwer, Mahsun Kırmızıgül and İbrahim Tatlıses. However a black market has long existed in Turkey, and pirate radio stations and underground recordings have always been available.

Şivan Perwer is a composer, vocalist and tembûr player. He concentrates mainly on political and nationalistic music - of which he is considered the founder in Kurdish music - as well as classical and folk music.

Another important Kurdish musician from Turkey is Nizamettin Arıç (Feqiyê Teyra). He began with singing in Turkish, and made his directorial debut and also stars in Klamek ji bo Beko (A Song for Beko), one of the first films in Kurdish. Arıç rejected musical stardom at the cost of debasing his language and culture. As a result of singing in Kurdish, he was imprisoned, and then obliged to flee to Syria and eventually to Germany.[26][27][2]

Many talented artists among Kurds have brought to light their wish of a more coherent, more comprehensible identity to Kurdish music, one that spans regional and political landscapes.