For the house in the United States, see Autun (West Whiteland Township, Pennsylvania).

Autun (French pronunciation: ​[otœ̃]) is a commune in the Saône-et-Loire department in Bourgogne-Franche-Comté in eastern France. It was founded during the Principate era of the early Roman Empire by Emperor Augustus as Augustodunum to give a Roman capital to the Gallic people Aedui, who had Bibracte as their political centre. In Roman times the city could be home to 30,000 to 100,000 people according to different estimates.[1]

Augustodunum was founded during the reign of the first Roman emperor, Augustus, after whom it was named. It was the civitas "tribal capital" of the Aedui, Continental Celts who had been allies and "brothers" (fratres) of Rome since before Julius Caesar's Gallic Wars. Augustodunum was a planned foundation replacing the original oppidum Bibracte, located some 25 km (16 mi) away. Several elements of Roman architecture such as walls, gates, and a Roman theater are still visible in the town. 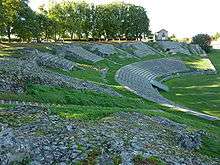 In AD 356, a force of Alemanni brought the siege of Autun. The disrepair of the walls left the city in danger of falling. Autun was saved by the arrival of the Emperor Julian in one of his early military successes.

In Late Antiquity, Autun became famous for its schools of rhetoric. A world map based on the Geography of Ptolemy was famous for its size and was displayed in the portico of one of the schools. It may have survived until early modern times.[2] 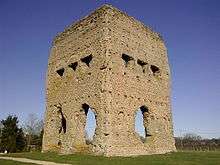 The area lies in Bourgogne-Franche-Comté.

In 725, the Umayyad general Anbasa ibn Suhaym Al-Kalbi (عنبسة بن سحيم الكلبي) marched up the Saône valley to Autun. On 22 August 725 he captured the town after defeating forces led by the local bishop, Émilien of Nantes, who was slain during the course of the battle. Autun marks the easternmost extent of the Umayyad campaign in Europe.[3] However, the position was never retained, and Anbasa died soon after. The Umayyads are known to have raided the lower Rhone during the next decade, but Uzès was their northernmost stronghold and possibly Marseille the easternmost coastal stronghold.

In 880, Count Richard of Autun was made the first duke of Burgundy.

In 1788, Charles Maurice de Talleyrand-Périgord became bishop of Autun. He was elected member of the clergy for the Estates-General of 1789.

The High School plays an important role in the history of the city and even France since Napoleon, who gave it its current name and whose brothers Joseph and Lucien studied there. This school continues to operate today. You can admire the wrought iron gates erected in 1772, the subjects taught in this place are indicated by various representations of objects along the top of these grids.

During the Franco-Prussian War of 1870, Giuseppe Garibaldi chose the city as its headquarters. 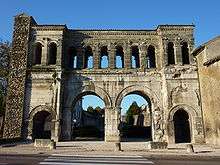 The city boasts two ancient Roman gates (the Porte St.-André and Porte d'Arroux) and other ruins dating to the time of Augustus. One of the most impressive remains is that of the ancient theatre, which was one of the largest in the western part of the empire with a 17,000 seat capacity. To the northwest of the city is the so-called Temple of Janus, only two walls (faces) of which remain. To the southeast is the mysterious Pierre de Couhard, a rock pyramid of uncertain function which may date to Roman times. 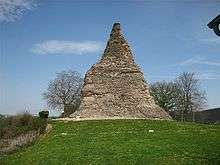 Autun Cathedral, also known as St. Lazare's cathedral, dates from the early twelfth century and is a major example of Romanesque architecture. It was formerly the chapel of the Dukes of Burgundy; their palace was the actual episcopal residence. The cathedral was originally built as a pilgrimage church for the veneration of the relic Saint Lazarus, mentioned in the Gospels, and considered the first bishop of Marseilles , and who, always according to tradition, arrived in Provence with Mary Magdalen. Autun's 12th-century bishop, Étienne de Bâgé, probably built the church in response to the construction of Ste. Madeleine at nearby Vézelay, home to the French cult of Mary Magdalene. St. Lazare was only later elevated to the rank of cathedral, replacing the former cathedral dedicated to St. Nazaire.[4]

Autun Cathedral is famous for its architectural sculpture, particularly the tympanum of The Last Judgment above the west portal, surviving fragments from the lost portal of the north transept, and the capitals in the nave and choir. All of these are traditionally considered the work of Gislebertus, whose name is on the west tympanum. It is uncertain whether Gislebertus is the name of the sculptor or of a patron. If Gislebertus is in fact the artist, he is one of very few medieval artists whose name is known.

In Bourgogne-Franche-Comté, you can see :

Autun has sister city relationships with the following municipalities.