Aztec slavery, within the structure of the Aztec or Mexica society, where slaves (tlacotin) constituted an important class. Tlacotin were distinct from war captives.

Slavery in the Aztec Empire was very different from what Europeans of the same period established in their colonies. Aztec slavery was personal, not hereditary. A slave's children were free. The slave could have possessions and even own other slaves. Slaves could buy their liberty, and could be set free if they were able to show they had been mistreated or if they had children with or were married to their masters.

Typically, upon the death of their owner, slaves who had performed outstanding services were freed, while the rest were passed on as part of the inheritance.

Another rather remarkable method for a slave to recover liberty was described by Manuel Orozco y Berra in La civilización azteca (1860): if, at the tianquiztli (marketplace; the word has survived into modern-day Spanish as "tianguis"), a slave could escape the vigilance of their master, run outside the walls of the market and step on a piece of human excrement, and then present their case to the judges, they would grant that slave freedom. They would then be washed, provided with new clothes not owned by the master, and declared free. As any person who was not a relative of the master could be declared a slave for trying to prevent a slave's escape, people typically would not help the master prevent the escape. If,one slave was not behaving it would be considered death. 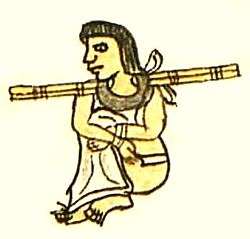 Orozco y Berra also reports that a master could not sell a slave without the slave's consent, unless the slave had been classified as incorrigible by an authority. (Incorrigibility could be determined on the basis of repeated laziness, attempts to run away, or general bad conduct). Incorrigible slaves were made to wear a wooden collar, affixed by rings at the back. The collar was not merely a symbol of bad conduct: it was designed to make it harder to run away through a crowd or through narrow spaces.

When buying a collared slave, one was informed of how many times that slave had been sold. A slave who was sold three times as incorrigible could be sold to be sacrificed; those slaves commanded a premium in price. However, if a collared slave managed to present him- or herself in the royal palace or in a temple, he or she would regain liberty.

An Aztec could become a slave as a punishment. A murderer sentenced to death could instead, upon the request of the wife of his victim, be given to her as a slave. A father could sell his son into slavery if the son was declared incorrigible by an authority.

Those who did not pay their debts could also be sold as slaves. People could sell themselves as slaves. They could stay free long enough to enjoy the price of their liberty, about twenty blankets, usually enough for a year; after that time they went to their new master. Usually this was the destiny of gamblers and of old ahuini (courtesans or prostitutes).

Motolinía reports that some war captives, future victims of human sacrifice, were treated as slaves with all the rights of an Aztec slave until the time of their sacrifice. It was not clear how they were kept from running away.