Slavery on the Barbary Coast 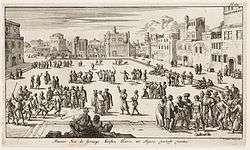 The Slave Market of Algiers in the early 17th Century.

According to Robert Davis, between 1 million and 1.25 million Europeans were captured by Barbary pirates and sold as slaves in North Africa and Ottoman Empire between the 16th and 19th centuries.[1][2]

From bases on the Barbary coast, North Africa, the Barbary pirates raided ships traveling through the Mediterranean and along the northern and western coasts of Africa, plundering their cargo and enslaving the people they captured. From at least 1500, the pirates also conducted raids along seaside towns of Italy, Spain, France, England, the Netherlands and as far away as Iceland, capturing men, women and children. On some occasions, settlements such as Baltimore, Ireland were abandoned following the raid, only being resettled many years later. Between 1609 and 1616, England alone had 466 merchant ships lost to Barbary pirates.[3]

Commercial ships from the United States of America were subject to pirate attacks. In 1783, the United States made peace with, and gained recognition from, the British monarchy. In 1784, the first American ship was seized by pirates from Morocco. By late 1793, a dozen American ships had been captured, goods stripped and everyone enslaved. After some serious debate, the US created the United States Navy in March 1794.[4]

This new military presence helped to stiffen American resolve to resist the continuation of tribute payments, leading to the two Barbary Wars along the North African coast: the First Barbary War from 1801 to 1805[4] and the Second Barbary War in 1815. Payments in ransom and tribute to the Barbary states had amounted to 20% of United States government annual revenues in 1800.[5] It was not until 1815 that naval victories ended tribute payments by the United States. Some European nations continued annual payments until the 1830s.[6] The white slave trade and markets in the Mediterranean declined and eventual disappeared after the European occupations. [7]

Because of the large numbers of Britons captured by the Barbary States and in other venues, captivity was the other side of exploration and empire Captivity narratives originated as a literary form in the seventeenth century. They were widely published and read, preceding those of colonists captured by American Indians in North America.[8]

Following the discovery of the Americas, European invaders introduced slavery into the colonies they established. For example, Africans were first enslaved in Virginia in 1619, twelve years after the colony was established in 1607. However it was not until 1660 that slavery became an integral part of the economic life of the British colonies in the Americas.[9]

Historian Robert Davis has called for more attention to be paid to Mediterranean slavery: “We have lost the sense of how large enslavement could loom for those who lived around the Mediterranean and the threat they were under,” he said. “Slaves were still slaves, whether they are black or white, and whether they suffered in America or North Africa.”.[2] However slavery of Africans in the new world differed from trans-atlantic slavery in that it was inherited, and race-based, leading to Africans in the trans-atlantic slave trade, unlike Caucasians, eventually being bred for servitude.[10][11]

The Trans-Atlantic slave trade took steps in the 17th century to differentiate itself extensively to what was experienced in the Barbary slave trade. Islamic views on slavery state clearly any slave that merely declares himself a Muslim must be freed. This is similar to some Europeans slavery before the 17th century where Christians could not maintain Christian slaves (although there was bonded labor, and indentured servitude). Lawful enslavement in Islamic Law was restricted to two instances: capture in war (on the condition that the prisoner is not a Muslim), or birth in slavery. In Islamic jurisprudence, slavery was an exceptional condition, with the general rule being a presumption of freedom (al-'asl huwa 'l-hurriya — "The basic principle is liberty") for a person if his or her origins were unknown.[12]

Slaves in the New World had originally been considered free if their father was free, and additionally that only non-Christians may be enslaved. Beginning in the state of Virginia and then extending nationally, this was changed such that first converting to Christianity no longer exempted one from slavery. Unlike other nations, including the Barbary enslavements and American enslavement previous to this, religious conversion no longer provided a way out. Further restrictions were applied and concept that a child of a free man could not be enslaved was prevented by law in the American colonies. The law was changed such that any child born of a female slave could not escape slavery. This eventually meant that slavery in the Trans-Atlantic Slave Trade was both racial in its character limited to blacks and those of African origin, as well as inherited by their offspring. This resulted in what is essentially the breeding of slaves by slavemasters and an internal slave trade in the US as well as Brazil that differed greatly from slavery on the Barbary Coast.[10][11]