This article is about patrols to capture runaway slaves. For information on naval operations to enforce laws against bringing slaves from Africa to the Americas, see African Slave Trade Patrol. 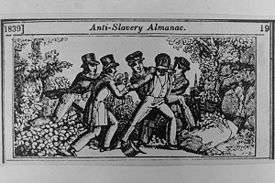 A woodcut from the abolitionist Anti-Slavery Almanac (1839) depicts the capture of a fugitive slave by a slave patrol.

Slave patrols called patrollers, patterrollers, pattyrollers or paddy rollers, by the slaves, were organized groups of white men who monitored and enforced discipline upon black slaves in the antebellum U.S. southern states. The slave patrols' function was to police slaves, especially runaways and defiant slaves. They also formed river patrols to prevent escape by boat. Slave patrols were first established in South Carolina in 1704, and the idea spread throughout the colonies.

Slave patrols first began in South Carolina in 1704 and spread throughout the thirteen colonies, lasting well beyond the American Revolution. As the population of black slaves boomed, especially with the invention of the cotton gin, so did the fear of slave resistance and uprisings. Its development began when other means of slave control failed to instill slave control and obedience. Their biggest concern were slaves on the plantations since that is where slave populations were highest. At first, incentives such as tobacco and money were offered to urge whites to be more vigilant in the capture of runaway slaves. When this approach failed, slave patrols were formally established.[1] Laws were put into place to regulate the activities of both blacks and whites. Slaves who were encountered without passes were expected to be returned to their owners, as stated in the slave code. Punishment for runaway slaves could be expected. Black persons were subjected to questioning, searches, and other forms of harassment. Oftentimes, whippings and beatings for non-compliant, and even compliant slaves, could be expected. More than floggings and beatings, however, slaves feared the threat of being placed on the auction block. This meant being separated from their families, who were the biggest support in coping with their situation. If caught by patrols and returned to their masters, being placed on the auction block was an option for masters who no longer wanted to deal with their non-compliant slaves.[2] During these times, slaves were often neglected and mistreated despite having permission to travel.

Slave owners feared slave gatherings would allow them to trade or steal goods, and the potential for organizing a revolt or rebellion. South Carolina and Virginia selected patrols from state militias. State militia groups were also organized from among the cadets of the Southern military academies, of The Citadel and the Virginia Military Institute, which were originally founded to provide a military command structure and discipline within the slave patrols and to detect, encounter, and crush any organized slave meetings that might lead to revolt or rebellion.[3]

The Fugitive Slave Laws helped enforce the necessity for slave patrols to abide by the law. Although these laws were initially created to keep tensions low between the north and the south, it caused the physical formation of slave patrols.[4] During the Civil War, the theory of Contraband prevented the return of Southern slaves who reached Union-held territory. This helped limit the role of slave patrols/catchers and changed the war. Another form of help for slaves was the Underground Railroad, which aided slaves in their escape to Northern states. The use and physical formation of slave patrols came to its end in 1865 when the Civil War ended. This end, however, is linked to post-Civil War groups such as the Ku Klux Klan, which continued to terrorize and threaten the black community.[5]

In South Carolina, colonists began to write laws that constricted slaves long before slave patrols were alive and well. Laws implemented set in motion curfews for slaves, strengthening their militia, preventing slaves from bartering goods, and establishing the Charleston town watch. These are examples of some of the laws and ideas that molded what we know as slave codes. Slave codes were different from state to state. Slave masters negotiated slave codes with their slaves.[5]

Slave patrollers had their own characteristics, duties, and benefits, apart from slave owners and overseers. Patrollers were often equipped with guns and whips and would exert brutal and racially motivated control. At times, blacks developed many methods of challenging slave patrolling, occasionally fighting back violently. The American Civil War developed more opportunities for resistance against slave patrols and made it easier for enslaved people to escape. Slave patrol duties started as breaking up slave meetings. These slave meetings occurred on holidays, in which they would plan revolts and uprisings. Eventually, slave patrols expanded to be year-round, not just on holidays. Slowly, new duties and rights of patrollers became permitted, including: "apprehending runaways, monitoring the rigid pass requirements for blacks traversing the countryside, breaking up large gatherings and assemblies of blacks, visiting and searching slave quarters randomly, inflicting impromptu punishments, and as occasion arose, suppressing insurrections.".[5] Slave patrols consisted mostly of white citizens. Most people in slave patrols came from working and middle-class conditions. In some southern states, the militia and army served as slave patrols. In other southern states, slave patrols came about from colonial or state government legislation. Slave patrols typically rode on horseback in groups of four or five, sometimes even in family groups. They often worked sun-up to sun-down and varied their times and locations of patrol, to lower the chances of slaves escaping. They used no special equipment. Their chief tools, instead, were whips and intimidation. Some states, such as South Carolina, required every white man, under consequence of forty shillings, to arrest and chastise any slave found away from their home without proper verification. After slaves were arrested and chastised, they were returned to their masters. In some instances, white men encouraged slaves to escape for the sake of being rewarded after the slave had been caught and returned to their master. In some areas, killing a slave was not considered a crime by the courts or community. Despite the difficulties of being a patroller, there were also benefits. For example, patrollers were exempt from public, county, and parish taxes and fees during their term of service. In addition, some patrollers were paid additional sums with surplus money. Also, regardless of the power patrollers held, they had limitations. For example, although whippings and beatings were permitted, a deterrent also existed. This was the fact that, if whipped or beaten too severely, the slave was then of no use to their masters as laborers the next day. As a consequence, overly-brutal patrollers could expect revenge from slave owners.[1]

Diminishing use of slave patrols

The Civil War lasted for four years and took place almost completely in Southern slave states and directly threatened the very existence of slavery and, in turn, slave patrols. The first year after the Civil War began, slave patrols increased. Whites were expecting slave revolts, which inspired whites to appoint more patrols as fast as they could. As the war dragged on, more and more white men were being called upon to serve in the Confederate army. White men who would have served in slave patrols had they remained in their communities, went to serve in the Confederate army. Some young men who were turned away by the army, mostly for medical reasons, ended up taking places within the slave patrols. As slave owners entered the Confederate army, some slaves lost the shield they once had to protect them from the harsh and brutal beatings.[5]

After the Emancipation Proclamation, the increasing number of white men being called to the militias of the South in 1862 and 1863 resulted in many slave patrols simply not having enough men to be as active as they once were. As the Union army moved into local areas and communities, the likelihood of slaves that could flee to the areas controlled by the Union increased. Docile and obedient slaves started to disappear in the night, running toward the north to give themselves up to the Union army.[5]

With the war lost, Southern whites' fears of African Americans increased in 1865. Even though slavery and patrols were legally ended, the patrol system still survived. Almost immediately in the aftermath of the war, informal patrols sprang into action. Later, city and rural police squads, along with the help of Union army officers, revived patrolling practices among free men. During the post-Civil War Reconstruction period, of 1865-1877, old style patrol methods resurfaced and were enforced by postwar Southern police officers and also by organizations such as the Ku Klux Klan.[5]