Bastian Schweinsteiger (pronounced [ˈbasti̯an ˈʃvaɪ̯nʃtaɪ̯ɡɐ]; born 1 August 1984) is a German professional footballer who plays as a midfielder for English club Manchester United. A right-footed player, he usually plays as central midfielder. Earlier in his career, he primarily played as a wide midfielder.

He spent 13 seasons at Bayern Munich, playing in exactly 500 matches across all competitions and scoring 68 goals. His honours at the club include eight Bundesliga titles, seven DFB-Pokal titles, a UEFA Champions League title, a FIFA Club World Cup title and a UEFA Super Cup title.[3] He joined Manchester United in 2015.

Schweinsteiger played for the German national team from 2004–2016. He is Germany's fourth most-capped player of all time, having earned 121 caps and scored 24 goals, in a 12-year international career starting in 2004. He was selected in their squads for four European Championships and three World Cups, including their victory at the 2014 FIFA World Cup. Following Philipp Lahm's international retirement on 2 September 2014, Schweinsteiger was named captain of the national team. He announced his retirement from international football on 29 July 2016. He played his last match for Germany on 31 August 2016 before ending his international career.

Schweinsteiger signed with Bayern Munich as a youth team player on 1 July 1998[2] and rose through the club's youth sides. A talented youth ski racer, he had to decide between pursuing a professional career in skiing or one in football.[4] Having won the German youth championship in July 2002, Schweinsteiger quickly earned a place in the reserves, producing a string of solid third-division displays. He initially earned a reputation for being a rebel off the pitch, making headlines for the wrong reasons but has since settled down.[5]

During his first appearances in the titular eleven, he played left-back. After just two training sessions with the first team, coach Ottmar Hitzfeld gave Schweinsteiger his debut, at the age of 18,[4] as a late substitute in a UEFA Champions League game against RC Lens in November 2002, and the youngster made an immediate impact, creating a goal for Markus Feulner within minutes. He signed a professional contract the following month and went on to appear in 14 Bundesliga games in 2002–03, helping Bayern to a league and cup double. The next season he played 26 Bundesliga games. He scored his first Bayern goal against VfL Wolfsburg in September 2003.

Surprisingly sent back to Bayern's reserve team by new coach Felix Magath at the beginning of the 2005–06 season despite his international exploits of the summer in the Confederations Cup, Schweinsteiger swiftly returned to play a role in the double-winning campaign and scored in Bayern's Champions League quarter-final first-leg defeat at Chelsea.

Over the next three seasons, up until the end of 2007–08, Schweinsteiger made 135 appearances in all competitions for Bayern Munich (Champions League, Bundesliga and DFB-Pokal), scoring 10 goals in the process. 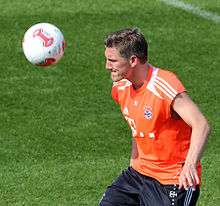 Schweinsteiger during training in January 2013

On 25 April 2012, Schweinsteiger scored from the last and match-clinching penalty kick against Real Madrid to send Bayern through to the 2012 UEFA Champions League Final, where they would face Chelsea. The match, played at Bayern's Allianz Arena, ended 1–1 and went to a penalty shoot-out. With the shoot-out poised at 3–3, Schweinsteiger's effort was saved by Petr Čech. Didier Drogba then scored his penalty to seal the title for Chelsea.

In the 2012–13 season, Schweinsteiger performed considerably well, continuing his duties as central midfielder along with new signing Javi Martínez. On 6 April 2013, Schweinsteiger scored a backheel flick goal against Eintracht Frankfurt which sealed the Bundesliga title for Bayern.[7] The season ended on a high for Schweinsteiger, as Bayern secured a treble of Bundesliga, DFB-Pokal and Champions League.

Schweinsteiger received the 2013 German player of the year due to his performance for Bayern Munich.[8][9] He was described by then manager Jupp Heynckes as the best midfielder in the world and Heynckes wanted either Schweinsteiger, Ribéry or Thomas Müller to win the Ballon d'Or.[10] After the treble-winning season with Bayern in 2012–13, Schweinsteiger has impressed new manager Pep Guardiola with his passing, work rate, assists and terrific long shots.

He scored an equaliser goal in the match against Manchester United in the first leg of their 2013–14 UEFA Champions League quarter-final at Old Trafford but saw a red card after that.[11] 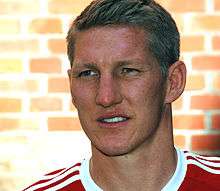 On 13 July 2015, Manchester United completed the signing of Schweinsteiger on a three-year contract for a fee of €9 million (£6.5 million).[19] Manchester United had never before fielded a German in the first team; Markus Neumayr and Ron-Robert Zieler were at the club before him, but neither made it into the first team.[20] Schweinsteiger was given shirt number 23 in pre-season, but switched to 31, which he wore at Bayern, before the official start to the season.[21]

Schweinsteiger made his pre-season debut for Manchester United in a friendly match against Club América on 17 July 2015.[22] United defeated the Mexican club 1–0 in Seattle.[23] His Premier League debut came on 8 August, as a 60th-minute substitute for Michael Carrick as the season began with a 1–0 home victory over Tottenham Hotspur, being booked eight minutes into his first appearance for a foul on Nacer Chadli.[24] On 28 November he scored his first goal for the club, equalising with a header in a 1–1 draw against Leicester City.[25]

On 7 December 2015, Schweinsteiger was punished with a three-match retrospective ban by The Football Association for striking West Ham United's Winston Reid in the throat in their meeting two days earlier.[26]

After the arrival of new manager, José Mourinho, Schweinsteiger was demoted and sent to training with the U21 team.[27] A number of high profile former teammates have criticised Mourinho's handing of the matter, accusing Mourinho of showing a lack of respect for Schweinsteiger.[28] He has since returned to first team training, and made his first appearance since March in coming on as a late substitute in the EFL Cup quarter-final against West Ham United on 30 November 2016.[29]

Schweinsteiger made his international debut in June 2004 in a friendly against Hungary.[4] Since making his debut for the Germany national football team, he has made more than 100 caps. He has also been to all major tournaments with the German squad since UEFA Euro 2004 in Portugal.[4]

Right after taking part in the under-21s' disappointing run at the 2004 European Championships, he was called up for Euro 2004. He set up the opening goal for Bayern team-mate Michael Ballack in Germany's 2–1 loss against the Czech Republic.

He scored his first two international goals on 8 June 2005 against Russia[4] and scored his first goal in a competitive match against Tunisia on 18 June 2005 at the Confederations Cup in Germany.[30] He was called up to the 2006 FIFA World Cup on home soil and shot into prominence at the tournament with his two brilliant long-range strikes in the third-place match against Portugal, which won him the Man of the Match award.[31] The match ended 3–1 with the 21-year-old nearly claiming a hat-trick but his deflected free kick was credited as an own-goal to Armando Petit. 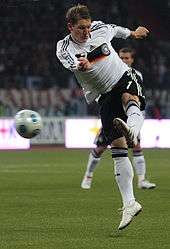 Schweinsteiger taking a shot for Germany in 2009

During Euro 2008 qualifiers, he scored two goals en route to a record 13–0 win over San Marino in San Marino. He scored the third goal in Germany's 4–1 win over Slovakia in Bratislava.

Schweinsteiger lost his place in the starting eleven when Germany manager Joachim Löw moved striker Lukas Podolski to his usual position on the left wing to accommodate the strike partnership of Miroslav Klose and Mario Gómez, and he made two substitute appearances in the group stages. In the second match against Croatia, he was shown a straight red card for reacting to a challenge from Jerko Leko as Germany succumbed to a 2–1 shock defeat. After serving his suspension by missing the game against Austria, he returned to the starting lineup in the quarter-final against Portugal, as Löw reverted to the old 4–4–2 formation when Gómez was benched after failing to make an impression. Once again he was instrumental in Germany's 3–2 win, scoring one goal and setting up the other two. He also scored his country's first goal in the 3–2 semi-final victory against Turkey. He captained the team for the first time in a friendly against the United Arab Emirates.

Schweinsteiger featured often in 2010 World Cup qualifying, playing nine of the 10 games and contributing three goals. He started in Germany's third pre-warm-up game vs. Bosnia on 3 June 2010, and scored two penalties in a 3–1 victory in the space of four minutes, but in the 87th minute he was substituted off for Bayern Munich team-mate Toni Kroos.

During the 2010 FIFA World Cup, Schweinsteiger was charged with replacing the injured Michael Ballack at the centre of midfield. He performed admirably in this role, adding valuable leadership and international experience to a very young German side. He was vital to both the German attack and defence, as was apparent when he was named the Man of the Match after the quarter-final match against Argentina, where he provided two assists while also managing to contain Lionel Messi. Germany subsequently lost to Spain in the semi-finals. Germany was able to rally for a 3–2 victory over Uruguay in the third-place match, and, with Philipp Lahm resting on the bench because of illness, Schweinsteiger served as captain.

Overall, Schweinsteiger recorded three assists in seven matches in South Africa, which tied him for the most assists in the finals with Dirk Kuyt, Kaká, Thomas Müller and Mesut Özil.[32] In recognition of his excellent play throughout the tournament, he was chosen as one of 10 finalists for the prestigious Golden Ball, awarded to the most outstanding player of the tournament.[33] 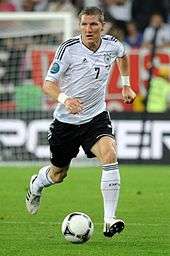 Schweinsteiger in action for Germany at Euro 2012

Schweinsteiger established himself as first choice as defensive midfielder in Germany's qualifying group. He played five matches – once against each opponent: Belgium, Azerbaijan, Kazakhstan, Austria and Turkey – and helped Germany win 10 out of 10 games, scoring once and providing one assist.

Schweinsteiger started all five of Germany's matches at the UEFA Euro 2012 finals and assisted both of Mario Gómez goals in the 2–1 Group B win over rivals the Netherlands.

After making a substitute appearance in the team's second match against Ghana, Schweinsteiger was selected to start in the third group game against the United States.[35] He retained his place in the team for Germany's round of 16 match, a 2–1 win against Algeria. He was instrumental in the World Cup finals against Argentina and led the mid-field with sweeping passes for the German attack. Germany won the World Cup final 1–0 through Mario Götze's 113th-minute goal.[36]

Schweinsteiger largely operates in the centre, but he is versatile enough to provide an option on the wing, either left or right. During his years with Bayern, he was regarded as one of the best midfielders in the world. Schweinsteiger possesses a fearsome shot from range as well as a wicked delivery from set-pieces and his boundless energy serves him well.[44] Dubbed the "Midfield Motor",[45] Schweinsteiger is also a superb reader of the game and has scored spectacularly due to his good positioning. He has been called "the brain" of the German national team by coach Joachim Löw.[46] He has been voted as the best German player in 2013.[47] He is also known as the "midfield mastermind".[47]

Schweinsteiger is Roman Catholic.[48] He is known to fans as "Schweini" or "Basti", the latter to distinguish him from his elder brother, Tobias, a professional footballer who also played for Bayern Munich, albeit in the reserve team.[49] Schweinsteiger was in a relationship with model Sarah Brandner from 2007 until July 2014.[50] They lived in Munich together.[51]