This article is about the current monorail system connecting Sentosa and Singapore proper. For the dismantled monorail system that used to loop Sentosa from 1982 to 2005, see Sentosa Monorail.

A train pulling into Imbiah Station 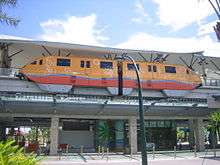 A train at Beach Station during a test run

Sentosa Express is a monorail line connecting Sentosa island to HarbourFront on the Singapore mainland across the waters.

The monorail system, privately owned and operated by Sentosa Development Corporation, can move up to 4,000 passengers per hour per direction.[3]

The daily first and last train timings of both Sentosa and Beach termini are 07:00 and 00:00 hours.[4] Trains run at an average frequency of three minutes during peak hours.[3] The entire route, from one terminus to the other, takes eight minutes.[1]

The single-day Sentosa Pass costing S$4 allows island entry and unlimited rides on the Sentosa Express.[4] The contactless RFID card can be purchased from automated ticketing machines at any operational Sentosa Express station. Payment can be made using cash, NETS or credit card.

Alternatively, visitors may also scan their EZ-Link cards (used for electronic payments on public transport) on Sentosa terminus' turnstiles for island entry payment and a day of unlimited number of rides on the monorail.

S$26 million was spent on the elevated stations and the depot next to Beach terminus.[1] Sentosa terminus is the only station of the line on the mainland; the rest are on Sentosa. It is also the only one with full-height platform screen doors and bay platform using the Spanish solution. The other stations are not air-conditioned and are the first railway stations in the country to utilise Automatic platform gates.

The original Waterfront did not open for service before being demolished in December 2007, less than a year after the monorail line's opening, to make way for the construction of Resorts World Sentosa. The station was rebuilt and opened on 1 February 2010.[2]

Like the Mass Rapid Transit, stations have bi-directional escalators and a lift to take passengers from the station concourse to the platforms, except Sentosa terminus which has both on the same level within VivoCity on the mainland.

Station name signage and system map signage at the stations are in the three languages used by the majority of visitors—English, Chinese (simplified) and Japanese (Katakana phonetization).

The northern terminus is just a few levels above HarbourFront MRT station and the nearby HarbourFront Bus Interchange. Just like Changi Airport and Promenade MRT stations, ticketing, turnstiles and platforms are all on the same level.

There are one track and two side platforms at this station. Like the dismantled Sentosa Monorail stations in the past and Ten Mile Junction station, it is currently the only train station in Singapore to feature an organised boarding system like the Spanish solution — passengers enter via one side of the train after passengers have alighted on the other side. After the trains enter the station, passengers alight on the right side, where there are faregates, ticketing machines and a ticketing counter.

In Waterfront Station, platform A handles Beach-bound trains, while platform B handles Sentosa-bound trains. There are two tracks and one island platform. As the line is left-hand drive, all train doors open on the right.

The station platform is 2 levels above ground. Below it is the concourse and ticketing counter; at street level is Resorts World Sentosa.

Imbiah Station is located in the middle of Sentosa next to Imbiah Lookout. Platform A handles Beach-bound trains, while platform B handles Sentosa-bound trains. There are two tracks and one island platform. As the line is left-hand drive, all train doors open on the right.

The station platform, located 2 levels above ground, is located along a minor road called Beach View and it is next to the giant Merlion. Below the platform is the concourse and ticketing counter; at street level is Sentosa Luge & Skyride, Images of Singapore, Tiger Sky Tower, Sentosa 4D Magix, Butterfly Park and Singapore Cable Car.

Beach Station is located between Siloso Beach and Palawan Beach at Sentosa. There is single track and one platform, Platform B which handles towards Sentosa which was connected to VivoCity.

The beaches, shops, sea sports, pubs, cafés, food court and restaurants are at street level; transfers to the trams are available at this station. The blue trams go to Siloso Beach while the green ones to get to Palawan and Tanjong Beaches.

The Sentosa Express is the first system to use Hitachi's small and straddle–type monorail with a capacity of about 184[1] passengers per train. With a total of six two-car, 25-metre-long[1] trains of different colours each—namely green, orange, blue, purple, pink and red; the pink and red trains were added to the original fleet of four only on 1 December 2009. The Yellow train is the maintenance train.

Everyday, four monorail colours will be picked to be deployed on this service while the other two remain in the depot.

On 4 December 2014, a technical fault caused power disruptions on the monorail and stalled a train during the nighttime; several passengers were evacuated.[5]