This article is about the symbol used by Singapore. For the heraldic device used by other countries such as the Philippines, see Sea-lion.
"Singa laut" redirects here. For the Indonesian film, see Singa Laoet. 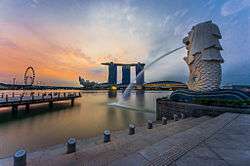 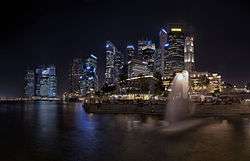 The Merlion Park viewed with the Singapore skyline in the background 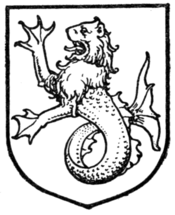 A sea-lion, illustrated in A Complete Guide to Heraldry (1909)

The Merlion (Malay: Singa-Laut) is a well known marketing icon of Singapore depicted as a mythical creature with a lion's head and the body of a fish. It is widely used as a mascot and national personification of Singapore.[1]

The Merlion was first used in Singapore as the logo for the tourism board.[2] The Merlion is similar to the heraldic sea-lion which occurs in a number of different artistic traditions.

The Merlion is the national personification of Singapore.

The symbol was designed by Alec Fraser-Brunner, a member of the Souvenir Committee and curator of the Van Kleef Aquarium, for the logo of the Singapore Tourism Board (STB) in use from 26 March 1964 to 1997[3] and has been its trademarked symbol since 20 July 1966. Although the STB changed their logo in 1997, the STB Act continues to protect the Merlion symbol.[4] Approval must be received from STB before it can be used. The Merlion appears frequently on STB-approved souvenirs.

On 15 September 1972, then-Prime Minister Lee Kuan Yew officiated the installation ceremony of the Merlion statue.[3] The original Merlion statue used to stand at the mouth of the Singapore River, at the tip of the current The Fullerton Waterboat House Garden with Anderson Bridge as its background. The Merlion is female.

It was conceptualised by the vice-chancellor of the University of Singapore (now known as National University of Singapore) then, Kwan Sai Kheong. Made from November 1971 to August 1972 by the late Singapore sculptor, Lim Nang Seng,[5] it measures 8.6 metres high and weighs 70 tons.[3][2] Its body is made of cement, skin from porcelain plates and eyes from small red teacups. The project cost about S$165,000.[3]

The completion of the Esplanade Bridge, in 1997, blocked the views of the Merlion from the Marina Bay waterfront.[3] By then, the original Merlion location was also no longer the entrance of Singapore River.[3] So, in 2002, the statue and its cub were relocated 120 metres to the current Merlion Park that fronts Marina Bay where it stands on a newly reclaimed promontory in front of The Fullerton Hotel.

Another solution considered—to raise the Merlion on a pedestal at its original location—was deemed unsuitable as the view would still be blocked by the bridge. Other possible relocation sites considered included Nicoll Highway Extension Bridge, Esplanade Park, Esplanade - Theatres on the Bay, a promontory at Marina Centre (near where Singapore Flyer is located now), a promontory site at Bayfront (near the tip of Marina Bay Sands integrated resort) and Kim Seng Park. However, all were either unsuitable or not technically feasible.[3]

The unprecedented feat of relocation began on 23 April 2002, and finished on 25 April. A carefully engineered journey required one barge, two DEMAG AC1600S cranes of 500 tonnes lifting capacity, plus a team of 20 engineers and workers on site. The entire statue was hoisted onto the barge, which then sailed to the new installation site at the current Merlion Park, near the mouth of Singapore River. During the voyage, the statue had to be hoisted from the barge, over the Esplanade Bridge and then back onto the barge, as it was too tall to pass underneath.

Exactly 30 years after it was officially launched, then-Senior Minister Lee Kuan Yew returned on 15 September 2002 to ceremonially welcome the Merlion again – this time in its new home. A viewing deck now stretches over the Singapore River, allowing visitors to pose for a photograph with a front or side view of the Merlion, including a new city skyline backdrop in the picture. The sculpture was aligned to face East, a direction advised to be most auspicious.[2] Relocated, the statue once more spouted water from its mouth, having stopped in its old location since 1998 due to a water pump malfunction. The Merlion now has a new two-unit water pump system with units working alternatively, so a partner is always on standby. The relocation and new site (four times larger than the original) cost S$7.5 million.[2]

From 5 June till 10 July 2006, the Merlion at Merlion Park underwent maintenance. The last one was right after its relocation. Dirt and stains were removed using high-pressure water streams, and various wear and tear of the statue was mended.[6]

The Merlion on Sentosa was designed and sculpted by an Australian Artist called James Martin. It is made of Glass Reinforced Cement (GRC) over a steel armature that is attached to the centre.[8]

The Merlion Park was temporarily turned into a single-unit hotel suite, as part of an artwork by Tatzu Nishi, for the duration of the 2011 Singapore Biennale.[9]

On Saturday, 28 February 2009 at about 4:26 pm the Merlion in the Merlion Park was struck by lightning. A breaking news from 938LIVE local radio showed an image with fragments from the Merlion's head on the ground.

Examination of the damage was done quickly with wooden scaffolding set up on Sunday, 1 March 2009 for workers to take a closer look at the hole. The incident happened as a result of the lack of lightning protection on the Merlion itself.[10] 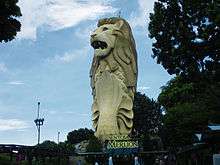 The Merlion on Sentosa, Singapore 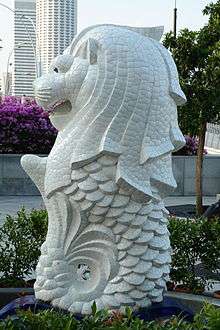 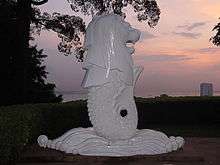 The Merlion on Mount Faber 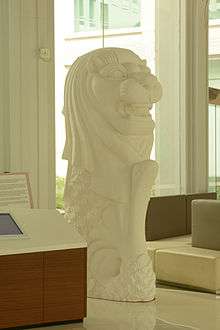 These five Merlions in Singapore are the only ones recognised by the STB:[3]

Also, a pair of Merlion statues were constructed by the Ang Mo Kio Residential Committee in 1999. Those sit at the entrance of the car park along Ang Mo Kio Ave 1.[13]

Due to the influence of overseas Singaporeans, Singapore investors and friends of the country, variations of the Merlion statue can be found in Japan, China and the United States.[2]

The Merlion in art and popular culture 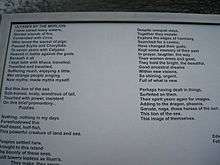 Edwin Thumboo's poem on display beside the Merlion statue

In anime and TV series

As mascots and performance characters