The 2008 presidential campaign of Bill Richardson, New Mexico Governor Bill Richardson announced his candidacy on January 21, 2007, for President of the United States on ABC's This Week with George Stephanopoulos, by virtue of forming a presidential exploratory committee.[1] Richardson, who is of Hispanic descent, joined a diverse field for the Democratic nomination, which already included an African American in Senator Barack Obama of Illinois and a female in Senator Hillary Clinton of New York and became the first individual of Hispanic descent to mount a nationwide campaign for president. He withdrew from the race on January 10, 2008 after only placing fourth in the Iowa and New Hampshire primaries, the first two of the season.

Leading up to announcement

In 2006, the Associated Press reported that Richardson informed party leaders that he intended to run in the 2008 U.S. presidential election.[2] In early December 2006 Fox News claimed that Richardson told DNC leaders he would run for president,[3] but Richardson said he would actually wait to decide in January 2007.[4] 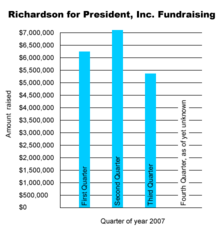 Bill Richardson's fundraising efforts for the first three quarters of 2007.

On January 21, 2007, Richardson told George Stephanopoulos on ABC's This Week that he was launching a Presidential Exploratory Committee, his first official step of seeking the 2008 Democratic party nomination.[1]

Although already campaigning for months before, Governor Richardson formally announced his candidacy on May 21, 2007 in Los Angeles,[5] saying, "The United States faces huge challenges, but also huge opportunities. I am running for president because these times call for a leader with a proven track record, and a demonstrated ability to bring people together to tackle our problems at home and abroad, I am that person, not because I say so, but because of what I have done, and what I can do for the American people."[6] 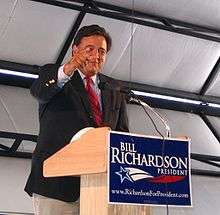 On March 4, 2007, while attending a campaign breakfast event in Des Moines, Iowa, Richardson said he believed that the Democratic contest will be decided very early — by the end of January 2008 after the first four state contests (Iowa, Nevada, New Hampshire, and South Carolina). "I believe the first four states, with Iowa and New Hampshire being the top ones, will determine who the president is. I always felt that way. What the pundits say about who's in, who's out, who's got the most money doesn't matter. I have a sustained plan to introduce myself to the voters ... and so far I feel very satisfied. I feel I can do very well."

The Bill Richardson for President Exploratory Committee raised $6.3 million in the first quarter of 2007. As of April 1, 2007, the campaign had $5 million cash on hand.[7] This was the fifth highest amount raised among the eight candidates for the 2008 Democratic nomination.[8] 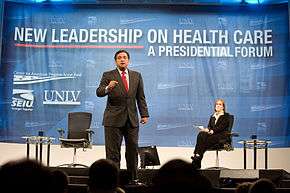 As part of a diplomatic mission, Richardson traveled to North Korea in early April 2007 for meetings with government officials and successfully recovered the remains of six U.S. servicemen in that country.[9][10] After this visit he was criticized by journalist Claudia Rosett for agreeing to a tour of the captured U.S. naval ship U.S.S. Pueblo;[11] Richardson had said after the tour that it was "a lot of propaganda, but we're guests here."[12]

With the early departure of Governor Tom Vilsack of Iowa, Richardson became the only candidate in the race for the Democratic nomination with executive experience, a characteristic that he believed would attract Iowa voters. After beginning the race with one percent in most national polls, he began rising to some degree, reaching five percent in three polls conducted in late February 2007, and in so doing, separating himself from other 'second tier' candidates. He was named the "candidate most likely to become a serious contender."[13] Similarly, he began to rise in polls of the early primary and caucus states; a Nevada poll had Richardson with 6%.[14] He also rose to ten percent in New Hampshire, only five points behind John Edwards.[15]

By August 12, 2007, Richardson had $7 million of campaign funds on hand, placing him with the fourth highest amount.[16]

By November 2007, Richardson was still struggling to escape the second tier of Democratic candidates, although upticks in his poll numbers in first-voting Iowa and New Hampshire led to speculation that he might be able to overtake stalled third-place runner John Edwards, especially in the latter state.[17]

On Wednesday, January 9, 2008, it was reported that Richardson would announce his withdrawal from the 2008 presidential race on Thursday.[18] He officially announced his withdrawal on January 10 at 3:00 PM Eastern Time.

Richardson speaks during the final day of the 2008 Democratic National Convention in Denver, Colorado.

On March 21, 2008, the Associated Press reported that Richardson would endorse Barack Obama for president. Richardson endorsed Obama, calling him "a once in a lifetime leader".[19] Commentator and Clinton ally James Carville famously compared Richardson to Judas Iscariot for the move.[20] Richardson responded in a Washington Post article, feeling "compelled to defend [himself] against character assassination and baseless allegations."[21]

It was reported on March 25, 2008 that Governor Bill Richardson's presidential campaign refunded nearly $789,000. However, his campaign's bank account shows a balance of only $40,939. With a debt of $420,848, Richardson must now find a way to refund company executives, state lobbyists, and other various campaign donors with new, freshly raised funds. There is no report on what the donated money was spent on.

Throughout the primaries and caucuses, Richardson lagged behind fellow Democrats in polling data. Despite campaigning heavily in early states such as Iowa, New Hampshire, and Nevada, Richardson continued to barely register in polls. Richardson competed only in the Iowa caucuses and New Hampshire primary due to his withdrawal prior to caucuses in Nevada.

When Richardson first began his campaign, his Iowa poll numbers shot up considerably. By early September, Richardson was polling between 10%-12%.[22] Despite polling lower than Clinton, Edwards, or Obama, Richardson's polling in September far exceeded the fellow insurgent candidacies of Chris Dodd, Dennis Kucinich, and Joe Biden. However, Richardson's support fell throughout November and December, and by late December, Richardson was fighting with Biden for 4th place in Iowa (both polled between 4 and 7% in December.)

Ultimately, however, Richardson's support, like the support of most other candidacies other than Clinton, Obama, and Edwards, collapsed in Iowa. On Caucus Night, Richardson beat Biden for fourth, but finished with 5,278 state delegates, or 2% of the vote, and received no delegates to the DNC.

Much like Iowa, Richardson started off the New Hampshire campaign with promise. By late December Richardson was polling with 11%, fighting with John Edwards who was polling around 14%-15% in late Dec.[23] However, similar to his Iowa campaign, Richardson's New Hampshire campaign collapsed on primary night. When all of the votes were counted, Richardson placed fourth with 13,269 votes of 5% of the vote compared with Clinton's 39%, Obama's 37%, and Edwards's 17%.[24]