This article contains detailed election results. For an introduction to the topic and simplified results, see Democratic Party presidential primaries, 2008

The results of the 2008 Democratic Party presidential primaries are the detailed outcomes of a series of contests by which members of the United States Democratic Party chose their candidate for the 2008 U.S. Presidential election. The contests are held in each of the fifty U.S. states, as well as the District of Columbia, Puerto Rico, American Samoa, Guam, the U.S. Virgin Islands, and Democrats Abroad. The outcomes include totals of delegates selected as well as popular votes

In order to secure the nomination at the convention, a candidate must receive at least 2,117 votes from delegates (a simple majority of the 4,233 delegate votes, bearing in mind half-votes from Florida, Michigan, Democrats Abroad and the territories of Guam, American Samoa, and the U.S. Virgin Islands).

At the time of Hillary Clinton's suspending her campaign early on June 7, 2008, the superdelegate count was 246½ for her, and 478 for Barack Obama, with 99 still uncommitted[1] of the 823½ total then existing.

The following table lists events that determine how many pledged delegates are allocated to each presidential candidate. Most states hold a single event to determine delegate allocation. For example, California's primary on February 5 determined how all 370 of that state's pledged delegates would be apportioned.

Some states, however, hold multiple events to determine delegate allocation. For example, Iowa uses a series of events to award pledged delegates. The precinct caucus held on January 3 provided an estimate of delegates to be awarded at later events, but the estimate changed as a result of the March 15 county conventions. Iowa delegates were not actually allocated to candidates until the district conventions on April 26 (when 29 of 45 delegates were awarded) and the state convention on June 14 (when the remaining 16 were awarded). In states with multiple events, like Iowa, the results for early events show the delegate split as it was projected at that time. The rows for later events show updated projections, and outdated projections are indicated with strikeout. In states with events that apportion some but not all of the state's delegates, both actual and estimated allocations are provided.

This table does not list nomination events that have no effect on the allocation of pledged delegates. For example, it does not list state conventions that determine which persons will fill the role of delegates but not the number of delegates awarded or to whom the delegates are pledged. 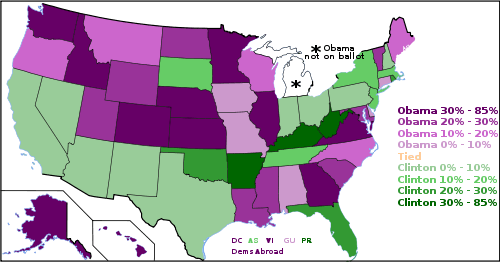 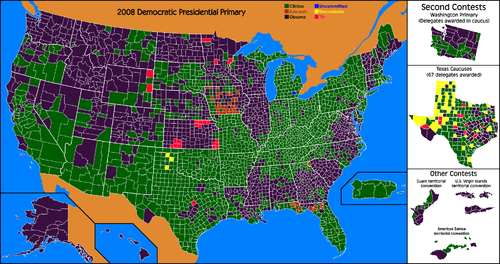 Popular vote, first-place results by county. Green for Clinton, purple for Obama, orange for Edwards. (First place may be a plurality, less than 50 percent).

This section reports popular vote data for the two leading candidates, Barack Obama and Hillary Clinton. Officially, the popular vote does not matter in the Democratic presidential nomination. However, political experts sometimes look to the popular vote as an indicator of candidate support and momentum. News media frequently report the popular vote on election night, declaring states "won" on this basis. Superdelegates may also consider the popular vote when making their decision about whom to support. Nevertheless, the popular vote count presents many problems and should be interpreted carefully.

After winning West Virginia, the Clinton campaign claimed a lead in the popular vote. However, the math behind this claim relied upon a number of points that were disputed by neutral political observers and by the Obama campaign.[10][11][9][12] Most problematically, the Clinton campaign count gave Clinton 328,309 votes and Obama 0 votes in the disputed Michigan primary.

The popular vote is easiest to tally in primary elections, where a simple vote for a candidate is recorded. In caucuses, the "popular vote" is often interpreted as the number of supporters who vote for each candidate at the conclusion of precinct-level caucuses. The table uses the official "popular vote" reported in all primary states and in the caucus states of Alaska, American Samoa, Colorado, Idaho, Minnesota, North Dakota, Nebraska, Hawaii, Wyoming, and Guam. Official numbers were not reported in the caucus states of Iowa, Nevada, Washington, and Maine. These four states have been estimated by RealClearPolitics based on other information released by the states.[13] In Texas, two-thirds of pledged delegates were selected through a primary, while one-third were selected through caucuses. However, voters were eligible to participate in the caucuses only if they also voted in the primary, so RealClearPolitics used the primary results and ignored the caucus in determining the popular vote.

Nationwide, the RealClearPolitics tally counted one caucus participant as equal to one primary participant. However, turnout is generally lower in caucuses, and as a result, the popular vote may overweight the influence of primary states.[14] For example, Hawaii and Rhode Island have similar populations, but the opinion of Rhode Islanders is weighted more heavily in the popular vote total. Clinton won the Rhode Island primary 58-40% and received 33,600 more votes than Obama. In contrast, Obama won the Hawaii caucuses 76-24%, but received only 19,500 more votes than Clinton.[13] Thus, some researchers argue that the popular vote underestimates the depth of Obama's support in caucus states.[15] If these states were to hold primaries and Obama were to win by a similar margin, his popular vote total would be considerably higher.[15] However, Clinton argued that she would have done better in these states if primaries were held.[16]

Florida and Michigan were penalized by the Democratic party, and under the rules as they existed at the time of the elections, the delegates were not to be seated at the Democratic Convention. Toward the end of the primary season, on May 31, the Democratic National Committee restored "half votes" to the disputed primaries, as well as accepting a reapportionment of Michigan delegates proposed by the state party.

In Florida, where both candidates pledged not to campaign, Clinton beat Obama 50-33% in the disputed primary. In Michigan, where Obama and other candidates removed their name from the ballot, Clinton won against "Uncommitted" 55-40%. Exit poll respondents said that if all candidates had been on the ballot, they would have voted 46% Clinton, 35% Obama, 12% Edwards, 3% other.[17] These results do not record the preferences of voters who chose to stay home, believing that their votes would not count.

The Clinton campaign argued that popular vote totals should include Florida and Michigan and that Obama should receive 0 votes in Michigan.[9] Obama's supporters, and some neutral observers, countered that his standing would have improved in these states if the race had been contested normally and that most or all of the "uncommitted" votes in Michigan should be counted as votes for him.[12] Obama argued that the nullified primaries do not represent a true test of popular support, noting that primaries where the candidates are not allowed to campaign amount to little more than a "referendum on name recognition".[18]

Finally, the nomination was decided by delegates under the Democratic Party's rules, so the candidates campaigned to maximize their delegate advantage. If the nomination were decided by popular vote, they likely would have campaigned differently, in order to run up the vote in populous states like New York and Illinois. House Speaker Nancy Pelosi has said that the popular vote should have no effect under the current rules: "It’s a delegate race. The way the system works is that the delegates choose the nominee."[19] Obama's chief strategist suggested that the Clinton campaign's focus on the popular vote was a distraction tactic: "When they started off, it was all about delegates.... Now that we have more delegates, it’s all about the popular vote. And if that does not work out, they will probably challenge us to a game of cribbage to choose the nominee."[19] Nevertheless, polls have shown that a plurality of Democrats think superdelegates should consider the popular vote when deciding which candidate to support.[20]

The table below presents various combinations of the "popular vote," accounting for some, but not all, of the problems noted above. The source for the popular vote totals in each state is RealClearPolitics,[13] which aggregates data from official state results and news sources. Not all combinations are reported, only those most commonly cited as popular vote estimates. For example, the table does not reflect exit poll findings on how many voters would have voted for Obama had Obama's name been on the Michigan ballot, since there are many ways to generate this estimate.