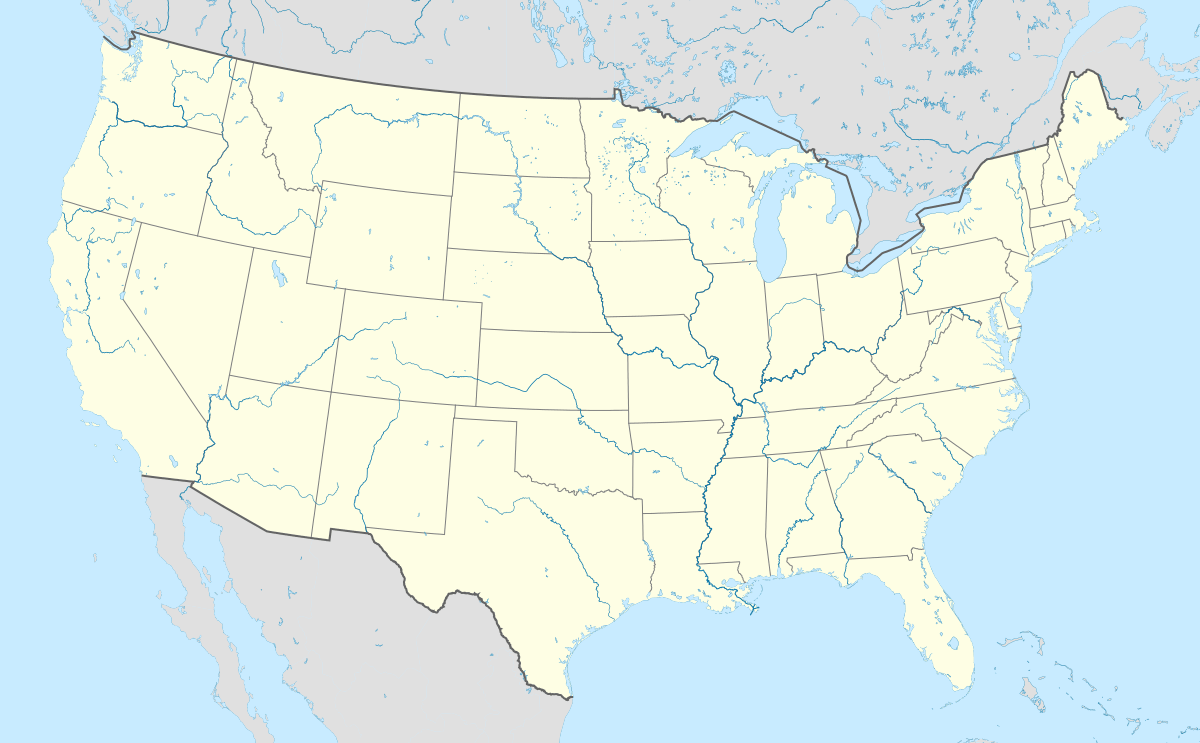 The United States 2008 Republican National Convention took place at the Xcel Energy Center in Saint Paul, Minnesota, from September 1, through September 4, 2008.[1] The first day of the Republican Party's convention fell on Labor Day, the last day of the popular Minnesota State Fair, though because of Hurricane Gustav, this day was mostly a call for action to help victims and formal, required activities; most of the politicking and partying did not start until Tuesday, the second scheduled day.

President George W. Bush did not attend the convention (although he did appear by satellite), in order to oversee relief efforts to help citizens recover from Hurricane Gustav.[3] The attending delegates at the convention nominated Senator John McCain from Arizona for President and Governor Sarah Palin of Alaska for Vice President. 1,191 pledged delegates were necessary for candidates to win the respective nominations.

The two women appeared together and delivered short remarks to encourage support for hurricane relief efforts.[7] 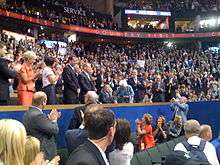 Members of the Bush and McCain families when former President George H.W. Bush was honored on September 2, 2008 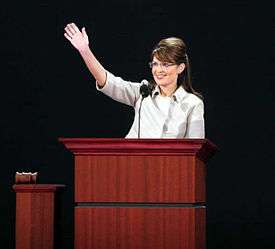 The floor of the 2008 Republican National Convention

The 27 electoral college votes from Minnesota, Wisconsin and Iowa as a block—equal in value to Florida's—was judged by the University of Minnesota Elections project to be subject to swing toward either major party.[18] Even so, Minnesota has not gone to the Republicans since the 1972 election when during his reelection President Richard Nixon won every state except Massachusetts and the District of Columbia. In 1984, during his reelection, President Ronald Reagan was victorious over Minnesota's "favorite son," Walter Mondale, in all states except Minnesota, and the District of Columbia.

With the landfall of Hurricane Gustav on the U.S. Gulf Coast, the White House canceled the planned appearances of President Bush and Vice President Dick Cheney.[19] Governors Bobby Jindal of Louisiana and Rick Perry of Texas skipped the convention to remain in their states during the hurricane's landfall.[20][21] The Monday, September 1, 2008, schedule was compressed to two hours from seven.[19] McCain called on the party to reduce partisan activities ahead of the hurricane's arrival.[19] The Republican Party chartered a DC-9 to fly convention delegates representing the affected areas back home to their families.[19] The last time a major hurricane struck in a Presidential-election year was Hurricane Andrew in 1992, which hit South Florida four days after the Republican Convention in Houston, Texas.[20][22]

On March 26, 2008, the National Football League and NBC agreed to move the kickoff time of a September 4 season-opening football game to 7:00 p.m. EDT instead of 8:30 p.m. EDT to accommodate the convention.[23] The game ended relatively on time, at 10:01 p.m. EDT, with NBC Sports handing off to NBC News within moments of the end of the game. According to Nielsen Media Research, 38.9 million Americans watched McCain deliver his acceptance speech—a half million more than tuned in to see Obama the previous week.[24]

Palin was nominated for Vice President by voice vote on September 4, 2008.[31]

Several early predictions made by the National Hurricane Center showed Minneapolis-St. Paul on the predicted ground track of Hurricane Gustav. Gustav would have long been extra-tropical by the time it reached the area, it could have caused a significant impact to the convention due to rain. Most of the convention's activities were curtailed as Gustav neared, and President Bush canceled his plans to attend the convention. As the hurricane moved inland, its track shifted well to the east missing the area by several hundred miles. 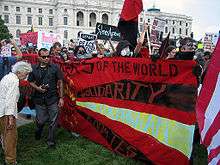 Antiwar march at the Minnesota State Capitol on September 1, 2008

Approximately 10,000 largely peaceful protesters marched against the war in Iraq and 2,000 more to end homelessness and poverty.[32][33] They represented a number of organizations opposed to the Republican Administration including the Poor People's Economic Human Rights Campaign, Veterans for Peace, Iraq Veterans Against the War, Military Families Speak Out, the Teamsters, Code Pink, the American Indian Movement and the RNC Welcoming Committee.[34][35] About 1,000 people in place for the third major march, and the last to be sanctioned, were stopped on Thursday, September 4, 2008, by police because they attempted to begin their march after the time their march permit expired.[36] The Anti-War Committee, which supports nonviolent action and civil disobedience and had cooperated with anarchist groups, had organized and publicized the march to protest at the time of McCain's acceptance speech, which was in violation of the court-approved protest permit time.[37] 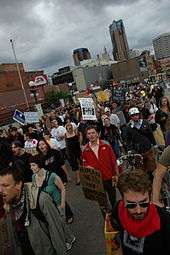 Ron Paul's Campaign for Liberty and 10,000 Ron Paul supporters attended the Rally for the Republic, a protest convention on September 2, 2008, held a few miles from the Xcel Energy Center at the Minneapolis Target Center in direct contrast to the Republican National Convention.[38]

Several groups had been preparing to protest near the convention.[39] In early January 2008, protesters marched from the Minnesota State Capitol to the Xcel Energy Center in hopes of securing a protest permit.[40] The Saint Paul Police Department authorized the event, but only approved the permit through July 2008. On February 8 and February 9, 2008, antiwar protesters attended a weekend conference at the University of Minnesota to discuss the protests and antiwar rally.[41] On February 28, 2008, the Associated Press (AP) reported that the police department adopted new guidelines for the investigation of protest groups. The police department said that this did not have anything to do with the convention.[42]

In early March 2008, the city of Saint Paul gave the first permits to protest organizers.[43] The city had said that it was not going to follow the "New York model" for protest security, referring to the tactics the New York City Police Department used for the 2004 Republican National Convention protest activity.[44] Later, on March 24, 2008, the antiwar group the Coalition to March on the RNC and Stop the War, sued the city, claiming their free speech and due process rights were denied by the vagueness of the permits which did not specify a permitted route for their march.[45][46] On July 16, 2008, a Federal judge upheld the terms of the permit.[47] And when the time came on September 2, 2008, police led the Poor People's Economic Human Rights Campaign for two hours on a 2.5 miles (4.0 km) trek away from the convention which had been less than 1 mile (1.6 km) from their starting point.[48] 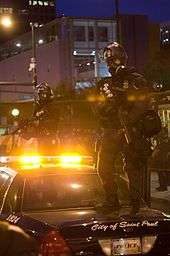 Before the convention began, search warrants were executed by Ramsey County Sheriff Bob Fletcher[49] in coordination with the Federal Bureau of Investigation.[50] Six persons who were a part of the organizing group, the RNC Welcoming Committee, were arrested when police executed search warrants on a handful of homes in Minneapolis and Saint Paul during the weekend preceding the convention.[51]

Media outlets reported on several of the searches.[52] Given the nature of the probable cause for the warrant applications, a district court judge authorized no-knock warrants. Police entered the homes wearing body armor with weapons drawn, which is standard for no-knock warrants.[52] RNC Welcoming Committee members detained at the group's headquarters, located in an old theater on Saint Paul's West Side, were ultimately arrested by Ramsey County Sheriff Bob Fletcher of misdemeanor fire code violations.[52]

On the first day of the convention, a group of protesters stood in front of approximately 30 to 40 delegates from Connecticut in an attempt to prevent them from entering the convention. Paramedics had to treat an 83-year-old member of the delegation for breathing problems when his credentials were ripped from his neck by a protester.[53] Additionally, a black bloc smashed windows of downtown businesses and slashed the tires several police cars, lit one police car on fire, and used a garbage dumpster as a battering ram against another. About 12 protesters were arrested.[53][54]

Minnesota Peace Team and police in Saint Paul on September 4, 2008

During the convention's first three days, more than 300[55] individuals were detained by police,[56] including journalists,[57] healthcare workers, and legal observers.[58] Some were released, but nearly half received felony charges.[58] Of these felony arrests, many cases were dropped or reviewed, sometimes for lesser charges, and about 21 were found to be prosecutable.[55] About 102 persons were arrested for unlawful assembly at a Rage Against the Machine concert in downtown Minneapolis.[59]

Over the four days of the convention, more than 30 journalists were arrested while reporting on the protests. The arrests included journalists from national organizations such as AP and Democracy Now!, journalists from local radio and TV stations, as well as university journalism students and advisors.[60]

Three journalists from Democracy Now!—including principal host Amy Goodman—were detained by police during their reporting on the protests.[61] According to a press release by Democracy Now!, Goodman was arrested after confronting officers regarding the arrest of her colleagues. The officers were in the midst of crowd control, and ordered Goodman to move back. She was arrested after refusing the officer's orders.[62] All were held on charges of "probable cause for riot".[63] Several news sources have criticized the arrest as unlawful and a violation of the freedom of the press,[64] and warned of the "chilling effects" of such measures.[65] Democracy Now! journalist Amy Goodman and producers Sharif Abdel Kouddous and Nicole Salazar prevailed in a lawsuit against the cities of Minneapolis and St. Paul and the U.S. Secret Service brought by the Center for Constitutional Rights, attorney Steven Reiss from Weil, Gotshal & Manges LLP in New York, and Albert Goins of Minneapolis. The federal lawsuit asserted that the government cannot, in the name of security, limit the flow of information by intimidating and arresting journalists who engage in constitutionally protected reporting on speech protected by the First Amendment, such as dissent or law enforcement activities. The settlement included compensation of $100,000 for the three journalists and an agreement by the St. Paul Police Department to implement a training program aimed at educating officers regarding the First Amendment rights of the press and public with respect to police operations — including police handling of media coverage of mass demonstrations — and to pursue implementation of the training program in Minneapolis and statewide.[66][67][68]

The final protest march was permitted for 2:00 to 5:00 p.m. on the final day of the convention. This meant that the last of the marchers needed to be back on capitol grounds by 5 p.m. By 4 p.m., the march had still not left the capitol grounds. Understanding that the protesters were interested in being near the Xcel Energy Center when delegates were, police offered a compromise: march leaders were told that if they started their march before 5 p.m., police would allow it to continue past the permit time. March organizers refused. When the final protest march permit expired at 5 p.m., overpasses over Interstate 94 leading into downtown from the state capitol were closed. Two hours later, when the final assembly permit on capitol grounds expired and protesters refused several commands to disperse, police used tear gas, smoke bombs, pepper spray, flash bangs, mounted police, paint marker rounds, and rubber bullets to prevent an antiwar march organized by the Anti-War Committee to march on the Xcel Energy center. This march would have been in violation of the court-approved march permits.[59][69][70] Between 300 and 400 people were arrested or held including 19 journalists, among them AP reporters Amy Forliti and Jon Krawczynski,[70] reporters from Twin Cities Daily Planet and The Uptake, and Paul Demko of The Minnesota Independent.[70][71][72] Total arrests of convention protesters numbered approximately 800, although only 15 cases resulted in criminal charges.[73] Several suits were started in U.S. District Court, claiming civil rights abuses by the St. Paul Police Department and other agencies involved in the RNC, particularly the Minneapolis Police Department and Ramsey County Sheriff's Office.[73] Search warrants were still being granted into 2009 in relation to the events that transpired during the 2008 RNC.[74]

Both McKay and Crowder were arrested based on FBI surveillance and testimony by former-activist turned informant, Brandon Michael Darby[79] and Andrew C. Darst, also known as "Panda," "warchyld" or Killswitch. Darst is currently being charged in Ramsey County, MN, with two felony counts of first- and second-degree burglary as well as fifth-degree assault relating to a January 11, 2009, domestic disturbance.[80]