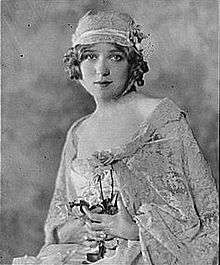 Mary Pickford wearing a boudoir cap and negligee in 1921

A boudoir cap is a form of lingerie hat that was popularly worn in the nineteenth and early twentieth centuries.[1] In its original form, the boudoir cap was worn over undressed hair,[2] and has been compared to the 18th century mob cap.[3][4] Particularly towards the end it was designed to be worn in the privacy of the boudoir with negligees or nightwear.[3] It was often made from lightweight lingerie-type fabrics such as muslin or net and trimmed with silk ribbon and lace.[3] During its later revival in the 1910s and 1920s, it was used to protect short hairstyles whilst sleeping,[5] or first thing in the morning as ideal "for the smart bedroom woman."[6] Towards the end of the 1920s and into the 1930s, the boudoir cap evolved into a form of decorative hairnet.[5]