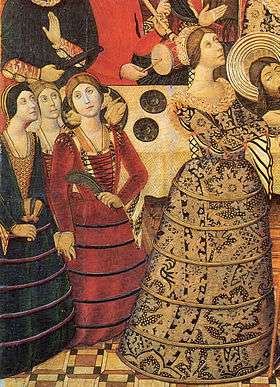 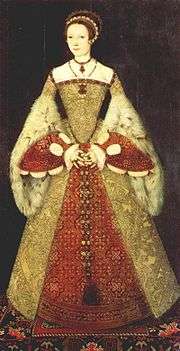 Tudor gown showing the line of the Spanish farthingale: portrait of Catherine Parr, 1545. 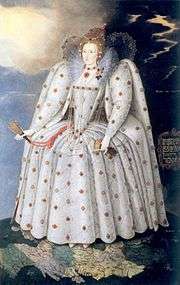 Silhouette of the 1590s: Elizabeth I, the Ditchley portrait

A farthingale is any of several structures used under Western European women's clothing in the 16th and 17th centuries to support the skirts in the desired shape. It originated in Spain.

The Spanish verdugado, from which "farthingale" derives, was a hoop skirt originally stiffened with the subtropical Giant Cane; later designs in the temperate climate zone were stiffened with osiers (willow cuttings), rope, or (from about 1580) whalebone. The name verdugado comes from the Spanish verdugo, ("green wood", or the more modern meaning of "executioner").

The earliest sources indicate that Joan of Portugal started to use verdugados with hoops in Spain. Joan had provoked much criticism as she allegedly wore dresses that displayed too much décolletage, and her wanton behaviour was considered scandalous. When she started to use farthingales, court fashion followed suit. As Joan had two illegitimate children by Pedro de Castilla y Fonseca, rumors abounded that she used the farthingale to cover up a pregnancy. The earliest images of Spanish farthingales show hoops prominently displayed on the outer surfaces of skirts, although later they merely provided shape to the overskirt. Catherine of Aragon brought the fashion into England on her marriage to Arthur, Prince of Wales, in 1501.

Spanish farthingales were an essential element of Tudor fashion in England, and remained a fixture of conservative Spanish court fashion into the early 17th century (as exemplified by Margaret of Austria), before evolving into the guardainfante of 17th-century Spanish dress. 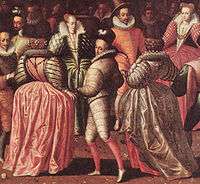 The French farthingale, also known as the wheel farthingale, originated in court circles in France; it was introduced in the late 1570s to England.

Randle Cotgrave, in his Dictionarie of the French and English Tongues (1611), defined the French farthingale as “the kind of roll used by such women as weare no Vardingales.” Several wardrobe accounts and tailors' bills of the late 16th century give us an idea of what these rolls were made of: they were stuffed with cotton and rags, and stiffened with hoops of whalebone, wire or ropes made of bent (a small reeds) buckram (stiff canvas) is the most commonly mentioned material. Other references describe the rolls being starched.[1]

There are no extant examples of this style of undergarment, and only one illustration, a satirical Dutch engraving of c1600, that shows the bumroll being affixed by a tiring-woman.[2] From contemporary references, and the visual cues provided by the engraving, it appears to have consisted of a bolster-like roll either stuffed or held out with reeds which, being fastened around the hips, served the purpose of widening the skirts at the hip area, creating drapes.

Some modern costumers conjecture that the French farthingale and the "great farthingale" were one and the same garment, the difference in shape and construction being due to changes in fashion from the 1580s to the 1590s.

The great farthingale (a.k.a. the drum or wheel or cartwheel or (rarely) Italian or Catherine-wheel farthingale in modern times) is the style of farthingale that evolved from the French Farthingale discussed above, and which became fashionable in the 1590s.

Although there are also no surviving examples of this type of garment, there are a number of references to a "Great Farthingale" in Queen Elizabeth I's wardrobe accounts during the time when this style was in vogue. "Great" in this context referring to the large circumference of the farthingale which was required in order to achieve the fashionable silhouette.

The great farthingale appears to have been worn at an angle ("low before and high behind") which visually elongated the wearer's torso while shortening her legs. Modern costumers conjecture that it probably consisted of one or more large hoops with horizontal stiffeners which radiated from around the waist in order to produce a flat platter-like shape when supported underneath by the "bumroll" or "French farthingale" described above.

The great farthingale remained in fashion into the first few decades of the 17th century, mostly for court functions, after which the fashion died out.