For other uses, see Girdle (disambiguation). 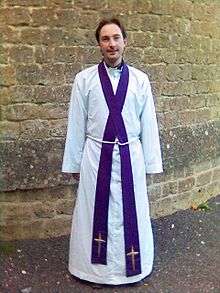 An Anglican Christian priest wearing a white girdle around his waist to hold his alb and stole in place.

The term girdle, meaning "belt", commonly refers to the liturgical attire that normally closes a cassock in many Christian denominations, including the Anglican Communion, Methodist Church and Lutheran Church.[1] The girdle, in the 8th or 9th century, was said to resemble an ancient Levitical Jewish vestment, and in that era, was not visible. In 800 AD, the girdle began to be worn by Christian deacons in the Eastern Church.[2]

The girdle, for men, symbolizes preparation and readiness to serve, and for women, represents chastity and protection;[3] it was also worn by laypersons in the Middle Ages, as attested in literature. For example, the hagiographical account of Saint George and the Dragon mentions the evildoer being tamed with the sign of the cross and a girdle handed to Saint George by a virgin.[4]

Since the 20th century, the word "girdle" also has been used to define an undergarment made of elasticized fabric that was worn by women. It is a form-fitting foundation garment that encircles the lower torso, perhaps extending below the hips, and worn often to shape or for support. It may be worn for aesthetic or medical reasons. In sports or medical treatment, a girdle may be worn as a compression garment. This form of women's foundation wear replaced the corset in popularity, and was in turn to a large extent surpassed by the pantyhose in the 1960s. 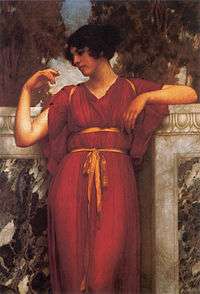 The men among the Greeks and Romans wore the girdle upon the loins, and it served them to confine the tunic, and hold the purse, instead of pockets, which were unknown; girls and women wore it under the bosom. The Strophium, Taenia, or Mitra occurs in many figures. In the small bronze Pallas of the Villa Albani, and in figures on the Hamilton Vases, are three cordons with a knot, detached from two ends of the girdle, which is fixed under the bosom. This girdle forms under the breast a knot of ribbon, sometimes in the form of a rose, as occur on the two handsomest daughters of Niobe. Upon the youngest the ends of the girdle pass over the shoulders, and upon the back, as they do upon four Caryatides found at Monte Portio. This part of the dress the ancients called, at least in the time of Isidore, Succinctorium or Bracile. The girdle was omitted by both sexes in mourning. Often when the tunic was very long, and would otherwise be entangled by the feet, it was drawn over the girdle in such a way as to conceal the latter entirely underneath its folds. It is not uncommon to see two girdles of different widths worn together, one very high up, the other very low down, so as to form between the two in the tunic, a puckered interval; but this fashion was mostly applied to short tunics. The tunic of the Greek males was almost always confined by a girdle.

Girdles of iron, to prevent obesity, were worn by some of the Britons. From the Druidical eras the cure of diseases, especially those of difficult parturition, were ascribed to wearing certain girdles. Among the Anglo-Saxons, it was used by both sexes; by the men to confine their tunic, and support the sword. We find it richly embroidered, and of white leather. The leather strap was chiefly worn by monks.[5] 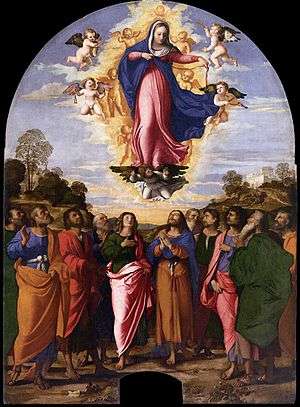 In Christian belief, the Girdle of Thomas is said to be handed down by the Virgin Mary during her Assumption
Further information: Cincture and Zone (vestment)

As a Christian liturgical vestment, the girdle is a long, rope-like cord tied around the waist over the alb or cassock. The Parson's Handbook describes the girdle as being made "generally of white linen rope, and may have a tassel at each end. About 12 ft. 6 in. long is a very convenient size if it is used double, one end being then turned into a noose and the tasselled ends slipped through. The girdle, however, may be coloured."[6] Christian monastics would often hang religious texts, such as the Bible or Breviary, from their girdles and these became known as girdle books. In addition, they would often knot the ends of the girdle thrice, in order to represent the "vows of poverty, chastity, and obedience."[3] As such, within the Christian Church, the girdle, in some contexts, represents chastity and within the Hebrew Bible, "Proverbs 31 provides biblical reference to the ancient practice of girdle making by virtuous chaste women".[7] In the New Testament, "Christ referred to the girdle as a symbol of preparation and readiness for service (Luke 12:35-38)":[3]

Saint Paul, in Ephesians 6:14 also references the term, stating "Stand therefore, first fastening round you the girdle of truth and putting on the breastplate of uprightness", further buttressing the concept of the girdle as a symbol of readiness.[8] Many Christian clergy, such as Anglican priests and Methodist ministers, use the following prayer when wearing the girdle:

Gird me, O Lord, with the girdle of purity, and quench in me the fire of concupiscence that the grace of temperance and chastity may abide in me.[3]

Beer (1999: p. 318) describes the bone girdle as the 'netted bone apron and belt' as vesture of the Dakinis and Heruka of the Cham Dance and Gar Dance of Tibetan Buddhism sacred ritual dance performances:

The bone ornaments worn in these ritual dances are exquisitely carved - especially the netted bone apron and belt, which are commonly adorned with intricately carved images of dakinis.[11] 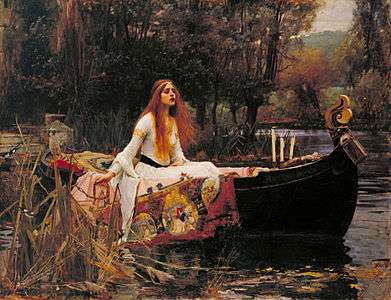 The Lady of Shalott, with a medieval girdle around her waist (John William Waterhouse, 1888)

In literature, girdles are often portrayed as magical, giving power and strength if worn by men, and protection if worn by women. Several scriptures in the Bible make use of the girdle as a symbol for readiness and preparation. Ishtar, a Babylonian goddess, wore a fertility girdle, which, when it was removed, rendered the universe barren. Hercules wrestled with the Amazon queen for her girdle in his Greek myth. Aphrodite, or Venus in Roman mythology, also wore girdles associated with lechery in later poetry.[12]

For men a girdle was often used to hold weapons. It also gave them freedom to move in a fight, unlike other types of clothing. Both of these are thought to carry the connection of power to the man's girdle in literature. For example, Odysseus wears a girdle which allows him to swim for three days straight, and a girdle worn by Thor doubles his strength.[12]

Later, for women, the girdle became a sign of virginity, and was often considered to have magical properties. Monsters and all types of evil are recorded as being subdued by girdles in literature, a famous one being the dragon slain by Saint George. Marriage ceremonies continued this tradition of girdles symbolizing virginity by having the husband take the wife's girdle, and prostitutes were forbidden to wear them by law in historic France. Often in literature, women are portrayed as safe from sexual or other attack when wearing a girdle, but suddenly vulnerable if it is missing or stolen.[12]

The 20th century women's girdle attracts various references in literature, often in a disparaging way. For example, Marilyn French in her classic book, The Women's Room, is very critical not only of the girdle itself, but also of the virtual compulsion to wear one, a compulsion which existed until the late 1960s. In John Masters's Bhowani Junction, once the mixed-race Victoria Jones decides to opt for an Indian rather than British persona, she rejects her girdle as a "western garment". 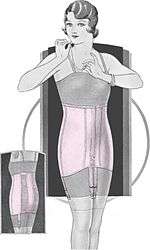 Historically and in anthropology, the girdle can be a scanty belt-shaped textile for men or women, worn on its own, often not holding a larger garment in place, and less revealing than the loin-cloth, as was used by Minoan pugilists.

Constructed of elasticized fabric and sometimes fastened with hook and eye closures, the modern girdle is designed to enhance a woman's figure. Most open-bottom girdles extend from the waist to the upper thighs. In the 1960s, these models fell from favor and were to a great extent replaced by panty girdles, which resemble a tight pair of athletic shorts. Both models of girdles may include suspender clips to hold up stockings.

Girdles were considered essential garments by many women from about 1920 to the late 1960s. They created a rigid, controlled figure that was seen as eminently respectable and modest. They were also crucial to the couturier Christian Dior's 1947 New Look, which featured a voluminous skirt and a narrow, nipped-in waistline, also known as a wasp waist.

Later in the 1960s, the girdle was generally supplanted by the pantyhose. Pantyhose replaced girdles for many women who had used the girdle essentially as a means of holding up stockings. Those who wanted more control purchased "control top" pantyhose.

Girdles and "body shapers" are still worn by women to shape their figure with a garment. Some of these garments may incorporate a brassiere, becoming functionally equivalent to a corset. However, they do not incorporate boning and hence do not produce the constricted waistline characteristic of Victorian-era corsets.

In American football, a girdle is worn under the football pants to keep the hip, thigh, and tailbone pads in place, making the process of putting on the tight football pants easier. Older girdles resembled chaps, in that they covered only the front of the leg with pads, that snapped on. Modern girdles are essentially a tight pair of compression shorts with pockets for the pads. The girdle was also used in the Mesoamerican ballgame and is used in hockey (National Hockey League).