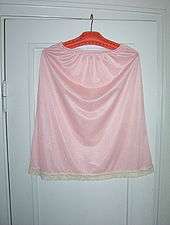 A silky pink half slip.

A slip is a woman's undergarment worn beneath a dress or skirt to help it hang smoothly and to prevent chafing of the skin from coarse fabrics such as wool. Slips are also worn for warmth, and to protect fine fabrics from perspiration. A full slip hangs from the shoulders, usually by means of narrow straps, and extends from the breast to the fashionable skirt length. A half slip hangs from the waist. It may also be called a waist slip or more rarely a petticoat.

Slips are often worn to prevent the show through of intimate undergarments such as panties or a brassiere. A slip may also be used to prevent a silhouette of the legs showing through clothing when standing in front of a bright light source. Other uses for slips are to make a dress or skirt hang properly, the prevention of chafing to the skin, to protect the outer garment from damage due to perspiration, or for warmth, especially if the dress or skirt is lightweight and thin. In very warm and/or humid climates a slip made from 100% cotton may be desired.

Slips fall into two major categories. A full slip is hung from the shoulders by straps that extend down to the top of the breast area. Full slips come in a variety of lengths; some extend down to the upper thigh, some to just above the knees, or just below the knees, while others go down to just above the ankles. A waist slip, sometimes referred to as a "half slip", is held on to the body around the waist by means of an elastic waistband. The waist slip is also available in the same lengths as the aforementioned full slip. Waist slips that extend down to just above the ankle are often called "formal", or "maxi" slips. "Mini slips" are yet another size option for waist slips. They were first introduced in the 1960s to wear under a mini skirt. American Maid manufactured waist slips that had vents and a rear zipper in addition to the elastic waistband. These slips were made of 50% nylon and 50% dacron polyester. As an alternative to the full slip, a waist slip with a matching camisole can be worn. There is also a type of "slip" designed to be worn under pants known as "pettipants". In addition to pants, a pettipant may also be worn under a dress or skirt, and like slips, they are mainly made of nylon.

Many slips have floral lace at the hem and/or the "vents" or "sideslits". Some of the older slips have decorations, such as a butterfly or flowers sewn into the fabric of the slip, and a pillowtab was also added to the waistband of a waist slip. The vast majority of slips are made of 100% nylon, while others are made from polyester, rayon, acetate, silk or in some cases cotton. Still, there are others made of blends, and the label of the garment might read, for example, "40% nylon, 35% rayon, 25% polyester". Nylon slips are often shiny in appearance, and are very smooth to the touch, while polyester slips can even be more shiny with a real slippery feel, especially charmeuse or "satin" slips. Although charmeuse slips have very attractive eye appeal, they are not as durable as nylon slips, and often tear very easily, especially when wet.

Slips made in the 1940s were mainly made of 100% rayon due to the war effort. In the late 1940s, some nylon slips began to appear on the market, and the vast majority of slips made in the 1950s were nylon. In the 1960s, slips were offered in a much more variety of colours, including multi-coloured slips. Slips with a floral print design were also made available. Some of the most well known slip brand names of the past are: Lorraine, Dior, Velrose, Mel-Lin, Shadowline, Wonder Maid, Warner's, Kayser, Maidenform and Van Raalte. There are well established slip/lingerie manufacturers still in operation today such as Vanity Fair, Vassarette, and Sliperfection.

Most of the slips made today are very plain, and are lacking in detail. Intricate decorations and lace designs are almost completely absent from modern day slips. Slips are not worn nearly as much as a few decades ago. Most transparent skirts and dresses now come with a lining, thus rendering slips redundant. Since the late 20th century, dresses closely based on slips have become very popular.[1]

The word "slip" has come to be used to refer to a number of other undergarments. In German and French the word “slip“ is commonly used for panties. The term is also sometimes used for the brief style of men's underwear.[2] In the incontinence product market, the word "slip" is often used as a euphemism for an adult diaper or nappy, typically the "all-in-one" style that is worn by fastening on with adhesive tapes, similar to a larger version of the disposable nappies/diapers worn by babies.[3]