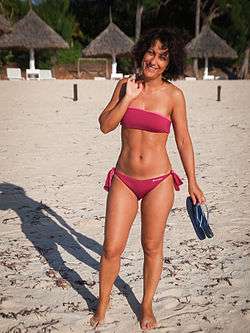 A bandeau (pl. bandeaux, diminutive of French: bande meaning "strip") is a garment comprising, in appearance, a strip of cloth. Today, the term most frequently refers to a garment that wraps around a woman's breasts in sports or swimwear, and now it is accepted as the top part of formal wear with pants or a skirt. It is similar to a tube top, but narrower. It is usually strapless, sleeveless and off the shoulder. It is commonly made from elastic material to stop it from slipping down, or is tied or pinned at the back or front. In the first half of the 20th century, a "bandeau" referred to a headdress, in the form of headache bands or headbands, and also to a simple brassiere.

The term is also used to refer to a wimple-like garment in the costumes of nuns, as well as of women of the medieval period.

The bandeau emerged as the top part of a two-piece swimsuit during the 1940s. In the 1950s the bandeau incorporated foundation so as to structure (or improve) the contours of the body, while still retaining a relatively simple circle or band shape, emphasizing the bare midriff. Its popularity in swimwear declined during the string bikini era, but it reappeared in the 1980s, especially with Spandex and other stretch fabric blends. Side stays, v-wire in the center front, O-rings, and the twisted top are popular design elements.[1]

In modern sports and swimwear, a bandeau is a strapless garment worn around a woman's breasts. It may be fastened in the front or back or be sufficiently elastic so as not to need a fastener at all. A bandeau may come with a detachable halter strap, for extra support. A strapless bandeau, or tube top, was also worn as casual wear and sports wear starting in the 1970s, and is sometimes worn as part of a sportswear ensemble.[1]

The ancient Roman Villa Romana del Casale (286–305 AD) in Sicily contains one of the earliest known illustrations of a bikini.

Wearing a bandeau to support a woman's breasts may date back to ancient Greece,[5] where they were called apodesmos (Greek: ἀπόδεσμος[6]), later stēthodesmē (Gr: στηθοδέσμη[7]), mastodesmos (Gr: μαστόδεσμος[8]) and mastodeton (Gr: μαστόδετον[9]), all meaning "breast-band". It consisted of a band of wool or linen that was wrapped across the breasts and tied or pinned at the back.[10][11]

As a silhouette the bandeau was also worn in Roman times.[1] Archaeologist James Mellaart described the earliest bandeau-like costume in Çatalhöyük, Anatolia in the Chalcolithic era (around 5600 BC), where a mother goddess is depicted astride two leopards wearing a costume somewhat like a modern bandeau-style bikini.[12][13] In the Greco-Roman world, women athletes wearing two-piece garments were depicted on urns and paintings dating back to 1400 BC.[14]

In the floor of Coronation of the Winner hall of Villa Romana del Casale, a Roman villa in Sicily that dates from the Diocletian period (286–305 AD), mosaics depict young women dressed in bandeau-like garments participating in weightlifting, discus throwing, and running ball games,[15][16] but not swimming. The mosaic features ten maidens who have been anachronistically dubbed the "Bikini Girls".[17][18] Other Roman archaeological finds depict the goddess Venus in a similar garment. In Pompeii, depictions of Venus wearing a bikini were discovered in the Casa della Venere,[19][20][21] in the tablinum of the House of Julia Felix,[22] and in an atrium garden of Via Dell'Abbondanza.[23]

In the 1920s the term was applied to a simply shaped brassiere, usually of a soft fabric and delicate trimmings providing little support or shaping. The design was patented in 1916 in the United States by Edgar Guggenheim and resembled the contours and wrapping effects of the scultetus binder used in hospitals.[24][25] It was sometimes made from an elastic material to flatten or suppress the breasts in the style of the period. When the "boyish" silhouette went out of fashion, the word "brassiere" or later "bra" became the term for more shapely support garments.

The term bandeau also refers to the thin headband traditionally worn—until recently—underneath and supporting the veil by the nuns of many Catholic religious institutes. Together with the wimple (which covers the cheeks and neck) and the white coif to which it would be attached, it was the common headdress of a respectable woman in Medieval and Renaissance Europe.