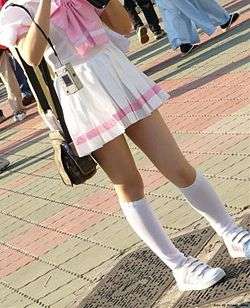 Knee highs are hosiery that cover the feet and legs up to the knee. A fashion accessory for a casual and classic cool or warm weather apparel.[1] Typically worn by women in many societies, they are sometimes worn with modern semi-formal attire. Unlike ordinary socks, they are generally made of nylon or other stocking materials. There were also different types and uses of knee highs for men.[2]

Knee highs became popular during the 1960s and 1970s with the increase in popularity of the miniskirt. Knee highs at times form a part of girls' school uniforms. They come in many colors and patterns and transparency levels. They are more popular in cold weather, because they keep the feet and lower legs warm. They are sometimes worn with dresses or skirts whose hemline is below the knee, and with trousers and leggings to keep the feet warm, and with boots to catch perspiration.

The Greeks, Egyptians, Romans, and Europeans wore articles of clothing similar to knee highs. It was during the Roman Empire that the first type of knee highs was introduced. At the time men and women wrapped their feet with cloth and bind leather straps around their feet up to the calves. It was done in order for warmth and protection. Later on, knee highs were bought and sold and became a fashion accessory. During the 1920s knee highs become popular in America. In the 1960s they became a fashionable accessory.[3]

In the British army and the navy it was necessary for men to wear long woolen knee highs. They were to worn for protection in the trenches, preventing foot rot. Many women sent long knitted socks to the troops during both World Wars.